Swan Lake has a remarkable history: from the poor reception of Julius Reisinger’s original production in 1877 on to the seminal re-working in 1895 by Petipa / Ivanov, and now the most famous work in the ballet canon. As one promoter told me once, “Company X can bring anything, as long as it’s called Swan Lake.” Alongside the classical ballet versions, alternative creations have sometimes used Tchaikovsky’s famous score, including Matthew Bourne’s record breaking all male swans production. And some have abandoned the score such as Garry Stewart’s modern dress and music version Bird Brain. Perhaps the most remarkable reimagining was Sasha Papalayev’s satirical romp through the history of the Soviet Union, staged in Tallinn’s Kanuti Gildi Saal. Why was it called Swan Lake? Because a Bolshoi performance was played continuously on TV during the attempted coup against Gorbachev in an attempt to sooth the people.

There is an unwritten rule that classical ballet versions should adhere to much of the Ivanov choreographed white swan Act 2 and the ball scene pas de deux. But then, directors can put their own mark on the production, especially the role of Prince Siegfried, including psychoanalytical versions with a deeply troubled son, perhaps imagining the swans narrative. Thomas Edur’s new production takes an alternative perspective with true love triumphing over evil, Siegfried and Odette surviving and the death of Rothbart. 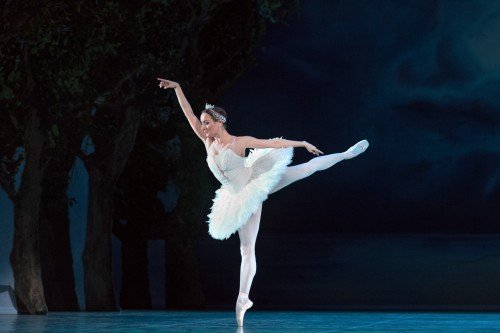 Although adhering to the Petipa / Ivanov overall framework, Edur has introduced a number of radical changes. After a prologue to explain Rothbart’s abduction and transformation of Odette, clarifying the narrative, there is a major clean-up of Act 1: gone are the tutor, his friend Benno and most of the mime is stripped away. In their place we see extensive and attractive ensemble dance. I enjoyed these revisions greatly, as Act 1 often drags for me. The mood of the ballet is set by Thomas Mika’s light, beautiful set with the dancers in simple, pastel coloured costumes, already pointing the way to a happy ending. We are introduced to a basically content Siegfried getting on very well with his guests and only a hint of melancholy at his yearning for love, while rejecting the Queen’s fairly mild demands that he marry. The pas de trois featured a strong cast of Marika Muiste, Bruno Micchiardi and Heidi Kopti, all bringing Petipa’s choreography to vivid life.

Mika’s sets for the white act Act II are dark and sparce, leaving plenty of room on the small Tallinn stage for the corps de ballet to highlight the beauty of Ivanov’s patterns. Casting has not been stinted and the famous small swans variation featured several principals. As Odette / Odile, Ekaterina Oleynik has fine technique and her partner, Denis Klimuk, replacing an injured dancer, makes a noble Siegfried and a strong partner. As this was their first time on-stage together in these roles, it’s understandable that their initial duets were muted. But by the time of the grand pas in the ball scene, their rapport was much clearer and became expressive of their love in the final scenes by the lake. The first traditional, beautiful white Act has fine ensemble dance from all the swans and has clearly been superbly prepared by the ballet staff. 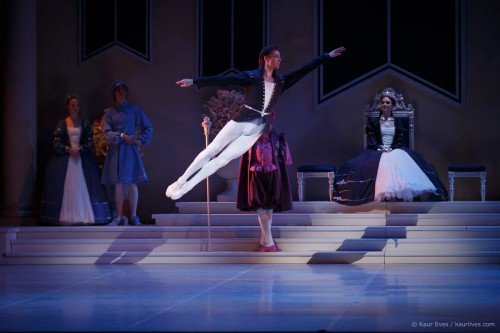 In the ball scene, Edur has also made changes: an attractive Russian dance with Nanae Maruyama on pointe performing with all her usual grace has been added to the traditional national dances. I also enjoyed Marta Navasardyan, Jonathan Hanks and Eneko Amorós as spirited Spanish dancers. Rothbart, played with gusto throughout by Ali Urata, and Odile enter just before the grands pas. So, the majority of the ball scene is lighter in mood without their malevolent presence, but given the impact of their earlier entry in most productions, I need to see this production again to make up my mind about this change. Oleynik and Klimuk are terrific in the grands pas, with Klimuk revelling in his jumps and Oleynik spinning like a top in her fouettés.

After Rothbart and Odile have triumphed in their deception and broken Siegfried’s promise, our hero returns to the lakeside and his sad reunion with Odette. Edur provides interesting patterns for the corps including a figure of eight with an arm rising in canon around one loop then the other. At the denouement, Rothbart’s hopes of victory are dashed, defeated by true love expressively portrayed by Oleynik and Klimuk.

The “happy ending” versions from the Soviet period have often been criticised for diminishing the tragic power of the work. However, I found Edur’s concept convincing as it has always seemed unfair to me that Rothbart’s deception should succeed. The dark lakeside scenes balance the brighter ones, so the narrative does not become saccharine. Nevertheless, the designs and the changes to the plot all signpost the finale. This is a distinctive production full of dance that is likely to please audiences for a long time.