I’m a firm believer in informative program notes. When confronted with an unfamiliar dance or choreographer, it’s often the only way to know what was on a choreographer’s mind before actually watching the piece, or to clarify intent afterward.

But sometimes, it’s better not to know.

The Sydney Dance Company returned to the Joyce Theater on Tuesday, the opening night of a week-long run. The company elected to perform three apparently signature pieces, all New York premieres: Wildebeest, Raw Models, and Frame of Mind, the last of which was choreographed by the company’s artistic director, Rafael Bonachela. While these contemporary dances all showed the company’s stellar group of dancers off to advantage, and although the choreography for each was quite different, on a macro level they each exhibited the same essential feverish style that wears its athleticism and physicality on its sleeve. I enjoyed each of the pieces in different ways and for different reasons, but doing so required ignoring, in one instance, a somewhat hackneyed subject and in the other two, program notes that suggested very specific intent where any such intent was overlooked in the dance’s actual creation or so deeply camouflaged as to make finding evidence of it an unnecessary struggle.

At the outset, I must emphasize that although the choreography left mixed impressions, there’s no such ambiguity about these SDC dancers. This is a superb company. I may single out a few during the course of this review, but that’s not intended to diminish the contribution of any of them. 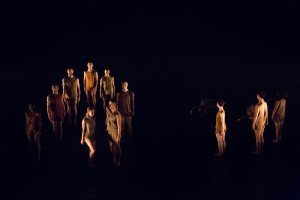 The most accessible of the three dances in terms of any sort of meaning beyond bodies moving in space is Wildebeest. But it’s also the least significant choreographically and the most cliché-ridden.

In her program notes, choreographer Gabrielle Nankivell, a former SDC dancer, references the connection of a wildebeest with the beast within the dancers (and implicitly within us all), as well as the evolution of the creature (seemingly a whimsical assemblage of parts from other animals’ bodies) from metaphorical birth to maturity. I expected “wild beasts learn to survive as they and the world evolve,” and to a large extent got it. The unnecessarily primitive-sounding, “dawn-of-the-world” electronic musical background (by Luke Smiles), which obviously was created in collaboration with the choreographer, comes and goes in emphasis, and increases and decreases in pace as the piece, and the beasts, and civilization as we know it, evolve.

The dance begins, cleverly if not surprisingly, with the “birth” of a wildebeest, complete with gangly legs that can’t quite connect yet to the ground. As skillfully executed by Bernhard Knauer, the animal comes to a sense of his physical self gradually, gaining confidence.  [Note that the program does not identify the dancers according to their roles or their entry/appearance positions in the dances, so with respect to many of the male dancers my identification is based on pre-performance photographs, and may require subsequent correction.]

Suddenly (and I suppose necessarily given the confines of a dance) the animal has matured, and is joined by others, including either other individuals who must be civilized (animalized?), predators from another wildebeest tribe, or mating possibilities (separating this group into males and females makes such a possibility impossible to ignore, although Nankivell ignores it in her comments). There’s a battle for survival, primacy or preservation, after which the wildebeest herd settles down and moves, generally in a regimented, herd-like fashion, with episodic emphasis on solos, pairs or sub-groups. 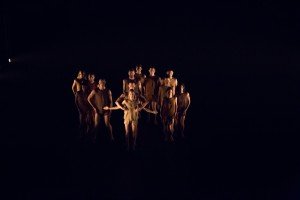 Nankivell’s movement quality here is that of your standard uncontrollable savage beast, with one major exception. Instead of all animal all the time, as a “herd” the dancers – led by Holly Doyle (one of the company’s most compelling dancers) and Knauer – conform, and limit their movement to rapid-fire intricate, synchronized, angular, and repetitive arm and hand movements (often accompanied by “ticking” sounds, like the ticking of some evolutionary clock) which are not so much annoying as curious – and I must acknowledge somewhat intriguing because they appear so incompatible with a herd of wild animals, even one “at rest” – although perhaps they’re reflective of a “herd-like mentality.”

Nankivell ends the piece with what seems like another birth of another wildebeest – a female this time. Or maybe it’s a different wildebeest’s death. Or the simplest explanation of all – that the process continues, which is the ultimate point of any such wild beast/wild human/wild planet exposition. Sometimes predictability is a virtue.

Raw Models is another matter.

It’s fine to create a dance based on musical inspiration alone, with no added agenda. But Raw Models clearly is intended to have one. The extraordinarily pretentious program notes are not worth replicating in detail here. Choreographer Jacopo Godani asserts, among other things, that “my ideal [in this piece] is to propose the prototype of a micro-social structure” free from the suffocation imposed “in a society that works on a pre-customized and branded method of fabricating mediocre models of life.” So he’s proposing an individualized alternative to societal-imposed conformity. Ok. That’d be fine. He’s entitled to whatever message he chooses. It’s not all right, however, if any transmission of the message is apparent only to him. 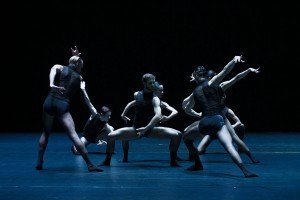 But, perhaps surprisingly, the piece works as an abstract and visually interesting non-narrative dance, effectively reflecting the commissioned score by 48nord (Ulrich Mueller and Siegfried Roessert) notwithstanding the effort it takes to find any evidence of Godani’s intended message.

Unlike the appearance of raw, unformed energy coupled with inexplicable rigidity in Wildebeest, in Raw Models the choreography is programmed-looking and specified. And, except for some of the duets, it’s regimented, but in an unregimented way. The movement quality is primarily undulating – the dancers, divided into groups, sway sideways left and right like individual bowls of gelatin. Strange as that looks, there’s a comfort knowing that there’s an attempt at choreographic coherence. After awhile, you get used to it. It’s concise and to the point – except that there’s no apparent point.

Since I haven’t seen any of his other pieces, it’s certainly possible that this “undulating” movement quality is a component of Godani’s choreographic style – but then it loses whatever specific purpose it might have in this piece. If I stretch perception considerably to attempt to account for what Godani says he’s trying to show, then perhaps what he’s doing is using the “undulating” movement as some sort of metaphor for the artificially restrained emotional and intellectual growth that society imposes, with the somewhat effeminate-looking movement quality (executed particularly clearly by Davide Di Giovanni) possibly equating with some sort of subjugation of natural primitive impulses. 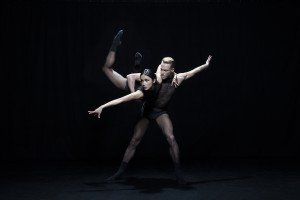 To me, that doesn’t work either, but at least it might explain the regimentation of the artificial-looking movement, and set up the exceptions (primarily duets) as visualized efforts to break free from it. One of those duets in particular, danced by Charmene Yap and Cass Mortimer Eipper, is super. While, again, I don’t like to single out one dancer when the entire group is so good, Yap nevertheless stood out in every piece in which she appeared (which was all of them). She’s an absorbing dancer with an engaging stage personality that becomes readily apparent when she exits the in-character stone-faced demeanor required in the pieces she dances.

The most successful of the three pieces is the final one. But here again, Bonacela’s intent, as stated in the program notes, doesn’t seem to fit. What does work is some unusually compelling choreography that is spiky and yet not totally angular, and more fine work from the company’s dancers (including but not limited to Jesse Scales, Chloe Leong, Duffy, and Yap), describing a series of obviously heartfelt but difficult to translate emotions – the one that comes to mind most frequently is some sense of loss, which binds it in some fifth-cousin-twice-removed way to Bonacela’s stated intent.

Each of the dancers (the full company) is clad in various variations of basic black, with two of the men standing out from the others by their ankle-length black slacks. The stage is dark, with rays of light emanating primarily upstage left (if there was a “window” – from which the “frame” in the dance’s title might have been derived –it was hidden from my view). The piece, to excerpts from various compositions by Bryce David Dressner of the rock band The National, begins with one of the men in slacks (Daniel Roberts) encountering a woman; ends (sort of) with the other man in slacks (Eipper) and another woman, both men appearing to have irretrievably lost something (or someone). The program notes reference the choreographer’s sense of loss in failing to be in two places at once, so perhaps these men are supposed to be surrogates who effectively are in two different places, but if that’s its purpose, the connection is so strained and opaque as to be ineffective.

Couplings come and go during the course of the piece, in the duets and trios into which the segments are divided, but they’re just background noise. The ones that are most important, and the ones that might be most meaningful, are the two involving the men-in-slacks and the women they encounter, which either don’t happen at all or are unsatisfying. But the choreography’s sense of dreary emptiness is delivered effectively.

These pieces all have an overriding style that permeates each dance. In that respect, this program is enviable. But each dance’s constant emphasis on athleticism and physicality doesn’t do these outstanding dancers justice. It’s apparent that they’re more than athletes. Next time the Sydney Dance Company returns, I’d like to see a more eclectic program, assaying dances that display the refined artistry, as well as the unrestrained physicality, of which their dancers are so obviously capable.