The Gibney (formerly Gibney Dance Center) space, which supplements its “regular” home at 890 Broadway, is an oasis. Like most buildings in the area, 280 Broadway is undergoing renovation and is currently surrounded by a cocoon of scaffolding. Finding the entrance is a chore, but once inside the performing / rehearsing area is welcoming and adequate. The Theater (apparently as yet unnamed) is a step above other black boxes, but it had to sacrifice wings for stage space, and the seating could have been raked better to provide all audience members with a full view of the stage without having to find space between the necks of people in the rows in front of them. Aside from that, it’s a fine little black box (actually grey) theater, more modern than many such spaces in New York.

To me, both pieces on the Tabula Rasa Dance Theater program were nearly overwhelmed by self-importance, self-indulgence and incoherence. But being filled with an abundance of creative ideas of cosmic significance and the inability, or unwillingness, to control artistic impulses, coupled with the conviction that audiences will “get” what seems obvious to a dance’s creator, is not at all unusual for a nascent choreographer (although imputing added significance by titling pieces in Latin may be). What is unusual, in a positive way, is Escalante’s distinctive movement quality. The intensity and hyper-activity is overbearing in both dances, and the visual symbolism repeated too frequently, but there’s some good stuff here, particularly in Ex Umbra in Solem.

Animla, vagula, blandula is a duet that provided my introduction to Escalante’s choreography. What I found was very much like what I saw in the subsequent dance: feverish, passionate movement that can’t be pigeonholed into one style or another. 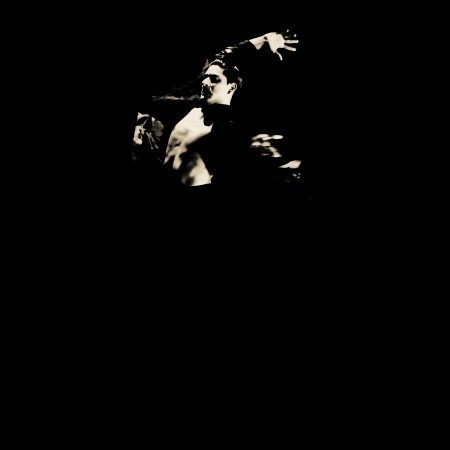 The dance’s title is taken from the first line of Roman Emperor Hadrian’s last poem, completed just before his death. The title does not mean “animal, vegetable, mineral” as I’d initially thought (my Latin is just a little unsophisticated). Rather, it’s a wistful poem that isn’t easily translatable, but the consensus seems to be that it’s Hadrian’s paean to his soon to be released wandering soul, and has nothing to do with animals (or vegetables, or minerals). Nevertheless, Escalante here focuses on the animalistic and on death, and gives the piece a foreboding, forbidding quality of discord that seems incompatible with translations of the poem that I’ve seen.

According to the program note, the dance embraces both the noble and the animalistic natures of the human body, with movement derived from observing birds, crocodiles, and primates. I got the bird part, and maybe what I saw as screams were simply the visualization of a predatory crocodile’s preparing for dinner, and the soon-to-be dinner’s awareness of its fate. Also according to the program note, the dance “explores the futility of communication, the physicality of emotion, the reality of death, and the self-destruction of civilization.” 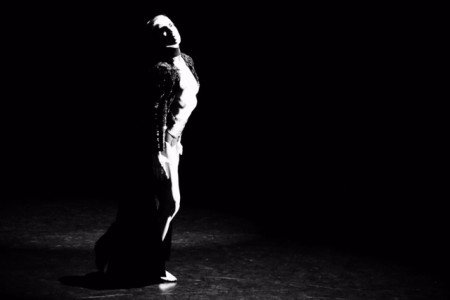 I saw a lot of communication by scream and physicality of emotion, but not much more. The movement quality was interesting and more fluid than I expected, but it amounted to a lot of very well-danced (by a vicious-looking Escalante and by his vibrant, perhaps “immortal soul” companion, Shannon Maynor) sound and fury.

It’s tempting to be similarly dismissive of Ex Umbra in Solem. A lot of it is just as self-indulgent and relatively incoherent. But the piece, which means “From the Shadow into the Light,” shouldn’t be judged so quickly. Escalante infuses Ex Umbra in Solem with some very interesting choreography, the dancers are both highly experienced and highly competent (one doesn’t necessarily follow the other), and the piece has moments of artistry that, in the end, overcame what to me was an initial lack of cohesiveness.

Escalante provides a lengthy program note to explain what Ex Umbra in Solem is about: religious divisiveness and intolerance as sources of violence, resulting in forced migration of vulnerable people; together with societal indifference to their plight, a consequence of the numbing and desensitizing impact of being force-fed a constant account of others’ suffering. Ultimately I saw much of that in Escalante’s piece, but lengthy parts of it were ineffective examples of what he was trying to demonstrate, and others were so disconnected from anything specific that they lost significance.

For example, the opening sequence of some religious figure / shaman (a commanding Jose Carlos Losada, a former dancer with the National Ballet of Cuba, where he was a principal, and with the Cincinnati Ballet) dominating his four obedient female supplicants came across more as a commentary on cult leadership than on any aspect of religious intolerance as a source of violence. Many of the individual subsidiary dances that were woven into the scene were quite effective in displaying the “victim’s” sense of helplessness and inability to escape, and, later in the dance, the recurring images of what may have been religious disciples replicating the ritualism that they’d been taught was clearly transmitted, but neither seemed to have any connection to the dance’s perceived purpose.

And the initial scenes of group dances didn’t, to me, correspond to anything relating to migration or suffering. Maybe they weren’t supposed to – maybe they were just setting the stage for what was to come, and the stage wasn’t set clearly enough.

But through it all, even before the dance started to click, there was something about Escalante’s choreography that not only maintained visual interest, but that was often compelling. Escalante’s work isn’t movement for movement’s sake, or, in the other direction, posing. What it is is fast-moving choreography, with a ferocity that’s startling. There was too much of it thrown at a viewer too quickly, but when a dancer isn’t thrusting or flailing limbs madly or exaggerating terror-filled open-mouthed facial expressions that seemed derived from that crocodile’s preparation for dinner, it’s also strangely lyrical and balletic. Many of the TRDT dancers have extensive ballet backgrounds, and it shows in their crystalline execution of Escalante’s feverish choreography. Ex Umbra in Solem isn’t just anger, and isn’t just violence, and isn’t just terror – there’s grace here amidst the human carnage, and a variety of expression and movement within what appears on the surface to be one-dimensional.

And when Escalante, an emigrant from Mexico with the demeanor of a stick of dynamite about to explode, finally begins to focus on what he says he’s trying to communicate and the many disparate scenes finally show a traceable meaning pattern, the dance becomes alive and real.

It’s unfortunate that the theater’s sight lines didn’t allow me to notice sooner, but apparently throughout the dance one company member was seated downstage left staring into a cell phone, being fed information via social media and maybe pushed news sources. Suddenly, that “viewer” began to get agitated, would occasionally rise up from the chair and look stunned, and then sit back down. Roughly concurrent with this, the “score” (an amalgam of music from a variety of sources) was modified to “broadcast” a momentary cacophony of snippets of television or radio reporting relating to attacks on civilians and refugee migration fused together such that it all became almost incomprehensible – which is the point. And roughly concurrent with that, most of the dancers changed costume and reemerged wearing stylish red dresses (I don’t recall the costumes for the men), each carrying his or her own cell phone, which was illuminated by frames of flashing lights as if to emphasize the egocentricity of it all. The dancers preened, texted, selfied (is that even a word?), and essentially ignored what they seemingly were being told about events in the world around them – including what I took to be an understated but hilarious pseudo-sophisticated take on “see no evil; hear no evil; speak no evil.” [Scenes moved and changed quickly in Ex Umbra in Solem, so if I’m relating scenes somewhat out of order, my apologies.]

This sort of thing has been done before, and with less of a heavy hand, but here the scene fit the dance and its purpose well – and it also contributed a measure of dark humor to a dance that needed a brief respite from intensity.

The next scene segued from cell phones to gas masks. Too obvious, but startling nonetheless. I didn’t know who these people were supposed to be, but the scene portrayed them, to me, as aggressors rather than victims (the costume and attitude displayed indicated they might have been knowledgeable and were protecting themselves from what they knew was coming).

This scene eventually led to the most focused, and moving, scene in the dance. With the sound of bombs landing nearby, the victims of an air assault cowered (again, not specified, but in my mind’s eye I saw Syrian civilians). One woman, costumed like a grade-school student, knelt motionless, as if dead or expecting to be. Another danced in agony. Notwithstanding its transparency, this scene was so well put together and executed that it made everything else that I found deficient in the dance evaporate.

Ex Umbra in Solem is very much an ensemble dance, but most of the dancers were given opportunities to be the center of focus in solos (actually or effectively) which, for me, were the highpoints of the dance because the execution at all times was first rate. The entire cast [Anica Bottom, Morgan Stinnett, Yuritzi Govea (who spent the dance in, or jumping out of, that chair), Maynor, Losada and Escalante] deserve significant performance praise, but to me Noriko Naraoka and Sevin Ceviker stood out. Most of these dances, including the solos, don’t require acting prowess: the choreography moves so quickly that there isn’t much room for character development. But Ceviker, who had a classical career in Turkey before emigrating to the U.S. and was a member of Martha Graham Company from 2006-2012, added a quality of animation beyond the execution of Escalante’s choreography that made her solos particularly biting. And Naraoka was a revelation. A scholarship student both at the San Francisco Ballet School and at New York City Ballet’s School of American Ballet, her ballet training is evident. But she provided the acting nuances that gave that scene of civilian devastation, and other solos that she danced, special meaning.

A final note about the costumes and production values. With emerging companies, costumes are often, and necessarily, an after-thought, and production values may be non-existent. Not so here. I don’t know how they were able to pull it off, but Escalante and Amy Fine Collins, the company’s Executive Producer and Creative Consultant, assembled an extraordinarily rich assortment of costumes (“painted garments” by Yelaine Rodriguez, as well as “additional costumes” by Geoffrey Beene, Adolfo, Christian Lacroix, and … Escalante) into which the dancers spent almost as much time getting into and out of as they did on stage, that added immeasurably to the qualitative impact of the piece. Even the lighting, uncredited, was impressive.

Ex Umbra in Solem has the potential to be a powerful dance – it just needs some polish and self-control. Based on what I saw at this performance, Tabula Rasa Dance Theater is worth keeping an eye on in the future.