It’s seven years since Pina Bausch died, but her work maintains a stellar reputation. The current visit of her company to London is sold out, as lovers of dance and drama plus German studies students converge to pay homage. Masurca Fago (Fiery Mazurka) was created in Lisbon as part of Expo 98 and the relaxed atmosphere sparked a light hearted work with the usual tropes of tanztheater, but with more dance than seen in some of her earlier darker works. 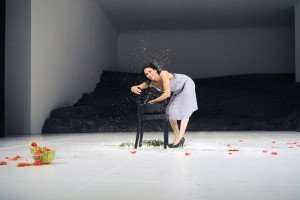 The stark set by Peter Pabst and Rolf Borzik features white surfaces with an irregular rocky area stretching across the stage – performers clamber around making exits and entrances. At regular intervals this dull space is brought to life by video projected at the back, but also falling on the other surfaces making splashes of moving colour. The structure of Masurca Fago is episodic with a few repeated sequences, which failed to help me join the scenes together. The theme is a general picture of Portugal, Brazil and Cape Verdi and perhaps that’s why the material seems unfocused, covering such a wide and disparate canvass. 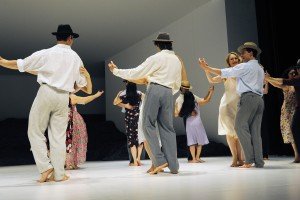 Nevertheless there is much to enjoy. Most of the artists have the chance to dance solos featuring dynamic movement with arms carving strong shapes in the air, accentuated by falls and spins. Bausch continues her exploration of relationships; as couples meet we see tenderness but also abuse. The artists speak to us about their lives and thoughts. There are fine jokes: a couple repeatedly clink and break glasses and munch apples alternately, exchanging false teeth under the table. A clear plastic envelope stretches across the stage to form a water slide with the dancers skidding across the stage at high speed, while the wonderful Regina Advento is pulled around in a foamy bath, producing plates from time to time dutifully dried by an attendant. As we often see with Bausch the artists splash and spit water at each other and many cigarettes are smoked, while the popular songs provide an attractive sound scape for the on-stage antics.

We returned from the interval to a video of an outdoor dance competition in Cape Verde, with an old couple moving slowly and lovingly, shadowed by company dancers around the theatre. And on two occasions a walrus waddles slowly across the stage. The final scenes feature a hastily constructed beach hut filled with happy dancers who then collapse to powerful images of waves and finally flowers opening and closing. So Masurca Fago is funny, often visually exciting, but left me thinking that the whole is less than the sum of the parts. 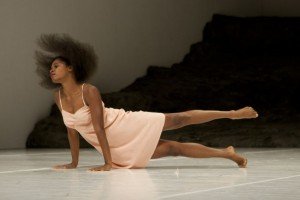 Some new performers have joined the company and their dancing was always of a high standard, but the jury is still out whether the company can find charismatic dancer/actors to replace members such as Cristiana Morganti, Julie Shanahan and Rainer Behr when the time comes. The company is moving on by commissioning new work to provide challenges and new perspectives for the performers and audiences, alongside the Bausch canon. Looking back on Masurca Fago, my view has not changed that while Tanztheater is often intriguing, the high points of Bausch’s repertoire remain the pure dance Rite of Spring, soon to be performed around the UK by English National Ballet, and the emotionally charged Cafe Müller – I wish there were more Bausch works like these.