The Grange is a country house, dating from the 16th C with later additions in the style of a Greek temple – a unique and intriguing building, despite sections in ruins. Saved from demolition in the 1970’s, it is now the home of an annual opera festival in a renovated section of the house. Founder and Artistic Director, Michael Chance is an internationally renowned countertenor. He has instilled a more relaxed atmosphere than festivals such as Glyndebourne that inform guests, “dress to impress”. However, The Grange does follow the pattern of an early start and a 90 minute dinner or picnic interval. In an idyllic country setting, the combination of high art and unhurried dining make for a memorable evening. 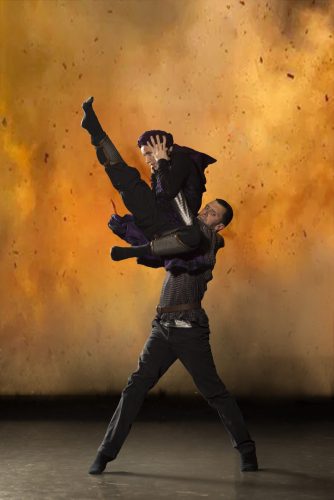 The Grange Festival regularly features imaginative dance evenings and this year saw the premiere of Shobana Jeyasingh’s Clorinda Agonistes – Clorinda the Warrior. Inspired by the glorious music of Monteverdi’s Il combattimento di Tancredi e Clorinda, Jeyasingh has adapted the original story in the first section, and in the second half creates a modern counterpart narrative. Accompanied on stage by the outstanding tenor, Ed Lyon, we see and hear the story of a Christian knight, Tancredi, who falls in love with a Saracen female warrior, Clorinda. After she takes part in a daring raid, the two meet in combat, not recognising each other. My eyes lit up when I read that the two roles were to be played by Jemima Brown and Jonathan Goddard, two of the most outstanding dancers around, and I was not disappointed.

The battle is a twenty minute duet with Lyon also joining the choreography from time to time and Jeyasingh does very well to keep our interest with forceful, innovative movement. From positions on opposite sides of the stage, Goddard thrusts forward with straight arms, while Brown features bent legs and arms in retaliation. Close combat is shown with powerful lifts, spins and floor work We and the fighters have moments to catch breath and in one section, Tancredi asks the name of his skilled adversary, but the reply is – know only that I am your enemy. Finally Clorinda suffers a mortal blow and her identity is revealed to Tancredi’s shocked dismay. 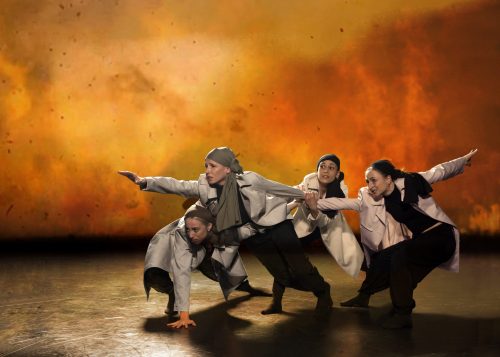 Shobana’s creation goes far beyond a historical narrative and in the second half she envisions a modern day Clorinda, metamorphosed into four women activists/fighters in an undefined conflict, perhaps in Syria, but sadly a situation prevalent in many places. On split screens we see devastated city landscapes, to a newly commissioned score by Syrian-American composer, Kareem Roustom. Not easy to follow Monteverdi, but Roustom’s tuneful and melancholy Middle-Eastern music succeeds with Lyon and the haunting recorded voice of Syrian mezzo-soprano, Dima Orsho, singing in Arabic. Again, Jeyasingh sets herself a difficult task with the four dancers on stage throughout. They often seem on the defensive, retreating from forces with superior firepower, but sometimes with linked hands, they never give up hope. Overall, the work’s combination of music, choreography and dancing of the highest order makes for an engrossing experience. 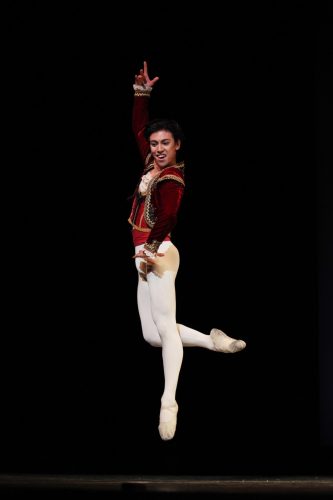 The first part of the Grange programme was more conventional than in previous years, perhaps to offset the political challenges of Clorinda. Initially, we saw a standard from Gala programmes the world over, the grands pas from Don Q. Luca Acri from the Royal Ballet was on top form and his joy at tackling the complex combinations shone out from the stage. His partner, Haruhi Otani from English National Ballet, showed impressive technique, delivering her fouettes with more grace than many. However, it is never easy to project a character from a grands pas lifted from its home, and Otani never fully relaxed into the role of a blissful bride. Nevertheless, the audience roared their approval at the end. 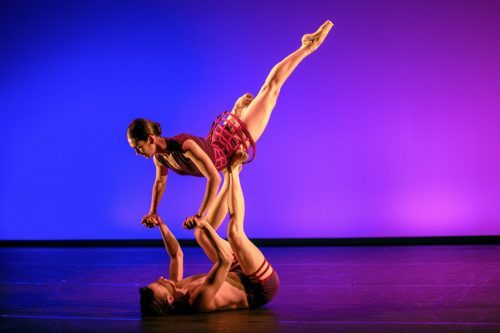 Over the past twelve years, New English Ballet Theatre has carved out a niche, visiting theatres where ballet is rarely seen and providing a platform for young dancers, making their way in the profession. They gave us Jenna Lee’s The Four Seasons, employing Max Richter’s re-composition of Vivaldi’s classic, with the familiar tunes giving way to Richter’s repetitions and additions. The thirteen NEBT dancers were joined by Acri and Sophie Allnatt also from the Royal Ballet. The dancers all get a chance to shine in Lee’s neoclassical ballet and I appreciated the warmth and commitment the company brought to the work. Unsurprisingly, the two Royal Ballet dancers shone out, making the most of Lee’s steps and lifts. Overall, however, the choreography of The Four Seasons lacked sufficient variety and distinctiveness to make it a memorable work.

The Grange Festival has a regular place in my calendar and next year’s season will feature a new evening length work by Mark Morris, The Look of Love, featuring the music of Burt Bacharach.