Since 1947 the Holland Festival has been shining the spotlight on innovative and exciting art in all its many guises. In venues from the alternative theatres on the Nes, to the Muziek Theater (the home of the National Opera & Ballet) and from the iconic Eye Film Museum to free opera in the park, the Festival saturates Amsterdam with art for a month or so in early summer. This year, working with associate artists William Kentridge and Faustin Linyekula, the Festival brought Africa to Amsterdam. Linyekula hails from Kinshasa in the Democratic Republic of the Congo and Kentridge from Johannesburg, South Africa. This is also the home of Gregory Maqoma whose performance was a highlight. 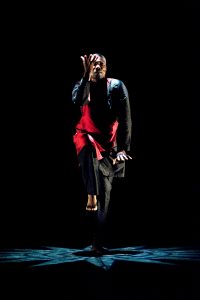 In Beautiful Me, a solo of riveting magnetism, Maqoma explores his identity in a world of diverse dance. He credits three other choreographers for their input: Vincent Mantsoe (a fellow artist at Vuyani Dance Theatre) Linyekula and British-Bangladeshi, Akram Khan. It is Khan’s Kathak influence that is most visible in the opening scenes where Maqoma finds harmony in the rhythms and footwork between their two heritage techniques. He adds the filigree of fluttering Asian hands, hands that move with the speed of a hummingbird to become a blur in the light.

Maqoma has a compelling persona. Even when rooted to the spot, as he is in the long opening section, his entire frame is alive to the moment. When he breaks into full flow, moving fluidly across the stage, the theatre comes alive with the electricity he generates. He proves his dance skills in a blend of contemporary dance with an African influence. It’s powerful and persuasive but this is not dance in isolation as through words and brief images he brings up political issues, weaving the past into the present and not without a touch of irony. However, in the after show discussion he noted: ‘Everything we do these days is politicised, I want to get back to humanity’. This he achieves in the warmth and sincerity of the presentation.

Maqoma, dressed in a brilliant red tabard over dark trousers, was a peacock in display when he raised his arms. He was accompanied by an ensemble of five musicians, blending West and African in strings and percussion matching the dance with verve and vigour. It was an hour that never seemed long and left much food for thought. 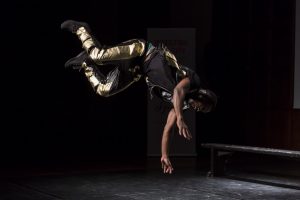 ‘Africa is shaped like a gun, and Congo is the trigger,’ is a quote attributed to Franz Fanon. Dans de la Rue 19, by Jeannot Kumbonyeki, reflected the political tensions in this volatile country. The inspiration came from the day he and his dancers watched yet another demonstration calling for President Kabila to step down. Many were killed and injured that day, but the dancers realised that nothing was going to change.

This inner turmoil is visible as Kumbonyeki stands silently, eyes downcast and very slowly his body starts to quiver building to a violent trembling. He is joined by two other men, Franck M’Zele Amisi and Josué Mawanika Shita. When the dance starts it’s violent, even self-destructive as the men break into ferocious street dance. Like bodies taking the bullets, they hurl themselves at the walls and floor. Huguette Tolinga, sitting on stage with her bank of percussion instruments, accompanies the drama bringing it to a close on the strike of a metallic gong and into a long dark pause. 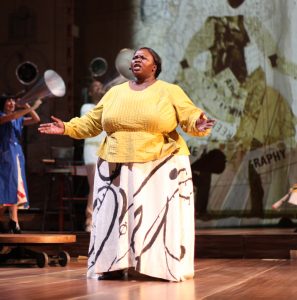 William Kentridge is a multimedia artist and Paper Music staged at the spectacular Muziek Gebouw, is a feast of variety and difference. The theatre piece was the culmination of a twenty-five year partnership between Kentridge and pianist Philip Miller who has written the music to accompany Kentridge’s video art. At this performance there were also two remarkable singers, Ann Masina and Joanna Dudley. Masina with an operatic voice of great warmth and beauty and Dudley with a repertoire that included whistling, song and a terrifyingly loud range of burglar alarms. It was an event where nothing was quite as it seems. Words and images follow in rapid succession, touching on great truths before cocking a snook and skipping off to play. Kentridge has the mind of a true polymath. In the film interludes, whether his Soho Eckstein series or his abstract drawings in ink that flow like choreography the onslaught of ideas leaves you breathless. It’s riveting stuff, that never quite joins up leaving a huge space for imagination. His philosophy is revealed in the name of his workspace: The Centre for the Less Good Idea. ‘Personally, he says, ‘I think misunderstandings and mistranslations are of vital importance for art. I am in praise of bastardy.’ And hallelujah to that. 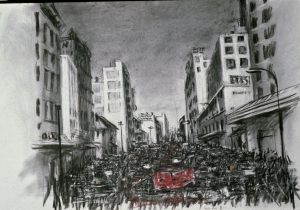 His art installation at the Eye Film Museum – a must visit when you are in Amsterdam – was a more sombre affair. Ten Drawings for Projection are short animation films each around 9 minutes long. His medium is charcoal, ideal for the harshness of the characters and the landscapes, and also for his parsimonious narrative and prolific irony. His character Soho Eckstein, a Johannesburg mining magnate is a devastating comment on colonisation and the social and psychological damage it inflicts on all involved.

The Holland Festival has highlighted important issues and done well to bring so many artists to Amsterdam, offering a platform both for the art and for talks with the artists. Each encounter left a great deal of afterthought and reflection.