I was looking forward to the National Ballet of Canada’s opening night program at the Kennedy Center featuring choreography by contemporary ballet choreographic powerhouses Willliam Forsythe, Jyří Kylían, and Alexei Ratmansky. When I left the theater, however, I felt less than fulfilled despite the impressive lineup of choreographers. My disappointment was primarily with the selected works, which didn’t show off the strengths of the company members. All of the pieces were demanding, and all seemed to deplete the dancers’ energy. The evening just didn’t take off for me.

The first piece on the program was Forsythe’s The Vertiginous Thrill of Exactitude, which Ballet Frankfurt premiered in 1996, and the National Ballet premiered in June 2019. It’s a handsome ballet to Franz Schubert’s Allegro Vivace from Symphony No. 9 in C Major, D944. Forsythe’s choreography definitely challenged the dancers. The movement was relentlessly fast. Two male dancers (Naoya Ebe and Harrison James) wearing bright purple shorts with what appeared to be a backless top, were soon joined by three female dancers (Hannah Galway, Chelsy Meiss, and Calley Skalnik), each wearing an olive colored flat tutu that looked like a flying saucer ringing the waist (costume design by Stephen Galloway). Ebe and James kept up with the rapidfire movement better than the women. There was so much packed into every second, it was hard to follow. Flexed hands, titled arms, feet that moved like nonstop pistons, and hips and shoulders that constantly changed direction. When the movement was delivered crisply, as I suspect it’s intended to be, it was exciting to watch, but more often, the dancers seemed overwhelmed, and what probably should have been provocative and precise came across more as chaotic and poorly timed. 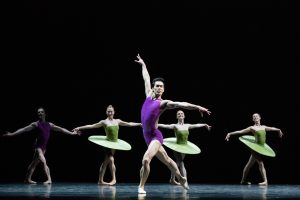 Naoya Ebe and
artists of the National Ballet of Canada in
The Vertiginous Thrill of Exactitude, photo by
Karolina Kuras

More Forsythe immediately followed, Approximate Sonata 2016 to pulsing music with crunches, whooshes, bangs, and fizzes by Thom Willems. Again, Ballet Frankfurt premiered this work in 1996, and the National Ballet premiered it in June 2019. Four couples performed intriguing pas de deux, with one couple (Sonia Rodriguez and Spencer Hack) dancing twice. The women wore black sleeveless leotards with no tights, and the men neon pink tank tops with vivid blue bottoms, and a pair of neon green pants was added at the end for one of the women (costumes by Galloway). I couldn’t guess what Forsythe’s set and lighting design signified. A blue box of light with the word “YES” would come and go, changing position and size against the backdrop, while a scrim further forward raised and lowered now and then. The dancers displayed tension through pushes, pulls, pokes, grabs, and intense stares. Holding hands, dancers stretched away from each other in a tug of war accompanied by exaggerated leg extensions. Is the work about intimacy and consent? Or is the meaning purposefully obscure? Whatever Approximate Sonata 2016 is about, it left me cold. 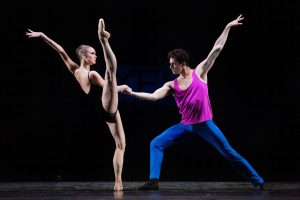 After intermission was Kylían’s Petite Mort set to music by Wolfgang Amadeus Mozart. I’ve seen Petite Mort too many times. It’s fun for the first few times, but like a joke that you’ve heard over and over again, it grows old. The National Ballet just picked up this 1991 work in November of 2019. What took them so long, I wonder? Petite Mort is clever and well structured, and audiences respond affectionately to its many surprises. But there’s no surprise left for me, and so my attention waned. I found all of the wide open legs and slicing fencing foils rather grating. 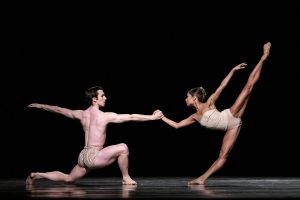 Stuck before the final piece on the program was a musical interlude, Leoš Janáček’s Idyll for String Orchestra-Adagio. The Kennedy Center Opera House Orchestra did a fine job playing it, but why the awkward interlude? It seems to have been thrown in for the sole purpose of allowing more time to prepare the set for Ratmansky’s Piano Concerto #1. At one point I heard some bizarre squeaks and thought one of the musicians was way off-key, but then I figured out it was noise from the set being lowered into place behind the curtain.

Piano Concerto #1 takes its name from the Dmitri Shostakovich score that accompanies it. This work is the final section of Ratmansky’s Shostakovich Trilogy, a tribute to the Russian composer.  George Tsypin’s set consists of several large red shapes (including stars, a hammer, and an airplane) that hang high above the stage and hover in Jennifer Tipton’s bluish gray lighting. Taking a cue from the set and lighting, Keso Dekker’s costumes also consist of red and stormy gray, including several unitards that are gray in the front and red in the back, which appear to emit a glow from behind. 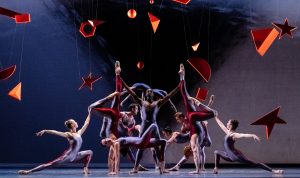 Artists of the National Ballet of Canada in Piano Concerto #1, photo by Karolina Kuras

The dancers ran hunched over, almost as if bowing, kicking gently, then skipped, skipped, skipped with arms swinging, and this pleasantly repeated. Complex lifts involved women tossing and spinning in the air. Female dancers were also gracefully towed, their legs elongated, en pointe, skating across the stage, and this also repeated. At the end, the figures hanging in the sky rose, conveying hope, but I’m not sure I agree with the program notes that this final section “stands on its own.” I felt like I was missing something (the rest of the trilogy!).

While it was not a particularly promising opening, and I had doubts about the company’s ability to pull off a successful story ballet as a result, the National Ballet of Canada utterly redeemed itself later in the week with its absolutely stellar production of The Sleeping Beauty.