With concern about my stamina, I entered the theater to watch the National Ballet of Canada perform The Sleeping Beauty. It’s a long ballet, and based on the evening of contemporary ballet I saw performed by the company earlier in the week, I worried that the dancing might drag. I needn’t have worried. The Sleeping Beauty was a triumph in every way. I had no trouble staying awake. To the contrary, I remained glued to the action on stage the entire time. 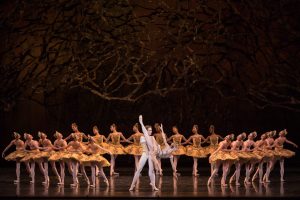 Heather Ogden and Harrison James
with artists of the National Ballet of Canada in The Sleeping Beauty, photo by
Teresa Wood

This was Rudolf Nureyev’s The Sleeping Beauty, a very special production, one that superlatives don’t begin to fairly describe. Nureyev produced, staged, and contributed additional choreography to Marius Petipa, and this version of The Sleeping Beauty premiered at the Teatro alla Scala Opera House in 1966. The National Ballet of Canada premiered it in 1972, nearly 50 years ago. What an incredible gem the company acquired! I have nothing negative to say about it. The fact that it is still being performed is a testament to its success, but its longevity alone can’t capture what’s so extraordinary about it. This Sleeping Beauty bursts with life and love and is lavish in every detail, perfectly befitting the fairy tale.

In the midst of the impeachment trial of President of the United States Donald J. Trump, the DC audience needed a little transporting, and the dancers, under Artistic Director Karen Kain (a former National Ballet star) certainly carried us away to another world. In that world, there are good fairies and bad fairies, and importantly, the good ones prevail. The superb costume and set design by Nicholas Giorgiadas flickered with gold accents and rich brocades. Like turning the pages in a sumptuously illustrated story book, each scene was dreamily colorful and breathtaking to behold. 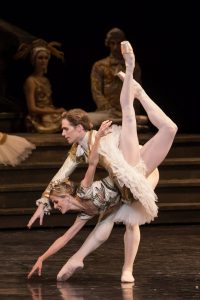 Heather Ogden and
Harrison James
in The Sleeping Beauty, photo by Teresa Wood

I fell in love with ballet all over again seeing the National Ballet’s fine cast in The Sleeping Beauty. Everyone who took to the stage deserves compliments because the dancing was nearly flawless. No one’s energy flagged, every expression was in tune with the moment. The dancers did more than convey a narrative, they uplifted souls. Their dancing was light and soft, even when executing moves most humans can’t do. Jumps looked as easy and as  natural as if a breeze came along and swept the dancers aloft.

Princess Aurora (Heather Odgen) sparkled and drew me in from the minute she sailed down the stairs at her birthday party. Prince Florimund (Harrison James) matched her in charm and attractiveness. I couldn’t choose whose dancing I preferred, settling instead for agreeing that each was perfectly suited to a royal role and together they made an ideal couple. I cheered for them both, though neither needed any extra encouragement when it came to dancing. Ogden danced ever so smoothly and warmly, and her balances were solid. James exuded longing and later happiness as he gracefully and powerfully leapt and spun. 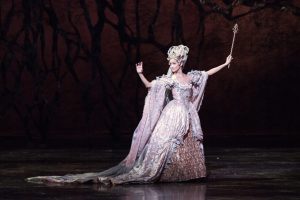 Tanya Howard
in The Sleeping Beauty, photo by Karolina Kuras

Tanya Howard at The Lilac Fairy truly floated. I marveled at how she skimmed along the surface of the stage, gliding as if on wheels. Her face reflected compassion, and her miming was clear, tender, and engaging. Rebekah Rimsay as Caraboose, the wicked fairy, was Howard’s opposite, but she was equally compelling. Like the best Disney villainess, Rimsay’s character was thrillingly evil. Her gestures were big and cleverly tinged with humor. As she glowered, one hated her and loved her at the same time.

Act III’s Bluebird, Naoya Ebe, amazed. He was more of a bird than I recall having seen before. He simply flew, defying gravitational laws. Whether soaring in the air or gently landing, he danced completely seamlessly. I’ve seen many excellent Bluebirds, but Ebe stunned me. It wasn’t the height he achieved, although that was great, it was the serenity with which he danced. As he elevated, he revealed no effort, only pure bliss. 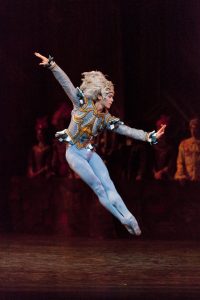 Naoya Ebe in The Sleeping Beauty., photo by Aleksandar Antonijevic
.

So divine was The Sleeping Beauty that I forgot the silliness of the story. This is a ballet that speaks to the best of what ballet can be — spellbinding. The National Ballet of Canada is a treasure, and The Sleeping Beauty is a grand prize in its chest. Thank you to the company for its riveting performance and for the memory of it that I will continue to cherish.