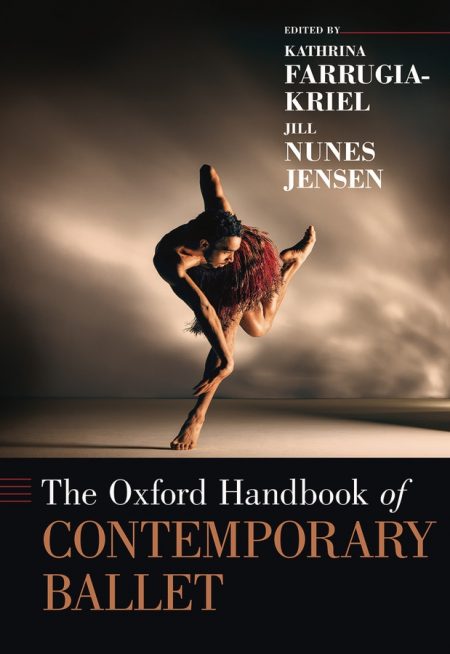 Have you accumulated a personal dance library over the years? If so, what’s in it? Dance-inspired novels, memoirs, biographies, coffee table books? And probably a fair amount of edited anthologies, texts and volumes dedicated to a single subject but from a variety of scholarly voices and perspectives. This month, a new publication from the famed Oxford Handbook series might take a place on the shelf – The Oxford Handbook of Contemporary Ballet, edited by Kathrina Farrugia-Kriel and Jill Nunes Jensen, published this year by Oxford University Press.

As it is a mammoth handbook of over nine hundred pages, I wasn’t planning to read the entire thing; instead, I planned to sample a number of the articles within, starting of course with the Introduction. Contributed by the two editors, the introduction provides important context on how such a huge subject (contemporary ballet) will be tackled in the pages that follow, as well as a lovely acknowledgment that this is not the only way to approach the topic. The discussion of how contemporary ballet distinguishes itself from classical ballet was particularly noteworthy and brought to mind similar conversations about modern dance and postmodern dance. And the readability must be praised. So often, academic books are unnecessarily wordy, and the point gets buried in the prose. Here the message was definitely well researched and analytical, but also clear and concise.

Delving into the book, Deborah Kate Norris’ Cathy Marston: Writing Ballets for Literary Dance(r)s caught my eye. Likely because prior to the premiere of Marston’s Snowblind for San Francisco Ballet’s 2018 Unbound Festival, I read the source material in preparation – the novel Ethan Fromme. Near the beginning of the article, Norris outlines a plan to focus on Marston’s literary/narrative journey while concurrently discussing gender disparity in ballet choreography. The chapter lives up to both these promises and more, including special attention to the role of the dramaturg and to the importance of dramaturgy in ballet.

Jennifer Fisher’s fascinating (and again, highly readable) Gender Progress and Interpretation in Ballet Duets was the next article I was drawn to. Ballet22, a new Bay Area company with a view towards upending gender norms in ballet, pointe work and pas de deux, has recently burst onto the scene. So, Fisher’s work, which addresses that very subject matter, felt of particular interest. Gia Kourlas’ Mark Morris: Clarity, a Dash of Magic, and No Phony Baloney points to the incomparable artistic talent of Mark Morris (transcending genre, form and style), while highlighting his choreographic contributions to ballet. Discussions of music and costume imbue the commentary, which also includes personal remembrances from the dance realm.

The last two articles I chose were situated right next to each other in the handbook, one being the last article in Part VI: The More Things Change…, and the other launching the book’s final section, Part VII: In Process. The former, Mindy Aloff’s Justin Peck: Everywhere We Go (2014), A Ballet Epic for Our Time brought another artistic powerhouse to the contemporary ballet dialog: Justin Peck, who currently holds the post of Resident Choreographer and Artistic Advisor at New York City Ballet. Aloff frames her study by focusing on Peck’s 2014 collaborative composition with Sufjan Stevens, Everywhere We Go, and closes the article with an essay penned by Peck himself. I’ve never had the opportunity to see Everywhere We Go, and after reading Aloff’s analysis, I hope I get the chance. Emily Coates’ Weaving Apollo: Women’s Authorship and Neoclassical Ballet was the final piece I read, a fascinating discourse on the entrenched gender realities of ballet, investigated through the lens of Apollo, the 1928 creation of George Balanchine.

If you end up reading the whole book, it will be an impressive feat. Because, as previously mentioned, it’s an enormous tome. And I really think that’s its one flaw, or barrier to accessibility. Even breaking the information into two separate volumes would make it more manageable. But in any event, The Oxford Handbook of Contemporary Ballet is going to be a terrific reference addition to any dance library.