As bad as it’s been, particularly for those in the performing arts, the COVID-19 pandemic has brought with it a plethora of high-quality streaming videos that allow viewers to see performances that they otherwise might never have seen, as well as premieres of contemporary choreographic creations (along with a seemingly never-ending supply of barre / exercise / fitness classes). By my entirely unscientific observation, however, most of these efforts have been creatively consistent with what these artists have always done – and of course there’s nothing at all wrong with that. Creativity in any form needs to be nurtured, even during pandemics.

But I’ve recently been alerted to a virtual series created by Preeti Vasudevan, an Indian-born and New York-based dancer / choreographer whose work I’ve previously reviewed (The Veiled Moon, 2015; Stories by Hand, 2017), which takes her creativity in a slightly different direction. It’s a web-based series of Indian stories and fables for children told through Indian dance gestures and expressions called “The Red Curtain Project” (www.theredcurtainproject.org). As conceived and presented, however, The Red Curtain Project is far more than that. The project’s genius lies in the intellectual curiosity and opportunity that the site provides to enable all viewers – children, as well as parents, educators, and … critics – to explore Indian culture, and particularly Indian dance, beyond the stories themselves. As is often the case, what goes on behind the curtain may be as significant, if not more, that what’s presented in front of it. 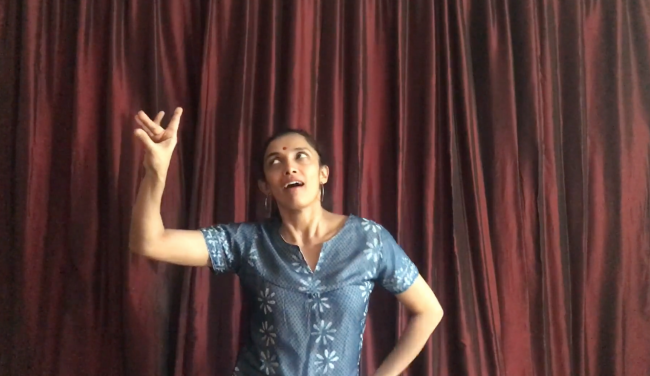 The Red Curtain is a project of Thresh (as in “threshold”), which Vasudevan, its Artistic Director, previously created as a sort of umbrella for her and her dancers’ performances. She describes Thresh not so much as a company, but as a project-based collective among international artists; a multicultural collaboration. The notion of artists in various genres collaborating on a performing arts project is nothing new: indeed, such collaborative endeavors seem the norm rather than the exception. But here’s it’s as much cross-cultural pollination as getting together to create an artistic product. For example, the artists who collaborate with Vasudevan for one of the Red Curtain stories are Alaina Buffalo Spirit (illustration), who is identified as being from the So’taa’ee band of the Northern Cheyenne Nation, and cellist Yo-Yo Ma (music), whose culture footprint arguably encompasses everything but Indian. So even though the dances are performed solo, they’re ensemble pieces.

The Red Curtain Project succeeds on multiple levels. At its most basic, the ten stories presented are entertainingly told and intelligently communicate each story’s essential message. On another level, they represent a preservation of Indian fables and the art of Indian dance – in other words, a slice of Indian culture – for an online international audience that may have limited awareness of it (or lost contact with it). Third, the stories are embedded in a multi-part interactive website that encourages and rewards intellectual exploration and provides essential background information. And last – but far from least – the series inevitably places these Indian stories in a universal context. My first thought upon hearing about them was that these stories were Indian versions of Aesop’s Fables – but upon further review found that Aesop may not have existed (or, if he did, he may have been African, not Greek), and that many (if not all) the stories attributed to him were part of the panoramic cultural stew that originated in other cultures, including Indian. If anything, Aesop’s Fables were largely Hellenistic (or, later, Westernized) versions of African and Asian fables. 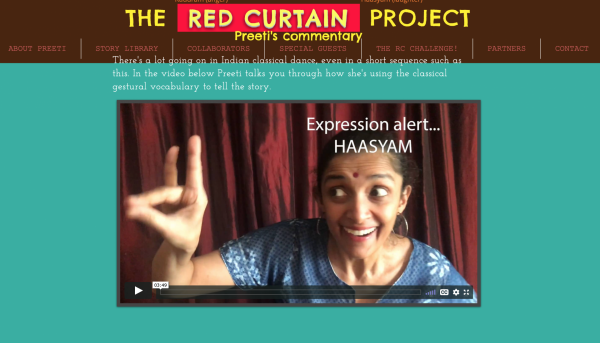 The stories themselves can be appreciated on their own, but they also function as portals through which Vasudevan opens up Indian dance (or at least a part of it) via bite-sized “translations” of gestures and expressions used in each story. Some of the stories also include a recapitulation of the story with accompanying commentary from Vasudevan explaining what she’s doing in real time. Consequently, the young viewer (and adult hangers-on) may not only learn the story, but also on an introductory level, the building blocks (and vocabulary) of Indian dance. Scroll down the particular story’s page further and one finds a “quiz,” as well as an opportunity for the young viewer to create his or her own story incorporating the gestures and expressions learned – and to submit them for viewing on the site. It’s all deliciously insidious.

While the number of stories The Red Curtain Project presents may expand further, at this point the stories, many of which are derived from India’s multi-faceted religious traditions (Buddhist, Hindu, and Muslim), are divided into three groups of three stories each: Clever Animals, The Wisdom of Children, and Sacred Rivers (one representing Northern India, once Central India, and one Southern India) – plus an additional story under the heading “Special Collaborations.” Each grouping has its own illustrator and composer. Generally, the stories (none lasts longer than 10 minutes) are introduced by that story’s basic illustration and are performed by Vasudevan in front of a bare curtain (red, of course) to accompanying music. To me, the stories seem to grow in complexity from the initial story, “The Clever Antelope,” through to “The Story of Kaveri” (the third Sacred River story), and may not have been easily understandable were it not for Vasudevan’s narrative, which explains what’s happening. That is, the stories are told verbally, but they’re illuminated by Vasudevan’s animated Indian dance hand gestures (“mudras”) and facial expressions (“bheda”) that make the story live. And it is Vasudevan’s gestures and expressions that prompt the intellectual curiosity that the site nurtures. [Vasudevan grew up learning Indian classical dance (“Bharatanatyam”) in South India, where gestures are classified in minute detail.] 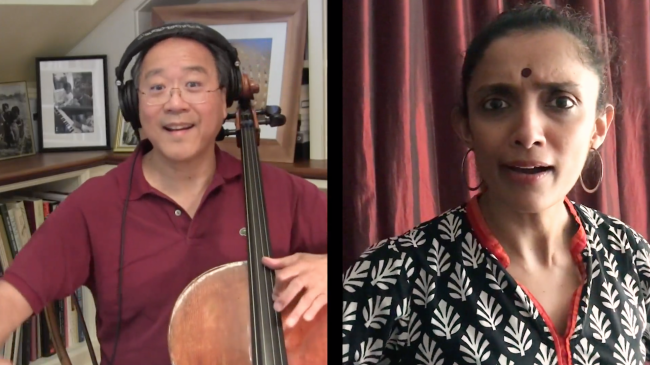 The educational value of the site doesn’t stop there. Information about Vasudevan’s collaborators – some familiar, some not – is accessible via redundant tabs (so the opportunity to expand one’s knowledge base is available and highlighted at various points of site exploration) which, when opened, provide access to the collaborator’s background and the essence of his or her contribution to the story presented. Some also include visual examples of the collaborative artist’s process with respect to the story with which he or she was involved [e.g., click on “Draw with Biz” (illustrator Biswajit Balasubramanian); “Make Music with Jerry” (composer Jerome Korman)]. Clicking on these tabs opens up not only a visual description of what the collaborator did, but a video that shows the collaborator’s work process. [And don’t miss the site’s home page, which includes a video of Vasudevan and brief excerpts from the two public performances I previously saw (click on “Showreel”). It’s still magical.]

The most well-known of Vasudevan’s collaborators, and one with whom Vasudevan has previously collaborated, is Yo-Yo Ma, who himself organized a cultural collaboration called Silkroad. He provided the score, and the aural accompaniment, for the seventh in The Red Curtain stories: “Imbo and Eli” (The Elephant and the Mouse). Via the site’s “Special Guests” tab, the viewer is provided with a series of what are called “the Zoom discussions” between the two of them that provide invaluable artistic insight, and that take the viewer beyond the nuts and bolts of the specific collaboration here. 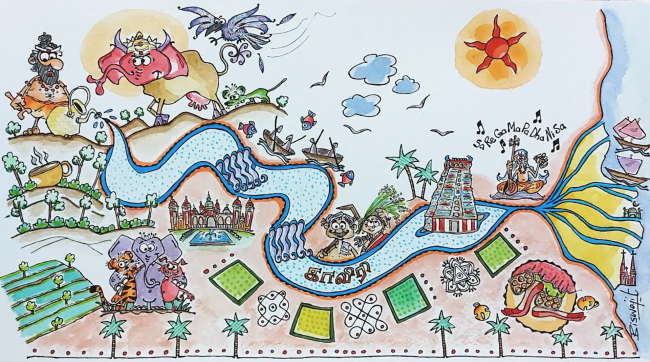 Highlighting certain of the collaborations over others is unfair, since the accompanying music and illustrations are bound by the scope of the stories. With that understanding, my favorites among the stories are “The Golden Mango” and “Munna and the Maharaja” (from “The Wisdom of Children” series), the three “Sacred River” stories and the “Special Collaboration,” not just because the stories seem meatier, but because of the collaborative music and illustrations, which in a sense mirror the stories’ increased complexity. For example, Tom Lynch’s illustration for “The Golden Mango” presents a visually entertaining cornucopia of characters from the story. Similarly, the illustrations for the Sacred River stories created by Balasubramanian present an event-based map of the subject river, which awakened images in my mind of ancient Indian paintings I’d viewed in museums or books, albeit at a more limited level of detail. And Yo-Yo Ma’s music for “Imbo and Eli” enhances rather than mirrors the narrative. [If I could modify what The Red Curtain Project already presents, it would be to include more illustrations – but frankly, given the nature of the presentations, I don’t know how that could be accomplished.]

All this being said, the glue that holds The Red Curtain stories together is Vasudevan, who performs and educates with the ever-present infectious enthusiasm needed to propel viewers beyond the stories themselves to explore the “adjunct” information that really is the heart of The Red Curtain – while making her presentation of the stories sufficient for any viewer who cares to stop there.

The Red Curtain Project does not represent all that Vasudevan has created during the pandemic. Recently she premiered a piece commissioned for The Guggenheim Museum Works & Process series, and just this past weekend an excerpt from her choreography for an opera created for the Glimmerglass Festival Youth Chorus inspired by Kipling’s The Jungle Book (composed by Kamala Sankaram with a libretto by Kelley Rourke), called “Bagheera’s Aria,” premiered on both YouTube and the Glimmerglass web site ( https://glimmerglass.org/events/glimpse-the-jungle-book/ ). And my understanding is that Vasudevan is also preparing an intriguing-sounding future project that will take Indian dance, theater, and storytelling in a more contemporary direction. She’s clearly the pied piper of Indian dance.