In this time of self isolation and closed theatres, dance enjoyment can still be obtained online. Here is the second part of some links from the Royal Opera House and one from Sadler’s Wells. I’ll put up more in the next few weeks. 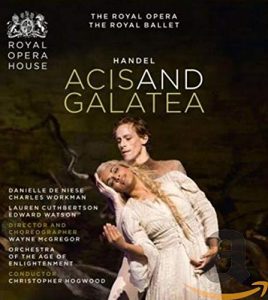 As part of Our House to Your House, on Friday 3rd April 2020 at 7pm UK time, the ROH will broadcast on youtube Wayne McGregor’s production of Acis and Galatea by Handel and it will remain on the ROH channel. This is one I missed first time round, so I am keen to catch up. Here is what Judith Mackrell wrote at the time:

In Acis, Lauren Cuthbertson and Edward Watson make a strong case for doubling dancers and singers – these were irresistibly pastoral lovers, playful and languorous without any whimsy. The duet shadowing Damon’s lament at the death of Acis also added an eloquent physical register, and it was only in the muted choreography for Polyphemus that McGregor’s dramatic range fell short.

The ROH runs a series of Insight Evenings with different formats, lasting around 90 minutes. The most interesting are those focusing on rehearsals of new works or ones coming back into the rep. and they are available on YouTube. The usual format consists of a conversation with the choreographer and dancers and the rehearsal of two scenes from the ballet.

This Insight event is part of Kenneth MacMillan: a National Celebration, a festival which brought together leading British dance companies to celebrate MacMillan’s legacy, on the 25th anniversary of his death.

Two contrasted pas de deux from Concerto and The Judas Tree combined with an introduction to MacMillan’s work by his biographer, Jann Parry and a discussion with some of the artists most closely associated with the choreographer including Monica Mason, Darcey Bussell, Alessandra Ferri and Leanne Benjamin.

As well as sections featuring the cast being coached through sections of Christopher Wheeldon’s hit ballet (not my favourite) the livestream offers a closer look at the many props and puppets that bring Wonderland to life. The event is presented by Royal Ballet Principal Alexander Campbell, who is clearly a natural in this role.

Note that this video starts with several minutes of the Max Richter Quartet.

One of McGregor’s most successful works for the Royal Ballet. We also see a prominent role for one of the RB’s Benesh notators. From the RB:

Join dancers of The Royal Ballet, Wayne McGregor and the Max Richter Quartet for a glimpse into rehearsals for Infra. In Wayne McGregor’s masterpiece of abstract ballet, 12 dancers portray the emotions beneath the surface of human interaction – the title Infra comes from the Latin word for ‘below’. This collaboration with artist Julian Opie was created for The Royal Ballet in 2008, and has been performed around the world to critical acclaim. Infra explores the feelings we keep hidden from those around us; a crowd surges past one woman who remains still, her private grief gut-wrenchingly evident for the audience, but unnoticed by the crowd. This ground-breaking work remains one of McGregor’s finest, and one of contemporary ballet’s most emotionally resonant pieces.

Christopher Saunders coaches one of Ashton’s most popular works with a panoply of roles: humourous, romantic and fine central roles for character dancers as Elgar and his wife. From the RB:

Ashton’s Enigma Variations is quintessentially British in every way – from its score by Elgar and period designs by Julia Trevelyan Oman, to Ashton’s signature style, the essence of British ballet.

The Royal Ballet in New York: Infra, The Age of Anxiety and divertissements

The Royal Ballet in New York: The Dream, Song of the Earth

Marianela Núñez: a Cinderella with heart