The Royal Ballet School have a fail-safe item on their Summer Performance, one that ensures the curtain will come down on a packed audience with a collective lump in its throat. That item is the Grand Défilé, devised by Gailene Stock in 2001 that continues to work its magic year after year. The other star of the show was John Neumeier’s Yondering, one of the sweetest, most heart-warming ballets on the planet. In addition to these treats, the Summer Performance showed a ballet school able to train dancers to a professional level with the promise of a good job on graduation. 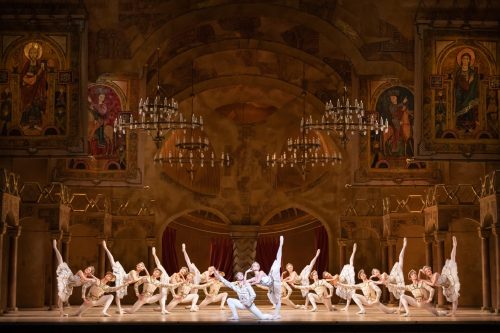 Act lll of Raymonda, using sets and costumes from the Royal Ballet’s production, made the grandest of openings. The School was able to cast the eight couples and principals in Pas Hongrois and also in the challenging Grand Pas with dancers well up to the task. Madison Penney, in the eponymous role, led the cast with authority, haughty èpaulement and strong technique although a little more warmth wouldn’t come amiss. Takumi Miyake as Jean de Brienne stole the show with jet propelled elevation, brilliant turns and an easy charm.

The male quartet is one of the show-pieces, and a terrifying prospect as individual double tours come under the spotlight. However, all were successfully accomplished as well as some very crisp entrechats. The female Pas de Trois, so intricately structured, showed a coordinated team of strong dancers. The four female variations were well performed showing style and the necessary contrasts and I particularly liked Chaeyeon Kang for her sensitive musical phrasing and Scarlett Harvey for her spirited jumps.

Neumeier only allows Yondering to be performed by students. When you see it performed as it was by the Upper School students with their youthful freshness and simplicity, you can understand why. Neumeier finds the perfect honest movement for adolescents experiencing first love, for the gutsy male crew in ‘That’s What’s the Matter’ ending with caps thrown in the air and the physical comedy of puppy love in ‘Molly! Do you love me?’ A non-committal Molly, Tilly Wightman,and lanky George Edwards, got every lift, fall and catch, as well as the comedy timing and a delicious rapport, while tenor Thomas Hampson had just the right timbre and tone. It was a joy to watch.

Mikaela Polley’s Jubilation, for White Lodge students from years 7 – 11, took impeccable classroom steps to the stage in cleverly staged choreography that ensured each eager young dancer had the opportunity to make parents proud. Frederick Ashton’s Swan Lake pas de douze, displayed the considerable talent in the First Year. Well placed feet and clean classical lines were in evidence as were partnering skills that have always been a strong point of the school. 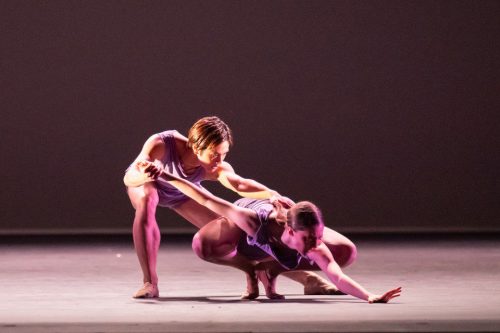 Wayne McGregor’s PreSentient is a complex work to Steve Reich’s equally complex music and students in the pre-professional year did it proud. McGregor’s choreography needs, and got, technically secure dancers able to shift nonchalantly into the cut and thrust of his movement vocabulary. The duets were particularly impressive, with partners coordinating the challenging holds and lifts with professional flair.

Moments, from Joseph Toonga, was a powerful piece for a large group of 2nd years students. The loose structure shifted and reshaped organically in response to the group dynamics. The light streamed from above to add drama, lighting the bodies in fascinating ways. The dancers showed wholehearted commitment to the movement, generated in the core and involving the entire body with the occasionally excitement of extreme athletic moves. 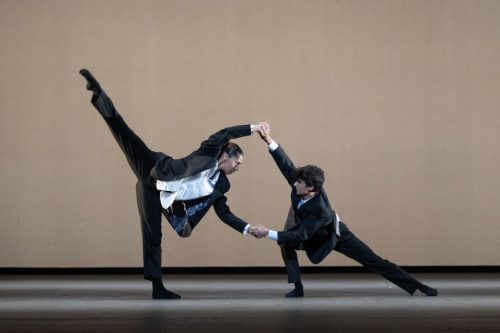 The only student choreography, Eccentric Pulses from Guillem Cabrera Espinach, was created for the Ursula Moreton Emerging Choreographer 2022, and danced by 2nd year students, Caspar Lench and Alexandra Manuel. It was a low key, intense duet, one man, one woman, both dressed in black suits, in a relationship ending in death. The movement quality was modern, with strong sculpted lines, the partnering uncompromising and delivered with a sense of purpose.

The Grand Défilé to Carl Czerny Etudes brought the entire school onto the stage in brilliantly managed sections to suit each level and letting the graduating students experience lift-off. Takumi Miyake executed a step that doesn’t yet even have a name, it looked like a double tour on a horizontal plane and no doubt we’ll be seeing more of it. It was a thrilling moment at the end of a thrilling show.