The Russell Maliphant Company has enriched our dance experience for nearly 25 years. Over those years they have visited an extraordinary variety of venues even in London from the bijou Place Theatre to the enormous Coliseum via Sadlers Wells and others. But for the past few years, the Company’s spiritual home has become the deliciously eccentric Coronet Theatre. A semi-ruined small cinema that has bags of atmosphere and provides a perfect setting for small scale work.

Maliphantworks3 is, surprise, surprise, the third visit to the venue and this was a special occasion focussing on Maliphant and his long term partner on and off stage, Dana Fouras, as she prepares to move on professionally to other projects. 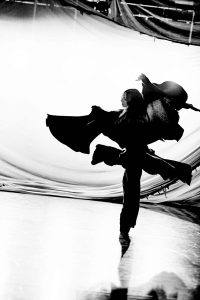 The Space Between is a new 30-minute duet, exemplifying Maliphant’s signature style of combining beautiful movement with dramatic lighting, but also featuring exceptional video projection by Panagiotis Tomaras. In dim light, we see a dappled water effect on the floor and walls and also on two indistinct objects, which are revealed as the dancers in reflective costumes. Initially constrained to the floor, they rise and move slowly and elegantly with arms outstretched and bodies twisting separately. After a period, Maliphant recedes into the shadows leaving Fouras with a different floor pattern as she expands her movement around the stage weaving supple shapes. When Maliphant replaces her the movement oscillates between the floor and upright at a faster pace. Finally they are together with their bodies entwined. The movement vocabulary certainly has echoes of Maliphant’s earlier work, combining smooth movement with capoeira, but the arresting visuals from Tomaras takes it into a new dimension. 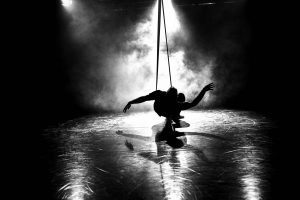 Two short films feature solos. Film One sees Fouras spinning in slow motion in a dark dress with billowing folds. The costume creates a myriad of patterns in space, developing Loie Fuller’s ideas from a century before – a delicious morsel. Film Two has Maliphant in a rubber sling and able to perform gravity defying manoeuvres as he circles around a central position. However, I found the novelty wore thin after a couple of minutes and I prefer to see the dancers working with gravity unassisted . 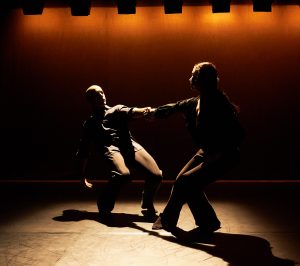 Duet, (Photo to the right by Tom Bowles) premiered at The Coronet in maliphantworks2, provided a fine finale: a loving conversation between Maliphant and Fouras to a simple mandolin tune and then Caruso singing Donizetti. The couple move slowly at first in characteristic Maliphant steps in dim light at the side of the stage. When they move to the centre, Michael Hulls, the lighting designer, creates shadows on the ruined walls and columns of The Coronet, and the couple link arms with weight and swing over each other’s backs in a crescendo of vibrant movement. Maliphant and Fouras fully deserved the generous applause at the end and I hope we see maliphantworks4 at The Coronet before long with many more to follow.

Sylvie Guillem: A Life in Progress

English National Ballet: Lest We Forget