Chelsea Clinton delivered a moving introduction to the matinee performance of The Washington Ballet’s Balanchine + Ashton program. Clinton is a former student of  The Washington School of Ballet (TWSB), and she honored the school during its 75th anniversary by lauding the many things she gained from her ballet training, including an appreciation of the arts, time management skills, close friends, and the ability to love something she admits she wasn’t the best at. As a former dance student myself (although not at TWSB), I can attest to having learned all that and more from my dance training. Thus, it’s no surprise to me that Clinton continues to love ballet and  credits it for some of the qualities that have propelled her to success in her career. And her posture remains excellent!

The mixed bill performance kicked off with a performance by current TWSB students, choreographed by The Washington Ballet’s Artistic Director Julie Kent. This also occurred at the last performance of The Washington Ballet I attended. In the Défilé, students from beginner to advanced, paraded around and showcased some of what they’ve learned. Ballet stars aren’t born, of course, they’re made, and it takes hard work. Some of the students may one day be professionals, but most, like Clinton and myself, will go on to do other things. Presumably, however, wherever they go and whatever they do, they will carry with them the many wonderful gifts studying dance brings. 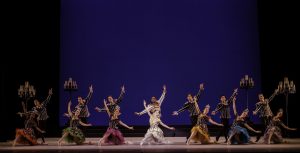 The first work on the program by Sir Frederick Ashton was Birthday Offering, which he choreographed in 1956 in honor of the Royal Ballet’s 25th anniversary. This performance of Birthday Offering by The Washington Ballet, a company premiere this season, seemed especially appropriate given the 75th anniversary celebration of TWBS. Yet the performance I saw didn’t induce joyous feelings. The dancers struggled somewhat and the pacing appeared rushed. The costumes (stripes, pearls, ribbons, tulle, feathers, jewels, and more) were awfully busy. The dancing in Birthday Offering echoed that busyness. There were so many competing elements, it  felt like an explosion of multi-colored streamers and confetti. The result was messiness and visual clutter.

The lead couple, Ayano Kimura and Andile Ndlovu, didn’t generate any excitement. Their dancing, while technically fine, mostly left emotion aside, although they did give off a rather cold but regal air. I enjoyed bright spots in some of the variations for six female dancers. Ashton’s choreography highlights coquettishness and charm, and also often speed. I particularly liked the second variation danced by Ashley Murphy-Wilson and the fifth variation danced by Adelaide Clauss. Both Murphy-Wilson and Clauss effectively captured Ashton’s playfulness and whimsy.

Following the first intermission, Katherine Barkman and guest artist Marcelo Gomes danced Ashton’s Méditation from Thaïs. From beginning to end I was enchanted. Gomes and Barkman paired perfectly together. Although he’s a consummate veteran, and she, a relative newcomer, I discerned no difference in ability between them. To the contrary, they melted together as one and absolutely convincingly conveyed their love. Gomes and Barkman oozed expression through every inch of their bodies. As they stretched, even their fingertips unfurled simultaneously, and when they embraced, sparks flew. Barkman balanced atop Gomes’s back like a mermaid and snaked around like the filmy scarf she used to sometimes cover her face. When Gomes traced the outline of her body, desire plainly erupted. The exquisite artistry made my heart ache, in a good way, and a number of audience members immediately leapt to their feet when Barkman and Gomes left the stage. I’ll not soon forget that extraordinary performance. 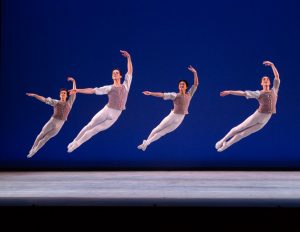 Next came Balanchine’s Allegro Brillante. Balachine’s clean and complex choreography stood out — oh those stunning lines and patterns and symmetries! The dancers did an adequate job with it, but I longed for more oomph. Eun Won Lee, the lead female in pale pink, danced beautifully. She moved wispily, yet with restraint. Lee’s dancing and demeanor have a gentleness that’s undeniably appealing, but she can come across as timid. I’m confident she’s got more fervor than she displayed. Interestingly, the male dancers in Allegro Brillante tended to keep my gaze. Young dancers Masanori Takiguchi (recently promoted from the Studio Company) and Nicholas Cowden (from the Studio Company), in particular, seem to hold much promise, and the more experienced Corey Landolt (lead), plus Stephen Nakagawa and Oscar Sanchez, also danced strongly.

The biggest surprise wasn’t seeing Chelsea Clinton or witnessing the breathtaking duet by Barkman and Gomes (they’re so fabulous, I expect greatness from them), it was the final work on the program, Balanchine’s comedic Broadway ballet, Slaughter on Tenth Avenue. I’ve seen it before, and I wasn’t enthusiastic about it. I thought of it as merely “cute.” Something magical happened in the hands of The Washington Ballet, whose cast members elevated it from mildly entertaining to wildly entertaining. Barkman is so dazzling, I worry that The Washington Ballet won’t be able to keep her on board. But the good news is there are other dazzling young female dancers in the company. Exhibit A is Brittany Stone. 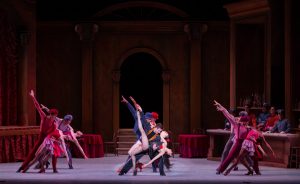 The Washington Ballet in George Balanchine’s Slaughter on Tenth Avenue, photo by xmbphotography

Stone transformed Slaughter on Tenth Avenue into a seductive, even poignant farce. Slyly, sleekly, she extended her legs, sheathed in smoky dark tights with seams up the back, high into the sky, tempting in her role as Striptease Girl. She rattled the fringe on her skirt with aplomb. When it came to dying, she shined, too. Gracefully arching her back while carried, limply swaying, tilting lifelessly into her lover’s arms, Stone did it all with remarkable proficiency and humor.

As Striptease Girl’s paramour, the Hoofer, Alex Kramer grew on me. He attacked the tap sequences, bounding across the stage. Gian Carlo Perez brought smiles as the Big Boss. The three policemen — Rench Soriano, Lope Lim, and Alexandros Pappajohn — danced with impeccable vigor and timing, and they were riotously funny to boot. As Morrosine, Tamás Krizsa almost stole the show. In his short pink bathrobe, with his Russian accent, his prancing and murderous plotting had the audience laughing hysterically. And TWSB trainee Harry Warshaw delighted as the Gangster, a comic killer for hire.

I have to give credit to all involved. Slaughter on Tenth Avenue would not have been such fun without the valuable contributions of every performer. I know Kent favors traditional classical works, but I hope she’ll continue to give her dancers a chance to explore some lighter ballets that allow them to show off their acting chops as well as their dancing. Slaughter on Tenth Avenue proved to be an excellent fit for the company, and this lively, silly piece definitely pleased the audience.