The season opener of The Washington Ballet (TWB) was surprisingly strong. Artistic Director Julie Kent, who joined TWB in July 2016, may be finding her footing. The dancers looked assured and well-rehearsed, and the program, although it consisted of a truly odd assortment of pieces, was a huge success. Kent, in her speech before the matinee started, explained that the program was designed to show off the depth and diversity of the company, and it did just that. As well, Kent dedicated the performance to the memory of Arthur Mitchell, an African-American ballet legend (former principal dancer with New York City Ballet and one of the founders of Dance Theatre of Harlem), who recently passed away. Notably, TWB’s present company members include dancers of various races, ethnicities, and nationalities. While I value seeing dancers of different backgrounds, I don’t think it’s significant in this review to signal the shade of a dancer’s skin.

Preceding TWB’s matinee was a week of heightened emotion in Washington, DC, as Dr. Christine Blasey Ford and Brett Kavanaugh testified before the Senate Judiciary Committee regarding Kavanaugh’s nomination as a Supreme Court justice. The calming notes of Frederic Chopin’s music and the beautiful choreography of Michel Fokine coated my weariness. I was able to set aside the fact that Les Sylphides, a quintessential romantic ballet, features one male surrounded by women who move around him as if he’s the sun. I set aside, too, the distinctly fragile and flirtatious poses of the women. I forgave this classic ballet for all of that and more and simply let myself be entertained by its loveliness. And it was lovely indeed.

In this fantasy ballet, women in long white tulle skirts with rings of pale pink roses around their heads sport tiny fairy wings on their backs. They’re mythical spirits. Often their feet are drawn together, elevated, their legs snugly together, so they drift like a breeze as their feet gently tiptoe beneath them. Arms extend in curved frames around their faces or to the side just above their hips. They lean forward slightly, and very consciously, while standing. They wear peculiar expressions of bliss. Small groupings intersect in perfect symmetry. It’s as pretty as it is perfectly controlled.

In this sea of delicate dancers sharing a pensive mood and soft gestures, Tamako Miyazaki stood out. It was as if she didn’t get the memo to look sedated and dreamy. Instead, Miyazaki looked infused with joy, and she danced that way, too — light and effervescent in comparison to the rest of the more sober cast members. Although Les Sylphides has slow pacing, and that’s part of its loveliness — watching the motion unfold leisurely, almost lethargically, Miyazaki added some zest to the graceful choreography. Ayano Kimura and Ashley Murphy-Wilson displayed, appropriately, a more placid, cool demeanor. Their performances were good, too, albeit less animated. And Gian Carlo Perez’s stoicism was apt. 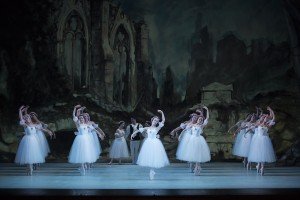 Following intermission were three gala-type duets. George Balanchine’s fiery, fast-paced Tarantella is the opposite of the serene Les Sylphides. It was fun to watch the dancing go from 0-60 mph. Nicole Graniero and Andile Ndlovu attacked the choreography (and the tambourines) with vigor. Ndlovu, in particular, is a delight to watch. He achieves incredible height in his jumps, but it’s his warm personality that comes through the most. Ndlovu is a showman, and increasingly a star. Graniero was a good partner for him. She was crisp and precise, powerful and engaging.

Next was the first pas de deux from Alexei Ratmansky’s Seven Sonatas. Glenn Sales, a veteran guest pianist with many dance companies, now in this third season as music supervisor for TWB, played Domenico Scarlatti’s music brilliantly. Ratmansky’s choreography is superb, but the pair dancing exceeded it. Internationally renowned dancers Stella Abrera, American Ballet Theatre (ABT)  principal dancer, and Marcelo Gomes, former ABT principal dancer, gave a passionate performance of the sort ballet lovers dream about. Seeing them together in this work was like watching a master class in artistry. These experienced dancers are at the apex of their careers, and they were utterly exquisite to behold. Volumes of genuine emotion poured forth in each moment. Abrera and Gomes moved organically. Whether crouching, embracing, turning away, or holding hands, they danced with one heart, and it’s precisely that kind of connection one longs to see on stage.

I had not seen guest artist Katherine Barkman, guest principal dancer with Ballet Manila, dance before, and I worried that she wouldn’t fare well against such a stunning performance by Abrera and Gomes. But Barkman held her own. She displayed an intoxicating youthful exuberance that demanded attention. Her dynamism, confidence, and dramatic knowing glances at the audience would tempt anyone to guess she’s Russian. She’s not Russian, but American, yet her Russian Vaganova training is obvious. Her pas de deux from Swan Lake Act III with TWB’s Rolando Sarabia was remarkably solid. Barkman skillfully captured the black swan’s tantalizing allure and exhibited a level of maturity you would expect to see in much more seasoned professionals (Barkman, the 2014 gold medal winner of the Youth America Grand Prix in Philadelphia, is in her early 20s). Apparently, she will join TWB as a company member in its upcoming performances). 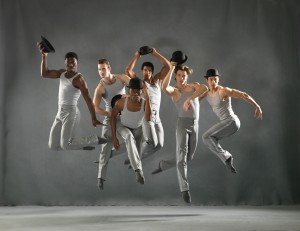 Closing TWB’s eclectic season opener was Annabelle Lopez Ochoa’s Sombrerisimo. This lively contemporary ballet for six men stood in stark contrast to the old and ultra feminine Les Sylphides that began the evening. Javier Morera, Alexandros Papajohn, Alex Kramer, Oscar Sanchez, Stephen Nakagawa, and Daniel Roberge were the epitome of suave. Sombrerisimo is more playful than serious, but it smartly shifts in tone. The black hats that play an important role in the choreography are a clever device, but thankfully they don’t dominate the work. It’s definitely the dancing rather than the props that charm the audience in this crowd pleaser.

Latin influence is evident in the music as well as in the swagger and swooshing hips of the dancers. In a group there are lifts of various heights, but the portion of the body sticking into the air is upright legs rather than merely upper bodies. Lopez Ochoa’s choreography embraces repetition. Now and then the dancers pop up in straight vertical jumps like kernels of exploding popcorn. Sombrerisimo effectively highlighted the talent of some of TWB’s younger male dancers, and it’s a stylish work that will grow with them.

From classical ballets to beguiling duets to robust contemporary works, TWB seems poised to have a promising season, but I’d prefer to see fewer guest artists, as amazing as they are, and more opportunities for TWB’s own dancers, especially the younger ones, to tackle more challenging roles.