The terms “experimental theater” and “cutting edge” can mean different things to different people. Sometimes the words can presage something truly unique in performance art; sometimes it’s less unique than an expansion of technique, of style, or of the intersection of art and technology. In The Box 2, which had its premiere engagement at La MaMa ETC (Experimental Theater Club) this past weekend, attempts to expands the parameters of technology (video and lighting) and art (dance and music), resulting in a dramatically new, if not completely unique, presentation. The dancing component was provided, primarily, by Miki Orihara; the music by Senri Oe, and the visual effects by the director, Hiroyuki Nishiyama (aka “nissy”).

The performance had all the earmarks of something unusual. A four flight walk-up to a tiny proscenium theater (seating for 50-60), with the stage opening covered by a translucent “fabric” stretching from the base of the stage diagonally over the front half of the seating area to the ceiling, and a broadcasted recording that mixed non-specific noise with recognizable sounds (e.g., a ringing telephone; a siren; a disembodied voice). Roughly 98% of the audience appeared to be Japanese. And there was free beer. 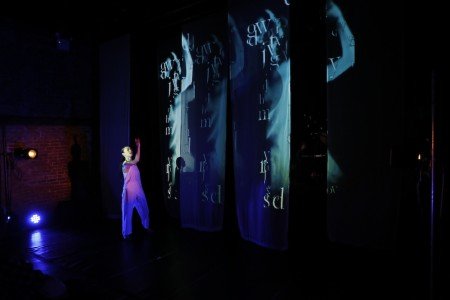 Miki Orihara in “In The Box 2”
Photo by Yoji Kawada

In the first instance, I must emphasize that whenever Orihara is on stage and the scene’s sole focal point, the performance becomes irresistible to watch. A former principal with the Martha Graham Dance Company, Orihara, who is also credited with the piece’s choreography, is a stage personality concurrently magnetic and intriguing, impossible to ignore no matter what she’s doing regardless of the combination of video “costumes” projected onto her. And Oe’s music, played by him on a piano placed upstage center, which formed both a sort of background for the piece and at times became a focal point of its own, is not at all “experimental” – at least to my ear. Although at times it was punctuated by the musical equivalent of body slams a bit too frequently, overall this was music that is accessible and interesting and both complements and enhances the visual presentation.

In an overly simplistic summary, In The Box 2 consists of two interrelated components: the “theme” – each of us lives in a box that intersects in various ways with other people’s boxes; and the expression of the forces that may impact (or reflect) our boxes. The latter component – a video and light show of sorts (appropriate for a 4th of July weekend) projected in different ways on the boxes’ borders (represented by fabric “curtains”) and on Orihara’s body – is primarily where the invention is, and provides the visual effects that apparently are the piece’s raison d’etre. 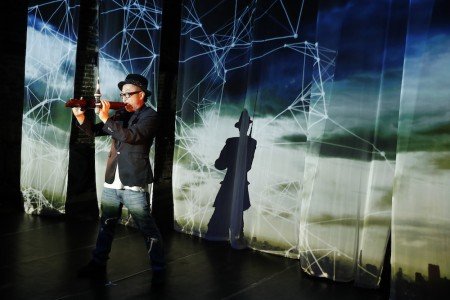 Senri Oe in “In The Box 2”
Photo by Yoji Kawada

Following an introductory video projection of box shapes – with tops that open, presumably to introduce the fact that the audience is going to get a peek inside the boxes – onto the aforementioned overhanging fabric, the visual focus changes to an image of Orihara behind the curtain, herself enwrapped in billowy chiffon-like fabric – like a romantic tutu that seemed to both insulate and float around her entire body. She slowly moves her body within the chiffon confines, and eventually frees her limbs and body from it. To me it’s apparent that the scene is intended to reflect an emergence, as if from a cocoon-like restriction; being born. It’s a beautiful set of images, less like cracking though an eggshell as are some similar presentations of the same idea, and more like an unfolding mystery. Unfortunately, although parts of In The Box 2 are compelling, nothing that follows quite equals the simple purity of these images.

As Orihara emerges from her cocoon, the lights darken, she disappears into the wings, and the fabric scrim-like curtain drops to reveal Oe upstage center at the piano. [I utilize the words “curtain” and “fabric” throughout, although I don’t know whether “curtain” is the appropriate word for the partitions that divide the stage and onto which lighting is projected, or whether these partitions are made of a “fabric”.] Orihara has either passed into her life’s “box,” within which Oe plays, or the piece segues into Oe’s own box – reflecting the piece’s subtitle: “You and Me.” 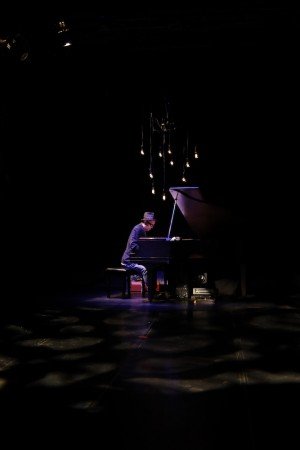 Senri Oe in “In The Box 2”
Photo by Yoji Kawada

Eventually, Orihara returns to the stage, walking purposefully in a box-like pattern around the stage perimeter. Soon thereafter, she’s joined by one, then another, then another dancer, who also walk in square patterns, at times together with each other, at times individually, but not together with Orihara.

At this point, the piece loses some of its intended impact because the other dancers become a temporary and superfluous distraction (by their presence, not by anything they did or didn’t do properly). At first, I saw the three dancers (Emory Campbell, Michele Lee, and Lloyd Knight – all absorbing presences who aren’t given much to do) as representative of others who live in their own boxes and whose lives in some way intersect with Orihara’s. But when the others’ boxes got increasingly smaller, becoming lines, and then when they were further reduced to posing statue-like looking outward to…something, with Orihara gazing at each of them looking at…something (presumably the other person’s box), the piece, thematically, became more strange than interesting.

Other than the opening images, by far the most noteworthy artistic development in In The Box 2 is the use of projections (video, lighting) against the curtains which appear, get moved, and get removed quite dramatically during the course of the presentation, or against Orihara’s stationary or moving body, or that take flight as her “shadow” expands and is multiplied, creating new images as it goes, or that seem to mimic visually the pulse of Oe’s music. But the sensation of seeing what appear to be lighting-created projected shadows (it could be a skillfully pre-produced video that appears to mimic and/or multiply images which will later be duplicated live on stage) multiply and take on lives of their own (or that are sequential repetitions of the live dancer’s movement) is not unusual. Nor is projecting images against the “screen” of a dancer’s body, either limited to the body or including the body in a broader video projection, something unique. Aside from seeing similar technological wizardry used by an assortment of dance companies and “special” performances by individual dancers, I’ve seen the technology utilized periodically by contestants on America’s Got Talent.  And of course there’s nothing new about creating a visual representation of music (I don’t know how it’s done; I just know I’ve seen it). 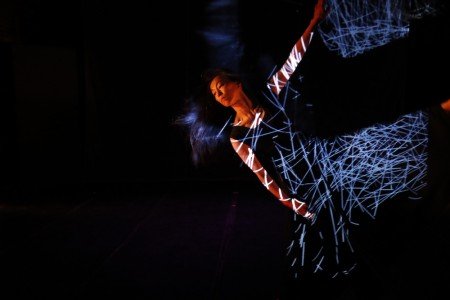 Miki Orihara in “In The Box 2”
Photo by Yoji Kawada

However, based on a brief reference in the program notes, I suspect what’s being done here, at least with respect to Orihara, is intended to be something a bit different – some sort of lighting (or video) response to her actual movement accomplished by a system of “sensors” in real time. This may well be something new, or at least a significant expansion of theatrical video/lighting capability. I don’t know one way or the other. The problem, however, is that it doesn’t look different from multi-colored / multi-patterned video or lighting that is projected onto a wall/scrim/curtain or a body, still or in motion. The presentation wasn’t finely-tuned enough to know whether the variable colored lighting was a pre-prepared video (or computer-enabled lighting progression) projected onto a curtain or Orihara’s body (which then moves creating varying visual images), or something that was triggered as a direct and immediate response to her movement. And without that knowledge, it just looks like a variation of what’s already out there, perhaps taken to a higher level.

But perhaps as one can tell by the discussion above, by this point the technology, whatever its nature and genesis, overwhelms the “theme” of the piece, to the point where I was paying more attention to the visual images than to what the images were there for. That’s unfortunate, but not an unusual consequence of the utilization of cutting edge technology in experimental theater. But as representative of thinking “out of the box” as In The Box 2 may have been, and as visually entertaining as it frequently was, I would like to have seen more of Orihara dance, and less of the sound and light show.