The following article was written by CriticalDance Boston-based reviewer Carla DeFord and was published in the December 16, 2016 issue of YourArlington.com. It is reproduced here with the permission of YourArlington, and can be accessed at     http://www.yourarlington.com/arlington-archives/residents/people/features/10039-nutcracker-121616.html

Interviews with Three Arlington, MA Residents
Who Performed in Boston Ballet’s The Nutcracker

What brings people to the Boston Ballet production of The Nutcracker? Lavish sets and costumes, festive theme, professional dancers and inventive choreography, to be sure. Further attractions are the many children onstage — 224 of them divided into three casts — and, of course, the beloved Tchaikovsky score.

Among town residents participating in this traditional holiday spectacle are Jordan Lally, a fourth grader at St. Agnes School; Talya Borisy, a seventh grader at Belmont Day School; and Boston Ballet Orchestra member Iva Milch, who is now in her 26th year of performing in The Nutcracker. Recently, YourArlington caught up with all three of them in separate interviews.

Lally is 9 years old and plays a lamb in the Pastorale scene of Act II. This is her second year in The Nutcracker; in 2015, she played a baby mouse in the battle scene. “It’s fun being a lamb. I get to sit down, run around in a circle, pose at the end and go offstage,” she said. 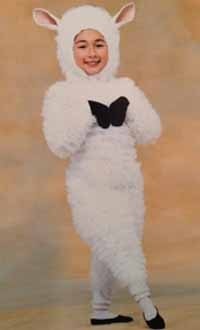 To make the lambs look more lifelike, each has a little black nose. Lally said that when she and the other lambs arrive at the theater for a performance, “We get our noses painted. After we leave the stage, we take off our costumes, and they [the Boston Ballet staff] give us wipes to clean our noses.” Having divested themselves of their costumes and makeup, the children can leave the theater; they don’t have to wait until the end of the entire performance. “I get home around 10 p.m., and that’s not too late on weekends.”

She has attended Boston Ballet School for four years, the last two of them at the Newton studio. She wants to continue studying ballet and said that The Nutcracker parts she’d like to play are the Sugar Plum Fairy (the adult star of the show), a party girl (one of the young guests at the Christmas party in Act I) and Clara (the junior star).

Twelve-year-old Borisy has been taking ballet lessons at the Boston Ballet School studio in Newton since she was 3. She recalls being excited when she was cast as a party girl in Act I, because “it’s a role I’ve been wanting for a while.” Last year, she played a polichinelle, one of the little French clowns who come out from under Mother Ginger’s skirt.

As Borisy explained, “the party takes place in the 1800s, so you’re not doing what you’d do at a party today. We have to be ladylike, not slouch, and make sure to stay in character.” Clara’s rambunctious brother, Fritz, and his friends — all Boston Ballet School students — are also at the party in addition to the children’s onstage parents and Clara’s magician godfather, Herr Drosselmeier. 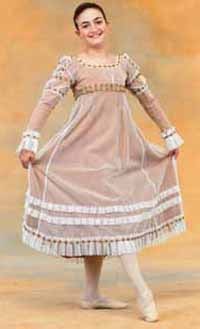 The part Borisy plays is complicated, involving a lot of stage business as well as dancing. Here’s how she described it: “We’re supposed to pay attention when Harlequin, the ballerina doll and the dancing bear [all company members] are onstage. Then Drosselmeier brings out the nutcracker doll, and we walk away, looking as if we’re disappointed. Next, we get involved in a tug-of-war over the nutcracker until it breaks in two, and we all fall down. When the lullaby starts, we cradle our dolls to show how much we love them.” At that point the boys come riding in on their hobbyhorses in an effort to scare the girls.

“What’s great about this role,” she noted, “is that you get to come up with your own things to do onstage. When the boys ride in, some of the girls guard their dolls, some whack the boys away, some look as if they’re yelling at the boys to stop. You can use the story to express yourself.”

Borisy also loves having the opportunity to interact with professional dancers: “You get to see how committed and dedicated they are. The party parents [company members] learn your name, and you get to work with them.” For an aspiring young dancer, that’s a thrilling experience.

Milch grew up in Teaneck, N.J., where she took piano as a child and started flute lessons through the public-school system. “I found out I had a bit of talent in music, and it ended up being what I did professionally,” she said.

A fellow at Tanglewood for several years, she went on to earn a B.A. and M.A. at the New England Conservatory. Soon after that, she joined the Boston Ballet Orchestra as piccolo and second flute player. “I was in the right place at the right time,” she said; “people were retiring just as I was coming in.

“All the orchestra members have played The Nutcracker a million times,” said Milch. In fact, Boston Ballet is doing 43 performances of the production this year, and Milch will play in every one of them. The repetition can be trying, but Milch said that no matter how many times you’ve performed it, there are still parts of the score that pose a challenge. “Before the start of the Chinese dance, I always get a little nervous,” she admitted.

“There’s not a show that goes by that I don’t understand how lucky I am to have this job. I work with wonderful people who are really nice and extremely talented. It’s so gratifying when the orchestra is given a bow, and we hear the applause. I keep practicing so that I’m in as good shape as I can be for each performance.”

Because the orchestra is in the pit, below the stage, Milch does not see any of the performances and doesn’t have much contact with the children onstage. She actually interacts more with children in the audience, which she really enjoys.

“Seeing the kids come down to the pit before the show or during intermission is a huge perk. Every now and then,” she said. “They’ll wave, and I’ll wave back. Often, these kids are so jazzed up by the performance; they’re loving it.

“Live music is the heart and soul of the ballet. I recognize that smaller companies can’t afford an orchestra, and I’m not criticizing them for using taped music, but when you have a variety of casts with dancers who each have their own interpretation of a role and a conductor who understands the dancers and can make every performance unique and special, that’s what the art form is about. To be part of that, for me, makes it all worthwhile.

“It’s important for the audience to understand that when they come to the Boston Ballet Nutcracker, they are hearing professional musicians who have had years of training in a very competitive field. Performances of this caliber are not accessible to everyone in the country.”

Not only are the dancing, music and production values top-notch, Milch said; “the Boston Opera House itself is so beautiful,” especially when it’s decked out for Christmas. As she put it, “This Nutcracker is a celebration.” 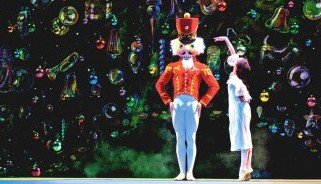 DeFord’s CriticalDance review of Boston Ballet’s The Nutcracker is available at http://criticaldance.org/boston-ballet-nutcracker/