[Additional performance photos will be added upon receipt.]

Where possible, I try to find something to like in any dance performance I see, if for no other reason than that being in some way positive at least recognizes the undeniable effort that went into choreographing / or and executing the dance(s). Sometimes writing something positive is a struggle. With the program I saw last night, it doesn’t take any effort at all. 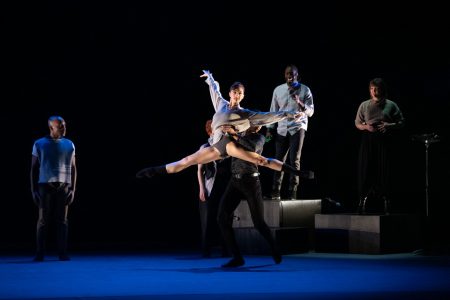 If you’re flying somewhere between, say, Seattle and Los Angeles, it’s worth a detour to New York to see the production directed and curated by New York City Ballet Principal Tiler Peck that premiered last night at City Center – if you can still get a ticket for any of the remaining performances. One piece in particular simply must be seen, and I suspect will be reconstituted elsewhere as soon as contracts can be signed. 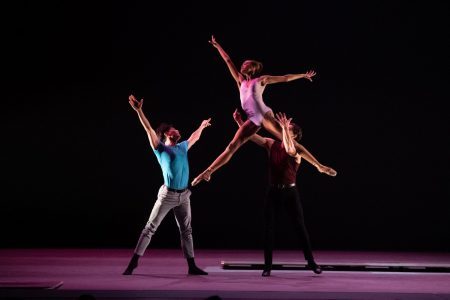 Time Spell, the program’s third piece and its world premiere performance, is breathtaking, and easily one of the finest pieces of work that I’ve seen this year – or any year. Its combination of choreography by Michelle Dorrance, Jillian Meyers (a Los Angeles-based dancer and choreographer), and Peck, and music by multi-talented composers and musicians Aaron Marcellus and Penelope Wendlandt, is a mashup of ballet, tap, contemporary dance, and music, each visualized independently, but each also evolving and coming together. There are no segments that are less than exceptional, but as a whole, Time Spell is far more than the sum of its parts. It’s a work of genius, in its execution, stagecraft, and music. And I suspect there’s more to it, especially with respect to the sequencing and progression of its segments, than I could glean on first view. It’s relatively lengthy, but time flies by as Time Spell evolves and weaves its spell. It’s an epic piece of work. The only mystery is why it wasn’t the final dance on the program. 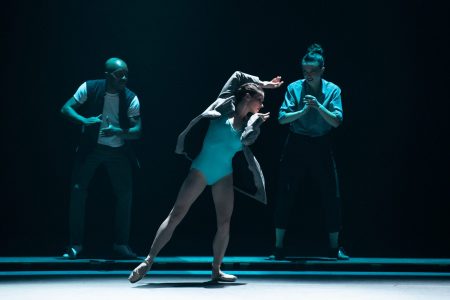 It’s difficult to explain how Time Spell works as well as it does. I suspect a lot of it – maybe most of it – has to do with Dorrance’s contribution. She’s not just an excellent tap dancer – there are many of those. I’ve written before that one of the differences between Dorrance (the founder and Artistic Director of Dorrance Dance) and other tap exponents is in the originality, imagination, and craft that she brings to her dances, beyond the quality of her execution itself. The tap component, and I suspect much of the concept for Time Spell, have Dorrance’s mark all over it. 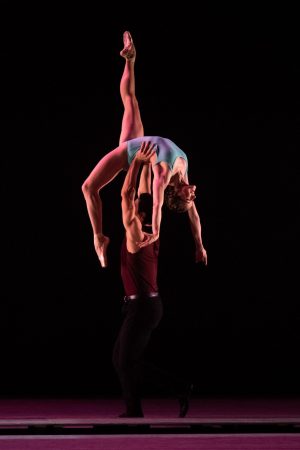 The dance’s music deserves to be highlighted as well. It’s a combination of sounds, words, melody, and hand-claps that gently reflects and powers the dance forward. The score consists of multiple compositions, but they’re entwined seamlessly, as are the corresponding segments of the dance.  And, with rare exception, it’s “soft’ music that one can close one’s eyes and just listen to, but missing its symbiotic relationship to the dance – all components of it – would be unthinkable.

Marcellus and Wendtlandt are stationed on multi-level “pedestal’s” upstage left, but occasionally one or the other (or as I recall, both) descend to positions on the stage floor, singing as the movement swirls around them, and then returning to their positions. One example comes quickly to mind, possibly because it’s the simplest to describe: at a point during the course of the dance, Marcellus descends to the stage singing (or sounding) music that can be best described as adoration, and then, while continuing to sing, stands captivated by former NYCB Principal Lauren Lovette slowly moving in and out of different positions, looking like the epitome of what comes to mind when one thinks “ballerina” (something like a ballerina in a music box, but elegant, distant yet somehow also accessible, and most importantly, alive). That image, as well as others (including red-headed Meyers weaving throughout the stage action and seemingly being everywhere at once), is indelible, and is only one example the piece’s plethora of semi-isolated dance segments, and of the music cocooning the dancing. 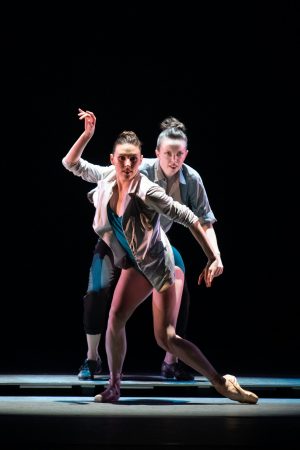 Toward the piece’s conclusion, Marcellus and Wendtlandt join dancers tapping on the elevated wood platform that sits up-stage center throughout the course of the dance. They’re not dancers (although Wendtlandt has previously performed with Dorrance Dance), but it looks perfectly appropriate, and not at all humorous. Like all the other component parts of Time Spell, they blend in. And after having highlighted each dance’s characteristics and strengths, gradually all of the piece’s component parts come together, under one roof, in one dance, with each component maintaining its identity but also being part of a larger, joyful, umbrella.

In addition to being as extraordinary as it is, Time Spell is also ceaselessly entertaining. The movement never stops, and although some have more opportunity than others, every dancer in the eleven-dancer cast has an opportunity to be the center of attention, to present a singular image, and to display his or her talent. These instances don’t all look alike, and aren’t as isolated from the piece as a whole as that comment may suggest. In addition to Dorrance, Peck, Myers and Lovette, they included Roman Mejia and Chun Wai Chan, both NYCB Soloists, India Bradley and Christopher Grant (members of NYCB’s corps), multi-faceted and multi-experienced Lex Ishimoto, Byron Tittle (a member of Dorrance Dance), and Cassandra Trenary (an American Ballet Theatre Principal). 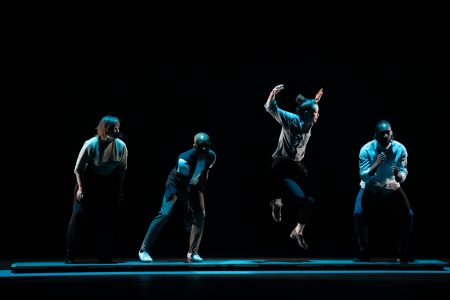 None of the other pieces compare to Time Spell, but they each had their own merits. The program opened with the New York premiere of Thousandth Orange (it premiered in 2019 at the Vail Dance Festival) which was choreographed by Peck to music by Caroline Shaw (exquisitely played by the Bergamot Quartet). It’s a fine example of a fledgling choreographer’s early work. There are few highlights (other than the neat-looking pose by all cast members when the dance begins and ends), but there aren’t any extraordinary moments either. Dancers in addition to Bradley, Grant, and Lovette, were ABT Principals Isabella Boylston, Herman Cornejo, and newly-promoted NYCB Principal Jovani Furlan. 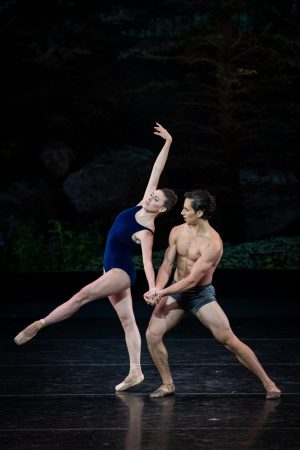 Another New York premiere, Swift Arrow, was sandwiched between Thousandth Orange and Time Spell. Choreographed by Alonzo King to music by Jason Moran (beautifully played live by pianist Sequoia Snyder), the dance is somewhat of a relationship pas de deux in which the two dancers, Peck in a simple dark blue leotard and Mejia, costumed in what can be best described as black underpants.

I suspect that the costuming may relate in some way to a cryptic program note suggesting that the dancers are a god-type figure (Mejia), and a supplicant (Peck) who, while coming close to him and then pulling away, repeats that process several times and ultimately, gives herself to her god. It’s far-fetched, but it makes a degree of sense, stretched as that interpretation appears.

Regardless, choreographically, Swift Arrow still comes across as a relationship dance, with all the relationship ebbs and flows, and all the emotional gloss, that such dances typically include. It’s not all soft and cuddly; there are hard edges in this choreography that help maintain viewer interest, and both Peck and Mejia do superb work.

The evening’s final dance, The Barre Project, Blake Works II, is a vehicle for the four dancers in the cast to show off. It was choreographed by William Forsythe and premiered digitally last year. Forsythe is a choreographer of considerable renown, although his work is far more popular in Europe than it is here. But this piece is “late” Forsythe, and it’s far less edgy than the (admittedly few) other Forsythe dances that I’ve seen. 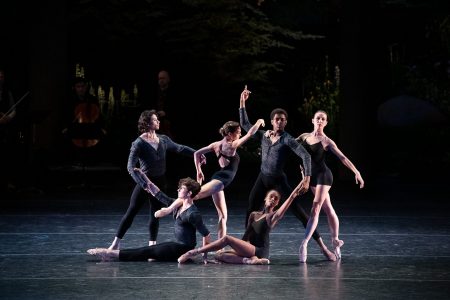 The Barre Project, Blake Works II (the accompanying music is composed by James Blake) begins looking like a derivation of the ballet classic Etudes. It doesn’t stay that way too long, but as it evolves, Etudes remains on the mind as its (very) distant cousin. The opening image shows Peck alone doing barre exercises that quickly become more and more elaborate and complex. Peck is replaced by Mejia, who progresses at the barre the same way, then she returns, and after more barre demonstrations she’s replaced by Ishimoto, who displays his own barre work, and she again returns. At first they form a pyrotechnic trio – and then, with Brooklyn Mack (now an “International Principal Guest Artist” who has appeared with major companies worldwide) joining the others, the piece eventually opens up into more duets, trios, and solos, with the barre retreating out of sight. 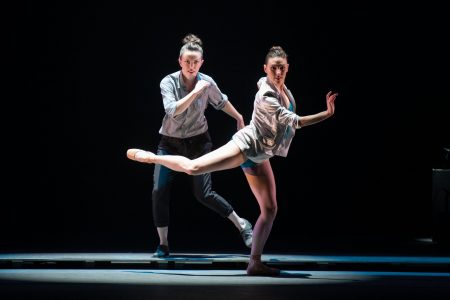 But its form is not nearly as significant here as its function: The Barre Project, Blake Works II, is a showcase for bravura displays by all four dancers. For example, the image of Mejia leaping from the stage right wings onto the stage, first appearing to the audience when his leap was at its apex – halfway up to the stage ceiling (or looking like it) – drew gasps of delight. It’s a guaranteed audience-pleasing dance.

Overall, this was an unusually fine program. It was Peck’s baby, and she deserves all the accolades that will inevitably come with its success. And if this program is an indication of the caliber we can expect from future presentations in City Center’s new “Artists at the Center” series, it’s certainly something for dance-lovers to look forward to.