Tom Gold is an unusual choreographer. Where other contemporary ballet creators experiment with up-to-the-minute subject matter or some ballet language du jour, Gold focuses on what he knows. And as a former New York City Ballet Soloist, what he knows is neo-classical ballet, and, in general, his dances attempt to present ballet his way – which is to make his pieces somewhat retro and simple-looking, but beneath that surface are surprisingly complex.

I’ve reviewed Gold’s programs previously, and the one presented at the Kaye Playhouse at Hunter College fits neatly with the others. This one, the company’s first live NYC appearance since the pandemic, might have benefitted from greater musical variety and pace, but it provided the same “simple-looking” but complex choreographic artistry that Gold has brought to his previous programs. It also benefitted from the talents of NYCB dancers, a group from which Gold regularly recruits many of his company’s dancers – giving him an opportunity to work with artists who have a similar dance background, and also giving these corps dancers an opportunity to be seen in featured roles. 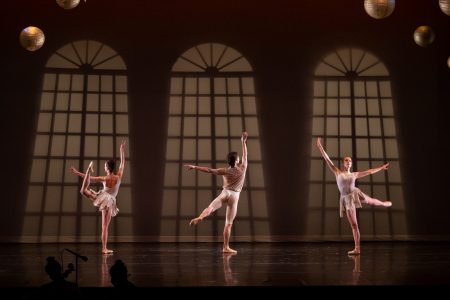 In last Wednesday’s program Gold presented three dances: Plan & Elevation, Intimacies, and Borrowed Time. Each illustrates a strength common to other Gold pieces I’ve seen: a focus on creating ballet movement to music without being burdened by an urge to be different. The results may, on the surface, not look particularly interesting – until one examines the intricacies within them.

At times, however, to an audience the intricacies and obvious effort of choreographing to music become more evident than the pleasure of seeing the result. To my eye, this was the case with the first piece on the program, but was overcome by the second and third program pieces.

Plan & Elevation has been simmering since before the pandemic began (it was supposed to have premiered during the company’s cancelled Spring, 2020 season) and, in whole or in part, has been performed in variety of venues previously. Choreographed to the eponymous 2015 composition by Caroline Shaw, the Pulitzer Prize winning composer whose music is more and more frequently populating the dancescape, and featuring NYCB corps dancers Claire Von Enck, Malorie Lundgren, Mary Elizabeth Sell, and Andres Zuniga, the music, and the piece, are grist for the kind of choreographic artistry that Gold specializes in, but it’s tough music to convert into dance.

The string quartet composition was created to commemorate the 75th Anniversary of Dumbarton Oaks, a building and grounds in Washington D.C.  Much of the original property became a National Park, but the sizeable remainder was deeded to Harvard University and is now a research institute (primarily, but not exclusively, with respect to Byzantine and Pre-Columbian art and landscape and garden architecture), as well as a setting for concerts and lectures – and it has been the inspiration for several musical compositions, including by Stravinsky and Copland. 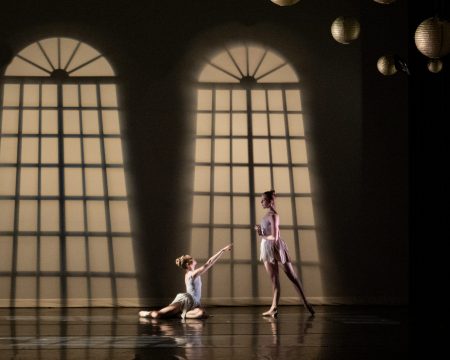 Shaw was the inaugural music fellow at Dumbarton Oaks in 2014-15. She wrote in a 2016 program note that she has always loved drawing the architecture around her, and that some of her lessons in musical composition were derived from these drawing exercises. In creating her “Plan & Elevation,” she returned to the idea of space and proportion. The composition’s title refers to the two ways of representing architecture: a birds-eye perspective (the “plan”), and a side view that shows the architecture’s height (the “elevation”).

But Shaw’s piece is not focused on architectural buildings. Rather, it’s on areas of the property’s grounds, and spaces (e.g., garden spaces) particularly meaningful to her. The piece is divided into five parts: The Elipse, The Cutting Garden, The Herbaceous Border, The Orangery (an area enclosed by windows, to house more tender plants and to provide a quiet respite), and her favorite spot in the garden, The Beech Tree. The music is quiet and restrained, befitting places of contemplation or the simply enjoyment of nature. None of this background is referenced in a program note.

I don’t know whether Gold used the complete score for his ballet (the program does not indicate that Shaw’s piece is excerpted), but that doesn’t matter. What does is that Gold may be attempting here to apply the same sense of simplicity and quiet contemplation into his ballet. [I find support for this in photographs I’ve seen of earlier incarnations of the piece, taken in landscape settings – though these may have simply been available locations for photo shoots.] 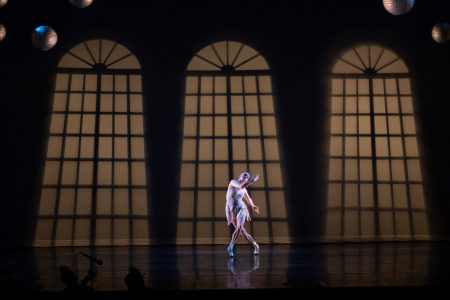 That’s all well and good – but the same qualities that make the spaces grist for contemplative thought and nature’s natural balance don’t easily make for an entertaining dance – even though one might think they’d fit perfectly with his sense of form and choreographic structure. Of course, it’s certainly possible that Gold had no intention here of applying Shaw’s inspiration to dance, but the indicia that this was his intent are too obvious to ignore – including Carl Sprague’s set, which consists of clear “windows” suggesting an enclosed but airy space (like the Orangery at Dumbarton Oaks).

Maybe the difficulty I had with the piece is that the plans and elevations of dance architecture require animation rather than some fixed positioning. Choreography isn’t horticulture or a chance for one’s body and mind to rest (although there’s some commonality, as there is in many forms of art). But seeing the slow evolution – the growth – of choreographic positioning just looked somewhat artificially confined here. In any event, even though Gold included brief lifts, a lovely little duet, and a swirl that to my eye mimicked flowers in bloom, and notwithstanding fine performances by the dancers, I would have preferred more movement and some visual excitement – qualities that the music (which at certain points sounded baroque), for all its purity of sound and space (and as well-played as it was by the string quartet), couldn’t provide.

The evening picked up considerably thereafter. 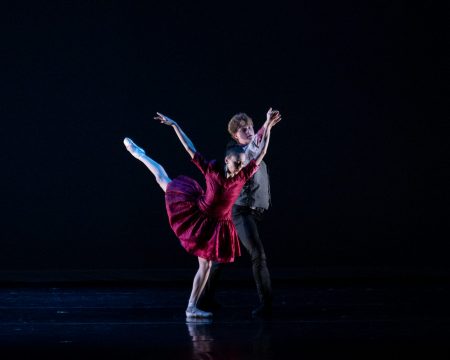 The world premiere of Intimacies, a duet danced by Lauren Collett and Jules Mabie, followed, choreographed to “Possible Stories” by Anna Weesner.

Intimacies is choreographed to “Possible Stories” by Anna Weesner. I’m sure that Shaw’s piece included significant complexity, but it was measured and unobtrusive. Weesner’s music here includes complexity but in a much more apparent way, and with Intimacies, Gold takes advantage of it. Gold’s choreography is every bit as finely honed and precise as it was in Plan & Elevation, but here it looked far more interesting. 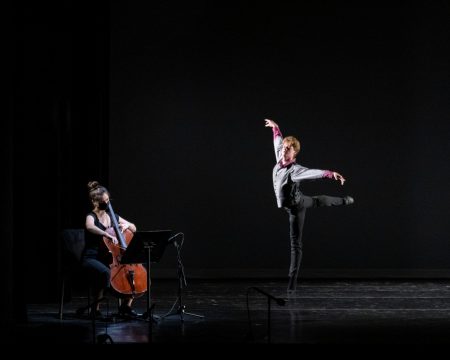 The dance provides a series of somewhat interconnecting episodes, each one sufficiently different and featuring Gold’s usual seamless complexity (although I thought there were a few too many hard stops), and each building in intensity such that it maintains visual interest throughout. And while Mabie danced perfectly well here, Collett was far more vivacious, and lit up the stage. 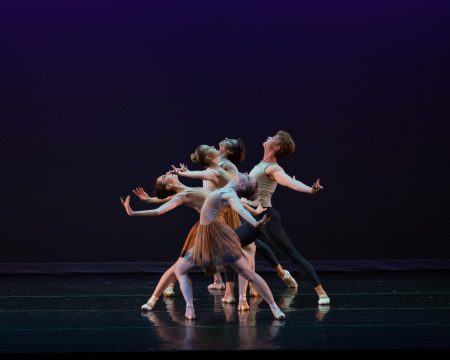 The concluding piece, the NYC premiere of Borrowed Time, was Gold’s most complete piece on the program. Even though it, too, isn’t showy for its own sake, Gold’s classical choreographic complexity was evident throughout. The piece involved five dancers (Von Enck, Collett, Lundgren, Mabie, and Zuniga), and it was a pleasure to watch it all come together.

Borrowed Time is choreographed to unspecified selections from British composer and musician Dave Maric’s identically-named composition (2003, but updated several times). In Maric’s piece the interplay and counterplay of marimba, drums and trumpet (and perhaps other instruments I couldn’t identify) enabled Gold to create a greater variety of movement and balletic complexity than he did in Plan & Elevation, while maintain the purity inherent in Maric’s composition. Perhaps it was there in Plan & Elevation as well, but here it was somewhat more apparent, and it blended into more moments of expansive choreography that made Borrowed Time more interesting to watch. 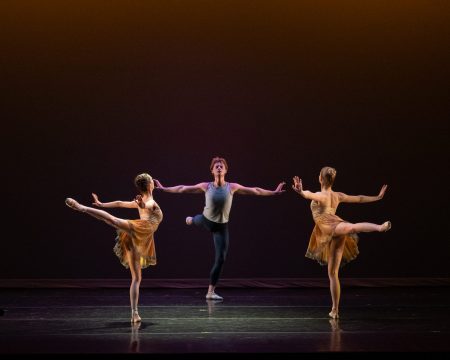 And each of its dancers shined. I’ve written about Sell previously; everything she dances is done well, as was the case here. And I’ve already been watching Von Enck since she joined NYCB (as well as her sister, who I spied in the audience); and the more measured complexity of Gold’s choreography here suits her well. Of the others, and aside from what I’ve already said about Collett, now I’ll be able to identify and pay more attention to them in NYCB’s (and maybe Gold’s) future programs. 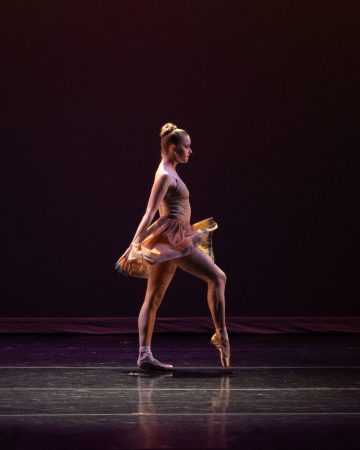 Perhaps because his originality is more subtle than other choreographers, and/or because his choreographic stage-scope is limited by the usual financial concerns facing small companies, Tom Gold’s choreography doesn’t carry the cachet that choreography by other contemporary choreographers does. That’s unfortunate, because his ballets, like those in this program, are often the equivalent of visual art miniatures: little gems that are easy to overlook. With the “real” end of the pandemic on the horizon, maybe audiences and reviewers will be able to open themselves up to the beauty that exists in smaller choreographic packages. Regardless, and other than Plan & Elevations (which I suspect was more my problem than Gold’s), this program was another example of Gold’s mastery of detail and choreographic invention.