Sometimes reviews are easy to write; sometimes they’re more difficult. This review of Tom Gold’s latest choreographic effort, Spectral Preludes, is easy. I’ve enjoyed most of the Gold’s creations for his company, Tom Gold Dance, since I first saw the group several years ago. Spectral Preludes, which celebrated its world premiere during this engagement (the company’s 2019 New York Fall Season), is among his best. 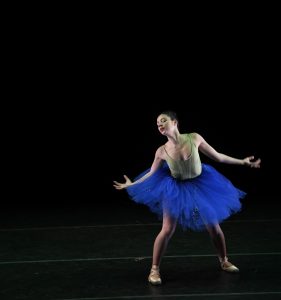 Gold’s piece is choreographed to 24 Preludes for Piano, Op. 41, composed in 1999 by pianist and composer Lera Auerbach. Born in Russia (near Siberia) in 1973, Auerbach defected to the U.S. when she was 18 to further her piano studies (earning degrees in piano and composition at Juilliard). I was not previously familiar with Aurbach’s work, but – at least judged by this piece and to my amateur musical ear – it is classically based, at times vivid, at times subtle, concurrently intricate and simple, and consistently dramatic. I heard much of the Romantic, and occasionally of the macabre in this piece, including segments that brought to mind Franz Liszt (Totentanz) and Hector Berlioz (Symphonie fantastique). Auerbach’s composition isn’t that obvious – there are moments of sublime delicacy, the equivalent of filigree texture (in contrast to the pounding of “death” surrounded by the sounds of flat and minor keys), which, in context, hint at dream states that lead to, or that arise from, the spectral sounds. 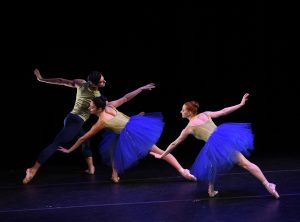 It’s that sense of the macabre, and a little of that “dream state,” that Gold picked up on, together with the theme and variations concept that connect the relatively standard segments of the 24 Prelude form together. Regardless, the dance has the intricate texture and variable pacing and tone of Auerbach’s piece, but directs the viewer to “see” the music in a different way than just by listening to it – a la George Balanchine. Gold, a former New York City Ballet soloist, made Auerbach’s final Prelude the first of his dance (switching the order of the music as Balanchine sometimes did), with the remaining Preludes following in the order that Auerbach presents them thereafter (1-23). As a consequence (and, obviously, intentionally), the more dramatic “theme” is stated at the outset, followed by variations on that dramatic theme. The result is a ballet with a decided macabre, spectral, bent. 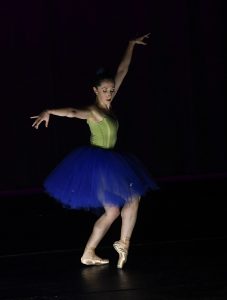 Don’t get me wrong. Spectral Preludes is not about ghosts, or even the macabre – although occasionally I thought one or more dancers may have been seeing apparitions. It’s just a sense, an ambiance, which Gold exploits as he does the “theme and variations” aspect of Auerbach’s work. And here the visual variations aren’t necessarily variants on a basic musical theme (the component parts of Auerbach’s piece aren’t either), but Gold uses identical (and fleeting) choreographic images to tie the Preludes together, just as Auerbach’s Preludes repeat musical motifs (but not in a way that’s bound to some particular musical phrasing). So a choreographed image from, say, Prelude 7 (I’m just picking a number at random) will be repeated in Prelude 8, and then many if not all these images get repeated in the concluding (in Gold’s arrangement) Prelude. 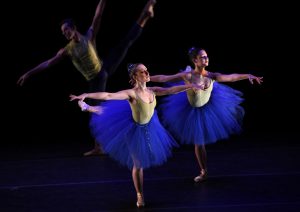 Trying to describe each of the 24 dance Preludes beyond the general description above is not warranted – and not possible based on one initial view: I can’t take notes quickly enough to record all the choreographic variants. Suffice it to say that the ballet is abstract in that there is no narrative (there may be a thematic progression of sorts from one Prelude to another, but it’s subtle), and each Prelude, but for the briefly related motifs, has its own character and dancers, echoing the music. Indeed, one of the hallmarks of this piece (as well as Gold dances in general) is that although the choreography is, of course, framed by the music (and may match movement to certain beats for emphasis – like movement synchronized to what sounds like a ticking clock), it’s not wedded to each rhythmic beat. One Prelude would involve the entire group of five dancers; another would focus on the two men, or the three women, or be led by one of the women, or it could be fluid as dancers enter and exit within a particular Prelude. The result is suite of short dances that are related to each other like choreographed pictures at an exhibition, held together by that macabre ambiance and the quality of Gold’s craftsmanship. I sensed that some members of the audience at the performance I attended may have preferred a dance that “went somewhere,” but that’s not what Spectral Preludes is. 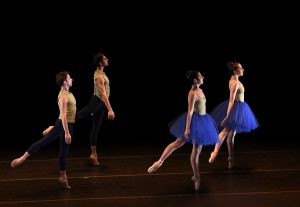 Gold’s choreography for Spectral Preludes is not simple – indeed, at times it can be wickedly difficult. For the dancers who presently comprise the company, even those who have previously appeared with Tom Gold Dance, I sensed it was a considerable challenge – and that’s as it should be. But they managed to pull it off notwithstanding the level of apprehension I occasionally saw. Evelyn Kocak, formerly a soloist with Pennsylvania Ballet, Michael Sean Breeden, a former member of Miami City Ballet, and Abigail Mentzer, another former Pennsylvania Ballet soloist, have each appeared with the company in prior programs. New to the company (at least new to me) were Kristina Hadjipetkov and Davide Riccardo, each of whom has significant ballet backgrounds, including training at the School of American Ballet (and Riccardo became a member of NYCB’s corps this year) and stage presence to match. The piece was further enhanced by pianist Arthur Williford’s accompanying live performance of Auerbach’s score. Costumes were designed by Marlene Olson Hamm.

Spectral Preludes doesn’t require a lot of stage space, but I thought that a slightly larger venue might be to its advantage. But it deserves to be presented again regardless of the venue – and if it is, I would strongly urge those interested in quality original ballet to see it.