The Manhattan streets were lined with plowed piles of snow from the previous day’s storm that had frozen in place, leaving barriers too solid for anything except ice picks to penetrate, and changing typical street-crossing challenges from fording slushy streams to climbing mini mountains. Next time the mayor needs to clear the streets, maybe he should recruit Tom Gold Dance to do the job: the energy generated during the company’s performance last night would melt ice peaks.

Tom Gold Dance returned to John Jay College’s Gerald W. Lynch Theater on Tuesday for its sixth annual season with a set of two New York premieres, Served and Oasis, sandwiching a world premiere pas de deux, Counterpoint, all three choreographed by the company’s Founder and Artistic Director, former New York City Ballet soloist Tom Gold. The most remarkable common denominator among the three of them, aside from overall craftworthiness, is that there is no common denominator. Each of the three pieces is totally different, and each is a quality piece of work demonstrating not only his range, but giving his ensemble an opportunity to demonstrate theirs. 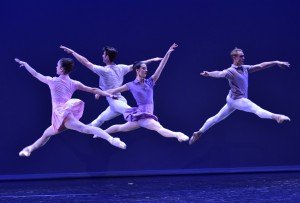 This year, Gold’s company included four dancers who have appeared with his group previously – NYCB dancers Meaghan Dutton O’Hara, Kristen Segin, and Daniel Applebaum, and James Shee, formerly with the National Ballet of Canada – and six who are new to it: Mary Elizabeth Sell, another NYCB dancer, and Morgan McEwen, Courtney Nitting, Allynne Noelle, Thomas Garrett, Zachary Guthier, and Evan Swenson. Of these, the women did particularly impressive work.

I’ve commented on Gold’s choreographic variety following other TGD annual programs I’ve seen in 2014 and 2016. Each one of his dances is unique, not only because he utilizes different choreography and stylistic emphasis for each (though all within the classical ballet vocabulary), but also because each dance generates a different emotional responses in his audiences. However, I also consistently noted that there wasn’t anything particularly innovative in his movement quality – not so much a criticism as an observation: not everything needs to be cutting edge. But inventiveness is evident in much of last night’s program – particularly in the pas de deux – and perhaps it was there all along and I simply missed seeing it. Regardless, Gold doesn’t draw attention to it; it’s just another component of his choreography. If you blink, you may miss it. 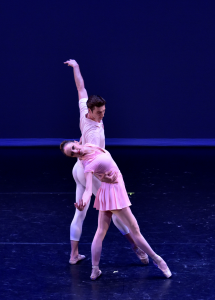 Served and Oasis are fun dances to watch, but they’re loaded with “stuff” that makes them more than that. With Served it’s breathtaking speed – befitting the group’s NYCB connection. With Oasis, it’s sensual movement not often seen at NYCB.

The opening piece apparently received its title from Gold’s purported inspiration – a tennis match. Arguably the dancers are the equivalent of tennis balls ‘served’ from the two sides of the net/stage. That’s not based on anything that Gold includes in program notes – there aren’t any. It just makes sense given the ballet’s title. And they certainly move as fast as served tennis balls – the action is virtually non-stop, and primarily at top speed. It’s exhilarating – and exhausting – to watch.

But that description, though it may reflect the genesis of the dance’s title, doesn’t do the piece justice. While not “important,” whatever that might mean, Served is more than a bunch of dancers “served” from the wings: it’s a riot of color and vitality, and a prime example of camouflaged complexity. The nine dancers, each wearing simple leotards and skirts (or fitted pants for the men) of different hues, create a multicolored movement montage that seamlessly (and continuously) shifts gears from the cast as a whole to subgroups of men or women, trios, pairs or solos, and back and forth. One might think that after awhile, one would tire of the constant action. But because there’s so much movement and stagecraft variety, I suppose like served tennis balls and back and forth returns, no two volleys are the same. 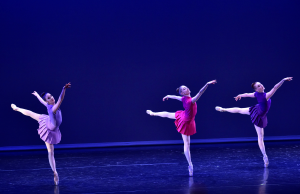 Be that as it may, one can carry the tennis analogy just so far. The piece works because Gold has created intriguing segments to the changes in tempi in the accompanying score (Schubert’s Der Wanderer, neatly executed, live, by pianist Xak Bjerken), because the speedy pace never comes across as an end in itself, and because his staging never stops creating seemingly infinite permutations on positioning and use of all available stage space. One never knows where the next… serve… is coming from or the composition of it. And the dancers, working fairly constantly at warp speed, executed outstandingly. I particularly appreciated the solo efforts by the sprightly McEwen (in orange) and Noelle (in pink), and Garrett’s oversized presence and partnering skills. All three have extensive ballet backgrounds: McEwen danced with Richmond Ballet and has her own New York based company (called MorDance); Noelle, whose command and appearance brought to mind former NYCB principal dancer Merrill Ashley one moment and current soloist Megan LeCrone the next, is a soloist with Suzanne Farrell Ballet; and Garrett, also a Suzanne Farrell Ballet soloist, seemed to tower over everyone else on stage and gave the piece the sense of having a central focus. 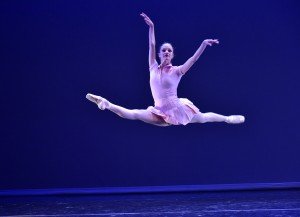 Counterpoint is more of an exercise, but one that shows another side of Gold’s choreographic abilities. To two pieces by Steve Reich (New York Counterpoint and Nagoya Marimbas), the dance has an otherworldly feel – abetted by the costume for Dutton O’Hara, which is a silver outfit that doesn’t conform to any attire I know of on this planet. Her partner, Applebaum, is shirtless with burgundy tights. (Costumes were by AREA NYC.) So I suppose even in costume one is a counterpoint to the other. The costuming might also reflect the clash of cultures suggested by Reich’s pieces. 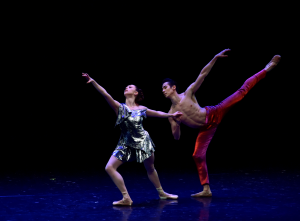 Though not as accessible (or as entertaining) as the other two program pieces, Counterpoint is one of Gold’s more interesting dances. It’s structured similarly to a classical grand pas de deux – except there’s more structural variety here than one might usually find. But it’s choreographic content rather than structure that makes this dance interesting. It’s a more challenging piece to like because it’s relatively cerebral, and fiendishly difficult.

Although she executed well, Dutton O’Hara didn’t look particular comfortable with the choreography – because it isn’t comfortable choreography, and I got the impression that a degree of looking uncomfortable was programmed into the piece. For example, as I recall there were a nifty series of fouettes that finished intentionally, but awkwardly, with the working leg’s foot noticeably, and awkwardly, flexed. And there’s stuff thrown in – rapid-fire hand gestures, for instance – that don’t make any sense to me. And then there’s a segment out of nowhere that looks “jitterbuggy” (appropriate for the music, but inconsistent with everything else ).  I don’t know where Gold was trying to go with this, but for this particularly dance, it doesn’t much matter. It just looked… enigmatic. In my notes I wrote ‘urban inscrutability’. Maybe that’s it; or maybe not. 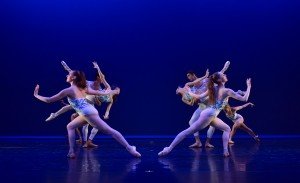 Oasis, on the other hand, is crystal clear – presumably like water at an oasis. If Served would have helped melt the outside ice mountains by the heat generated from its energy level, Oasis would do the trick by the warmth of its sensual and atmospheric heat.

I must confess that notwithstanding its title, I saw Oasis as a beach dance, complete with costumes (by Marlene Olson Hamm) the color of white beach sand, with imprinted upper body designs in aqua of gentle waves on some, and “leafy” images on others. Very simple, very cute, and very classy. And very beach blanket bingo. But I suppose if there were frolicking at an oasis, the costumes would work for that too. 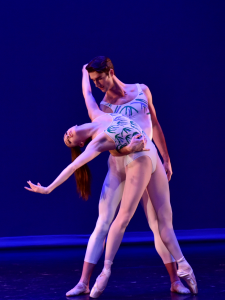 But Oasis evokes more than frolicking at a beach. Or an oasis. Gold again has melded his choreography to the music (“Lucifer” from John Zorn’s Book of Angels), yielding a visual sense very different from his other pieces. [I saw another dance that Gold choreographed to Zorn in 2014, titled La Plage (The Beach), so I suppose he couldn’t reuse the same title.] Although it’s constant movement all the time, like Served, here the movement quality is intentionally sensual and sultry, filled with languid gyrations and swivel hips appropriate for a day at a beach during Spring Break, and with a predominant motif of in-and-out pigeon-toed movement, as if pushing through beach sand while concurrently trying to avoid the blistering heat when the soles of your feet hit the sand. And the ten dancer cast seemed to be having as much fun with it as the audience did watching them.

I understand that Zorn’s composition is supposed to have been comprised of four movements, but I sensed three segments to Oasis. The first is super-fast; the second slow, and the third fast with a hodge-podge of sound that evokes at one point Klezmer and at another point something more characteristically middle-eastern sounding. Ok, maybe it is an oasis. 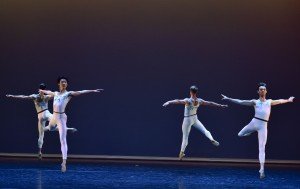 With this program, TGD again accomplishes what has become an increasing rarity – it presents ballets that are at least as calculated to satisfy an audience as they are to satisfy its choreographer’s creative urges. On one hand, I’d appreciate more performances in NYC than one annual program. On the other hand, maybe it’s best to let Gold’s dances marinate in his mind over time to avoid the temptation to create too much too often. In any event, programs by Tom Gold Dance have become a must see – because they feature high quality dances and dancers and because they’re such fun to watch – even if you have to climb ice mountains to get there.