Most sculpture gardens that I’m familiar with are quiet places to rest, where the sculptures on display complement the calming experience, as well as provide a man-made contrast to the natural display around them. I’ve never seen the sculpture display at the TurnPark Art Space in West Stockbridge, Massachusetts that provided the inspiration for Tom Gold’s most recent dance, Apparatus Hominus, which I saw at the second of two performances last weekend in what was Tom Gold Dance’s introductory Fall New York season, but the sculpture / nature connection is both a good thing and a bad thing.

The good thing: like the best of sculpture gardens, Apparatus Hominus allows one to observe and reflect on nature’s simplicities, and complexities, in relative peace and quiet, with nothing to interrupt one’s thoughts except the ambient sounds of the wind rustling through the trees, the silent sounds of fellow-travelers, and the atonal drone of the occasional drone hovering overhead. The bad thing: Apparatus Hominus is a calming experience, maybe too calming. 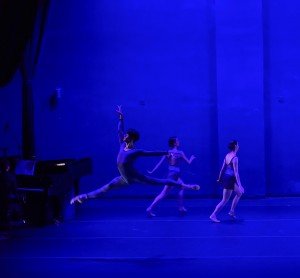 Two of the most significant components of any dance are the choreography and the performances. In this respect, Apparatus Hominus excels. The dance had its initial presentation last July, during what has become an annual company residency in the Berkshires. Originally set to four dancers, the piece now has been expanded to accommodate two more. Not having seen it in its original form, I can’t comment on how it initially looked, but increasing the number of dancers and dance segments probably was a good decision, if for no other reason than that it provided greater opportunity to see Gold’s choreography and the company’s superlative group of dancers.

Gold is a former soloist with New York City Ballet, but that fact doesn’t define his choreographic style, unless one considers that a certain level of artistic sophistication comes automatically from having been a member of that company. Not surprisingly, his steps are ballet steps, and his dancers are ballet dancers, but the choreographic result can’t be pigeon-holed that easily. In general terms, his choreography is balletic and lyrical, but it’s not exclusively that. Nor is it wedded to a particular orthodoxy that might illustrate how ‘contemporary’ or how avant-garde it might be, or how it might reflect the choreographer’s ‘unique’ vision. I suppose it comes within the ambit of contemporary ballet, but that term is so broad that it’s relatively meaningless. What it is is finely crafted workmanship that doesn’t draw undue attention to itself, but is multi-faceted and far more complex than it appears.

The choreography for Apparatus Hominus is consistent with that description. The piece is divided into seamless segments for a single dancer, subsets of the six dancers, or the entire cast, and no segment appears to be directly related, choreographically, to another. That degree of variety in a dance for six performers that lasts over an hour is difficult to accomplish. 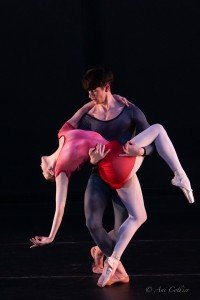 And the dancers are first-rate, with two who are new to the company, Tiffany Mori (a member of St. Louis Ballet) and Barton Cowperthwaite (ballet-trained; New York-based), joining company veterans Mary Elizabeth Sell, Shoshana Rosenfield (the first a current, and the second a former, member of NYCB), Stephanie Williams (a member of American Ballet Theatre), and James Shee (former member of National Ballet of Canada).

But more than solid choreography and superb execution by the cast is necessary to create a successful dance, and while there is a surfeit here of both, the overall impact of Apparatus Hominus is too much on a singular emotional level, and the few segments that seem to change the pace or introduce visual punctuations are overwhelmed by those that, notwithstanding the intelligence of the choreography, aren’t as exciting. In part, the fault, if that’s the appropriate word, is in it being too much like a leisurely walk in a park. More significantly, it uses a score that bathes the action in ennui. The selections from Nico Muhly – Drones and Piano, Drones and Viola, and Drones and Violin, would appear to be inspired choices to reflect a sculpture garden’s inspiration. But music comprised largely of similar sounds (I don’t doubt its complexity) can have a soporific effect (despite it’s being well-played, live, by Katherine Liccardo and Joseph Liccardo). Apply choreography intended to convey the emotional response to walking leisurely through a nature space with metal sculptures seemingly around every bend in every path and the result is something to look at and appreciate its detail and nicety, but generally not to get emotionally involved with.

The dance begins well, with a solo for Cowperthwaite that sets a tone of power and majesty. With his arms frequently stretched wide, I saw tree limbs, powerful avian images, and maybe both at the same time: perfect for an introduction to a nature space. The segments that follow are certainly pleasant enough, and as densely filled with choreographic variety as I’ve previously described, but they leave no lasting impression – maybe akin to the sculptures in TurnPark Art Space, they may stand out, but they also blend in so as not to distract from the natural settings that surround them. Every once in awhile another sequence emerges that’s particularly strong and interesting. The solo for Shee, for example, is quite powerful, and Shee here delivers his finest work since I first saw him with this company. And the pace of each segment was not completely monotonic: there were one or two segments when I could hear the pace of the music, and the accompanying choreography, increase noticeably. [There’s another Muhly musical component used in the piece – excerpts from the soundtrack to Kill Your Darlings, and perhaps that’s where this music came from.]  What was needed was the acoustic and choreographic equivalent of a bolt of lightning or a scary encounter between a couple of hyperactive squirrels, but that wouldn’t have been compatible with a peaceful walk through TurnPark Art Space, or from seeing the sculptures displayed there. 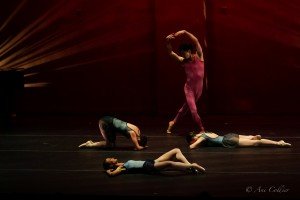 And one would think that a dance inspired by the site-specific sculpture gardens at TurnPark would bring to mind the sculptures there. I checked TurnPark (vicariously via the Internet – it looks like a wonderful space; typically arts-focused for a location in the Berkshires), and although it’s certainly possible that Gold saw a different group of metal sculptures from those indicated in the mini-travelogue, I didn’t see anything in the choreography that was obviously connected to any of them.  Of course, there doesn’t have to be any direct connection: what Gold presented could simply have been movement “inspired” by the metal sculptures in an abstract way, or something reflecting the feeling of seeing or walking by them in a pastoral setting. But in this context, with the connection to TurnPark so significant, I expected a connection.

Every once in awhile I thought I saw such connections, but the references were too vague to be clear. For example, in a segment that included a group of women, I thought I saw circular patterning that would have fit “Heliograph 2” (artist: Vadim Kosmatschof); perhaps Cowperthwaite’s solo, coming at the piece’s beginning, was intended as a sort of gateway, and was intended to reflect, abstractly, “Talus Gate” (artist: Gene Montez Flores); and maybe Shee’s solo reflected “Don Quixote with a Flower” (artist: Nikolai Sillis), which segued into Shee and some of the women commenting on “Lazy Ladies” (artist: Nikolai Silis). But I saw nothing of the whimsy in these and other sculptures (like “Bohr and Einstein,” artist: Vladimir Lemport), and attributing specific segments to any of these or other specific sculptures is a stretch. About the only direct connection I could gather from Apparatus Hominus is the sense of moving along a path as the segments progress, and the dancers exiting the stage / the park unceremoniously when the piece ended, as if their journey would continue unseen. 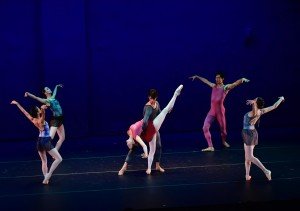 But the dance segments work on their own as abstract movement, so there being insufficient apparent connection to any of the park’s sculptures isn’t as concerning as the above description might sound. More problematic is the pace imposed by the music. To the extent everything sounded the same, even though the sounds were different (and certainly the sound of a violin differs from that of a piano), the segments of the dances left a similar impression. The “drone” sound in Muhly’s compositions dominated the other sounds, and “droned out” much of the choreography. Which is a shame, because the choreography itself is so good, and because the dancers shined. In addition to Cowperthwaite and Shee, I was particularly impressed with the work by Mori and Rosenfield, and the execution by Williams and Sell is always compelling.

I’m advised that Apparatus Hominus, which has no specific meaning beyond a general reference to the park’s metal sculptures (and by extension, the dancers in the piece) as ‘human apparatus’ is still an evolving work, so perhaps some exclamatory segments, and more musical variety, will be added later. Considering the caliber of Gold’s choreography and the members of the company, that’s something to look forward to.