When I last attended a performance of Tom Gold Dance, I was thrilled to see superb professional dancers out of context and dancing in a relatively close-up setting, and was pleasantly surprised by Gold’s choreographic ability evident in the three dances on that 2014 program. 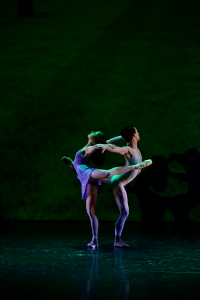 This year’s performance, the company’s fifth anniversary New York City season, was equally strong choreographically – perhaps more so. Indeed, instead of three pieces, in Poetic Episodes, which had its world premiere Tuesday night at the Gerald W. Lynch Theater, Gold has choreographed a suite of six short ballets, each significantly different from the other. And as if that didn’t sufficiently display choreographic variety, most of these pieces were further divided into two relatively distinct segments. Gold’s mastery of choreographic form and texture, and the performances generally by the company’s dancers – most of whom are members of New York City Ballet or have an SAB background – made the evening worthwhile.

Initially, a few words about Gold’s choreography. This is filigree work – as carefully constructed as the words, and lines, in a poem. It’s not stylistically inventive, there’s nothing particularly quirky about the steps or the combinations, but that only reinforces the sense of choreographic purity. Gold, a former NYCB soloist, doesn’t try to hammer home his craftsmanship – it’s just there, breathing.

There is nothing in the presentation that doesn’t work on a component by component basis. Aside from Gold’s choreography, the projected backgrounds (by the company’s Projection Designer, Chelsie McPhilimy) set separate ‘scenes’ for each of the dances; the costumes (by Marlene Olson Hamm) are attractive and enhance the individual dances; and the musical backgrounds selected (or perhaps, in some cases, specifically composed – the program doesn’t say) are appropriate for the mood of each dance and dance segment. And structurally the ballet as a whole is exactly what it purports to be – relatively discrete episodes inspired by a group of poems related to each other by their common author, Pulitzer Prize winning minimalist poet Charles Simic, and united loosely by a common thread – the central dancer’s reverie of various events (whether they are relived or purely imagined doesn’t matter), including, possibly, a search for his life’s meaning. That’s quite a broad contextual palette for a non-narrative dance that lasts less than an hour.

It’s unfortunate that Simic’s poems are not set forth in the program. Although the words could distract from the action on stage, they nevertheless provide something of a template. For example, Simic’s On the Meadow, which is the title of the ballet’s initial segment, envisions as a predicate a couple sitting on a porch watching wild wind, and wondering as they watch about “A lost thread or two/Cleverly tied end to end.” The ballet’s segments can be seen as lost threads of its protagonist’s life, tied end to end, in some effort to find his life’s meaning.

When Poetic Episodes actually begins is uncertain. As the audience files into the theater, most of the nine-dancer company are warming up at barres. Three large windows span much of the stage’s back wall. Seen through the windows, the ‘sky’ outside darkens ominously. Eventually, all but two of the dancers depart into the wings, the stage itself darkens, there are sounds of thunder, and lightning is seen through the windows.

The two dancers remaining on stage, Anthony Huxley and Sara Adams, both NYCB members, look out the window presumably watching the approaching storm (‘watching wild wind’), then retreat into their great room. Positioned center stage, Huxley removes his outer costume, hands the clothing to Adams, and assumes a contemplative position. Looking somewhat bemused, Adams thereupon snaps her fingers (as if summoning some exterior force), the stage darkens further, the windows disappear, a central spot beams over Huxley’s body, and the dreamscape, which is 98% of the ballet, begins.

For the first dance in the suite, an image of a meadow is projected against the stage back wall. To unidentified music by Toru Takemitsu (a Japanese-born composer of international renown whose music incorporates his own musical heritage as well as Western influences by, among others, Stravinsky, Webern, and Cage), Huxley contemplates…something – presumably events in his life. Gradually, the music changes to something less contemplative but still dreamlike (by Brian Shank, the percussionist in the live four-person ensemble that accompanied the ballet), and dancers populate the stage as either memories or visions.

The tableau is subtle in this first dance, but it quickly changes in the second dance, titled (after another Simic poem) Theatrical Costumes. To projected old-fashioned black and white movie clips of city streets and the facades of buildings on them, the protagonist watches people he encounters and with whom he interacts – each with his or her own facade. At this point, to music by Rachmaninoff (unidentified), which segues neatly into an instrumental version of Lady Gaga’s Bad Romance, the ballet comes alive with activity, and Gold’s facility with bringing individuals and groups of dancers together, breaking them up, and reconstituting them in different forms, is most vividly displayed. I took what appears to be the primary dance in this segment to be a city relationship that doesn’t work out (Huxley and Lyrica Blankfein, a former SAB student and member of the original cast of Susan Stroman’s Little Dancer), but it doesn’t really matter. 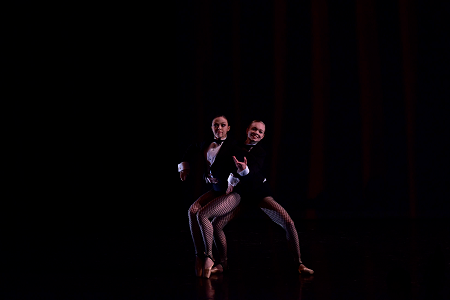 The following dance, My Magician, in front of a projection of a closed theater curtain, has Huxley contemplating the unpredictable and somewhat magical forces that control his life – or he simply remembers attending a magician’s performance. The dance itself is very different from others, and is similar to ‘character dances’ in more elaborate ballets, except here the ‘characters’ are a magician and her companion/dummy/fellow magician, and both parts of it (the first to Bach, the second to jazzy music by Cliff Burwell – a composer best known for Sweet Lorraine) are delightful. The top-hat and tails magician-suited Lydia Wellington and Marika Anderson, both NYCB dancers, do a super job with Gold’s clever choreography.

From here, Huxley’s memory takes him In the Library – in front of a projection of a library interior (the George Peabody Library at Johns Hopkins University in Baltimore – but my first thought was the ‘library’ at Hogwarts, which ties in neatly with the preceding segment), searching for meaning amid the books and library denizens (Daniel Applebaum, a NYCB dancer, James Shee, formerly with National Ballet of Canada, and Shoshana Rosenfield, formerly with NYCB), whom I took to be either a librarian or the embodiment of an appealing distraction.

A detailed description of the two dances that form the balance of the piece, Leaves (in a park setting), and History of Costumes, the piece’s conclusion, would be prohibitively lengthy. But the first includes a lovely duet between Huxley and Adams – what is obviously a formative memory in the protagonist’s life, and the second ties it all together with the reappearance of his life’s component memories, the characters in his life (including Elinor Hitt, a striking dancer formerly with the Pennsylvania Ballet who I have not previously had occasion to mention) in a choreographically complex and upbeat final segment to more of Shank’s music. When the music ends, Adams reappears to ‘awaken’ Huxley.  The physical (and emotional) storm has passed.

As fine as the choreography is, however, Poetic Episodes is almost too poetic. By that I mean that in the end it comes across as concise and deceptively lightweight as the minimalist poetry that inspired it. And despite the variety of (and within) its individual component dances, the ballet has a gentle, dream-like quality throughout. Though it’s hardly as dense and not nearly as obviously introspective, as it unfolded it brought to mind Jerome Robbins’s Watermill, which is a mark of its fine craftsmanship, but also a puzzlement that leaves an audience underwhelmed. If Gold revisits Poetic Episodes, and unless the poems that inspired this piece were part of a specific grouping, he might want to include a Simic poem (if there is one) with more obvious conflict, which might provide the ballet with not just a series of episodes with a single center of gravity, but a greater overall sense of gravitas.

In any event, Poetic Episodes is another feather in Gold’s choreographic cap, and ballet lovers should look forward to his company’s next New York season.