Some things are a given. Like the sun rising in the east. Like April showers that bring May flowers. Like always hitting a traffic jam (or a subway delay) when you’re in a hurry to get somewhere. Like my being late to post reviews. One of these “givens” is the quality of Tom Gold’s choreography. Having only recently been introduced to his company (recently being five years ago; the company was formed in 2008), I’m continually surprised at the variety, as well as the skill, that his choreography reflects. The common denominator among all his pieces is that there is no common denominator.

For this year’s annual season Gold outdid himself, presenting three pieces of indisputable quality that couldn’t have been more different from each other. One, Significant Strangers, was a world premiere; a second, Blind Revelry, was a New York premiere; and the third, Counterpoint, was one I’d seen two years ago, but which here looked reborn. Each demonstrated, in addition to craftsmanship and variety, another quality often absent from contemporary ballet: they were all hopelessly interesting, especially if you value a challenge in addition to enjoying a clever choreographic presentation. Significant Strangers is an example. 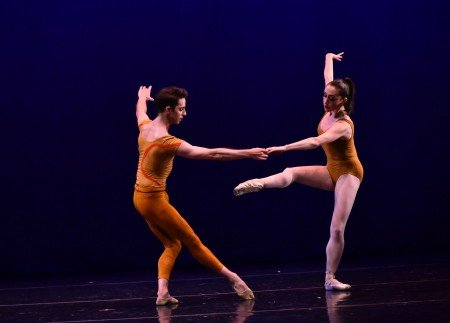 I had not heard of the composition by Leonard Bernstein that Gold, a former New York City Ballet soloist, uses as the foundation for this dance. Not knowing anything of the score forces one – or at least me – to try to figure out what it’s doing being part of the dance (as opposed to having a preconceived notion of the music, and whether the dance “fits” or allows me to see the music in a different way). That’s what I tried to do here. Sometimes it’s just a matter of the music fitting the choreographer’s vision of the piece, which is fine. In other situations there’s an intellectual connection. It took awhile before I figured out what Gold was doing, but once I did (or at least think I did), I recognized how extraordinarily polished a dance Significant Strangers is.

Beginning in 1942, Bernstein created brief compositions to commemorate the birthdays of people significant to him, who may well have been strangers to each other. The first, Seven Anniversaries, included “tributes” to, among the seven, Aaron Copland and Sergei Koussevitzky. These musical gifts were even pithier than musical short stories. Some lasted minutes, some seconds; they conveyed the impression Bernstein had of these peoples’ characters, and then stopped. Each is a unique jewel. Together, however, they comprised an eclectic but remarkably coherent suite of musical miniatures. After the success of Seven Anniversaries, Bernstein followed with Four Anniversaries in 1948, Five Anniversaries in 1949-51, and Thirteen Anniversaries in 1988, each following the same format as the original. These compositions are collectively referred to as the “Anniversaries.”

With rare exception (if any), Bernstein’s music explores character. From Fancy Free to West Side Story to Dybbuk, the music is meant not as abstract rumblings of rhythm, but as a reflection of the character that is the human element of the musical subject, which Jerome Robbins subsequently visualized. Gold here does the same. He’s cherry-picked 14 from among those 29 “Anniversaries” that best fit his concept of the flow of a dance, and the result is a suite of diverse images that are choreographically interesting and as distinct from each other as are the characters Bernstein celebrates. It’s also, whether intended or not, a tribute to Bernstein. And it’s a very appropriate way to recognize that this year is the celebration of Bernstein’s 100th Anniversary (a two-year event, beginning on August 25, 2017 and, carrying through his 100th year, ending on August 25, 2019), as last year was the celebration of Robbins’s Centennial. 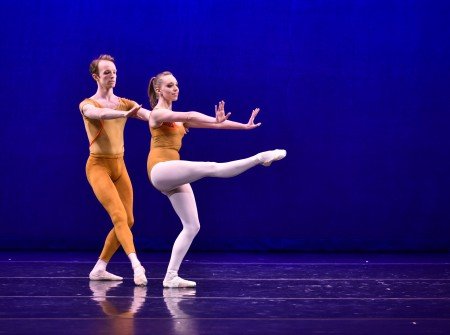 Performed by a cast of four, the piece carries the theme of “significant strangers” from brief movement to brief movement, using the music in each section to power Gold’s choreography of independent characters, or pairs, or groups, and in the process creating a stage landscape of miniatures that may be humorous one moment, sweet the next, and featuring characters that may be dominant or submissive, caring or uninterested, male or female. Describing each individual dance is virtually impossible because they were presented seamlessly; the only unifying choreographic factor for each is the quality of Gold’s choreography.

The only drawback to Sophisticated Strangers is that Bernstein’s music is not so much a celebration of birthdays as an occasion to reflect on how he sees the particular person’s character. So although the rhythm varies, there are few soaring melodies or attention-grabbing punctuations. For that reason, the dance can seem slow-paced (even though many movements are quite spirited). But that’s surface. If you see what Gold is doing, how his choreography differs from movement to movement no matter how brief, what you see is sophisticated choreography. Evelyn Kocak, Adriana Pierce, Michael Sean Breeden, and Michael Holden were the highly capable cast of dancers, and Joseph Liccardo provided the live piano accompaniment.

Gold created Counterpoint, a pas de deux which followed Sophisticated Strangers on this program, in 2017, and I saw it during that premiere engagement. I enjoyed it then, but it’s better now. Part of my modified opinion has to do with a change in costumes. Part also with a change in cast. And perhaps (though I’m not sure), part with a modification to the choreography. 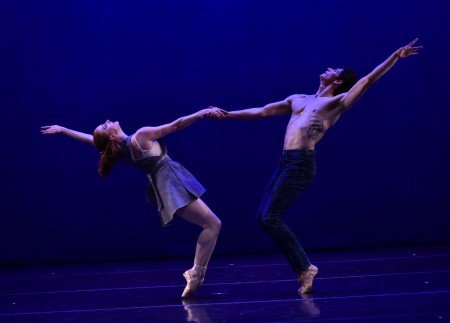 Choreographed to two compositions by Steve Reich (New York Counterpoint and Nagoya Marimbas), at its premiere the dance had an otherworldly feel, primarily a consequence of the very strange-looking costumes. Although the male dancer in the duet is still bare-chested, the costumes have now been replaced with new ones designed by Marlene Olson Hamm, and the sense of otherworldliness, which was a distraction, has disappeared. Even though the costume for the female half of the pair is still distinctive, it’s distinctive in a casual way, and it fits the piece far better.

As I observed two years ago, Counterpoint is one of Gold’s more interesting dances. It’s structured similarly to a classical grand pas de deux – except there’s more structural variety here than one might usually find. But it’s choreographic content rather than structure that makes this dance interesting, and it’s a more challenging piece to like because it’s relatively cerebral. That being said, the current incarnation looks less quirky than it did previously. Maybe in the intervening two years Gold subtly modified the choreography. More likely, however, is that the dance looked different because of a change of cast, with Abigail Mentzer and Barton Cowperthwaite assuming the roles, and with it, a change in counterpoint.

A graduate of the School of American Ballet and a former soloist with the Pennsylvania Ballet, Mentzer provided a solid, commanding and fiery execution, as well as a change in level of physical maturity (and I don’t mean that as a negative). It may have been less polished than what I’d seen at the dance’s premiere, but it was delivered with far more confidence and animation. Cowperthwaite, who joined the company last season, provided the unexpected counterpoint. Tall and lithe, Cowperthwaite sailed across the stage like liquid silver, and added far more grace, magnetism, and physical power to the role then I’d previously seen. A dancer with an eclectic background in ballet and contemporary dance, Cowperthwaite here owned the stage.

The evening’s final piece, Blind Revelry, is strange … because we don’t know what’s happening and why. But that strangeness is part of the piece’s charm. It’s also a cover for another interestingly structured example of ballet choreography that blends a sense of ballet tradition with a contemporary flair. 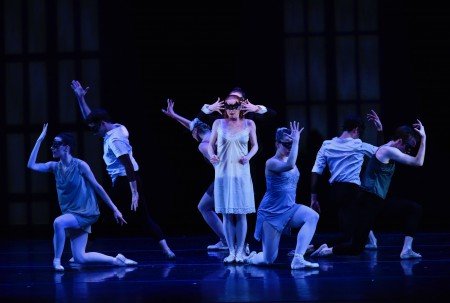 Blind Revelry is about … blind revelry. Literally. It’s a visualization of a party of sorts, in which the dancers are costumed in a variety of outfits, and there’s a central female character dressed in black. All wear masks that cover their eyes. Onto the scene appears a woman in white, without mask. Innocent … but at the same time curious about what this revelry is about. [An acolyte? A novice? A chosen one?), who eventually is convinced to / is required to / wants to don a mask as well.

That’s it. Well, not quite. There’s far more to this ballet than that flimsy semblance of a plot. Blind Revelry, which premiered last year at Boston’s Isabella Stewart Gardner Museum (and must have looked particularly intriguing in that museum/romantic context), has a pervasive atmosphere of mystery that comes with not really knowing what’s going on, but recognizing that not knowing is not significant. As I watched, I thought of Balanchine’s La Sonnambula and La Valse (though of course on a smaller scale), both of which are superb ballets, and both of which exude an air of mystery without any clear indication of why what’s happening is happening.

That Blind Revelry is a dance of mystery, however, isn’t nearly as important as the process, the structure, that Gold has created to tell this enigmatic story. Kocak, also a former soloist with Pennsylvania Ballet, is the woman in black (a cross between a mistress of ceremonies and a cult leader) and Mentzer is the woman in white. Whether they’re at stage center or not, the ballet swirls around them. Gold has the balance of cast (Breanne Coughlin, Kaila Feldpausch, Amy Holihan, Breeden, Cowperthwaite, and Holden) assemble as a sort of floating frame that highlights the action. Although this “frame” is a fairly constant presence, it’s not the kind of “frame” that might form a border for lead dancers. Here, the frame’s composition is porous and gap-filled, and changes during the course of the piece – dancers move in and out of it; brief solos and duets emerge from it and then retreat back into it (including the women in black and in white); and it may briefly collapse in order to surround and highlight one of more action foci.  It’s all very fluid, so you don’t necessarily notice its existence. But it’s there. And when I saw what Gold was doing structurally, and how skillfully he was doing it, I just sat back and smiled.

That exposition isn’t meant to, er, mask Gold’s choreography. It’s just that after awhile you get used to it being as varied, skillfully crafted, and interesting as it is. With Gold and his dancers, it’s a given.