In this age of increased gun violence, the Trump presidency and its associated discord, #metoo, and the desensitization caused by social media, Trainor Dance’s PAINT is a startling social commentary on herd mentality and behavior. A piece that can stand alone as a visually arresting and beautiful display of color, it is also a social experiment and quite a notable risk for a choreographer, and her performers, to take.

As audiences enter and mill around the empty art gallery, hostesses serving wine amidst a crowd adorned with plastic garbage bags and ponchos, a dancer in a white leotard and construction goggles perched on top of her head moves through a series of sculptural poses and meditations. With musicians playing softly in the corner, the familiar pretext of what it means to be at a gallery persists despite the plastic outerwear of the guests … and the fact that most of them are holding paint guns. 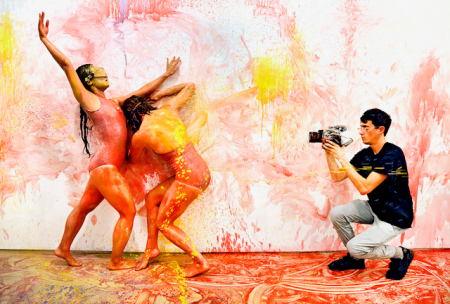 As more dancers enter and begin to move among the crowd, gently shifting and herding it, somewhere a gun goes off suddenly with a little hiss, bright yellow paint flying through the air, landing on the bare skin of a dancer. A twitter reverberates through the crowd – part nervousness, part excitement, part shock and curiosity. More paint shots are fired and the dancers now have paint on their exposed faces, in their hair, eyes, across their white leotards. I hear giggles as the man next to me offers his gun – he seems much too nervous to take part in this activity. Moments later, just as I am wondering who started shooting and if someone was placed in the crowd to start us off, a recorded message comes over the speakers – the instructions of the game. Each gun has a specific amount of paint. The audience can shoot the guns starting now. And once the last gun is emptied of color, the game ends.

And herein lies the shock, the most telling part of the experiment. With an almost zealous disregard and maniacal enthusiasm, completely unprompted, people shot at other people. Yes it was just paint, harmless and soft. Yes it was obviously the role of the audience to shoot the paint guns that were given to them, and yes it was clearly an integral part of this piece. But the fact that it all began without prompting, without knowing, is disturbing. As the dancers lowered their goggles, I got the sense that they were in that moment resorting to a more improvised structure than perhaps they had planned.

With PAINT, it is choreographer and Artistic Director Caitlin Trainor’s intention to see how people will respond to the opportunity to unload paint guns, and it is interesting to note that, at first, most audience members shot at the dancers, not at the white walls or floor. Once the initial shot was fired, the collective nervousness quickly vanished and was replaced by collective cheerfulness as paint flew at a rapid pace and began to decorate the dancers in vibrant washes of color. Then, once the instructions were made manifest, everyone with a paint gun was delighted to shoot. And, I admit, it was delightful! It was delightful to look at the bodies moving around me, at the white walls and grey floor, and add my shock of yellow where it was missing: To design and create art in the moment as part of a larger piece of art that was unfolding around me, and also because of my contribution. The artist in me, and the child in me, celebrated the joy of it, the simple beauty of color unsullied from definite form. I reveled in the fun of splashing around with a paint gun, watching the dancers covered in paint, move and slide and slosh like sculptures come to life. 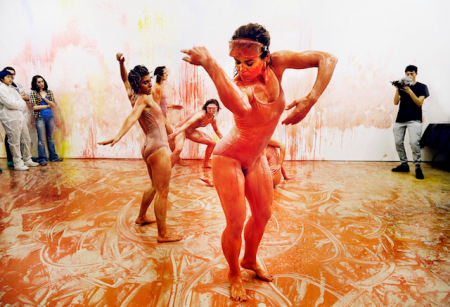 The dark underpinnings of the piece – the implications of predator and prey – are there, but one can choose to ignore them, distract oneself from the darkness with sensory pleasures – another metaphor for society in 2017, saturated daily with horrors on the news, horrors in schools and dance clubs and on the streets of our hometowns, and also saturated with ways to distance and distract from it.

Another disturbing, and in my mind telling moment, was when a young boy maybe 10 years old entered the gallery without a ticket, went right up to one of the performers, started break dancing, and then made a lewd gesture at her before being escorted out. This infuriated me and served as another example of PAINT’s original concept – apparently the social norms of conduct and behavior, the knowledge of time, place, and manner that as a teacher I see greatly lacking in today’s youth, are not as hardwired into people as one would perhaps hope.

Did this child and his older brother, who just watched in amusement, not know the proper way to act? Or were they just too self-absorbed in their own agenda to care? The same question could be asked of the overzealous shooters. Did they also not realize the implications of their actions or were they just too self-righteous to even think about it?  Those are the bigger questions PAINT leaves me with. Did the safety of the crowd make the initial shooter feel safe and anonymous, or would the same thing have happened in smaller numbers? Are we as a society headed down a dangerous path of self-absorption, narcissism, and a haughty disregard for consequences? Are we becoming more disconnected as technology advances and our exposure to violence increases?

These are the questions art conjures. This is the realm of art as social commentary, as provocation. It causes us to stop and think, question, evaluate, illuminate, and hopefully assimilate into the changes we seek to make, the path of evolution we are on. We get to choose whether that is a blind path or a conscious one. I left PAINT with a lot of questions and with the sense that as a society there is much work to be done. We can and should stop to appreciate the beauty around us, we can and should add to it, yet we also can and should to be conscious and responsible, with our eyes wide open.

I appreciate and commend Trainor and her dancers for the huge risk they took in putting their bodies and ideas out in such a vulnerable way with no control over the outcome. Committed and seasoned performers and beautiful movers, they demonstrate an ability to roll with the punches and stay true to an ideal. An important experiment, I would very much like to see this piece developed based on audience feedback and done in a variety of settings, reaching as many different people as possible.