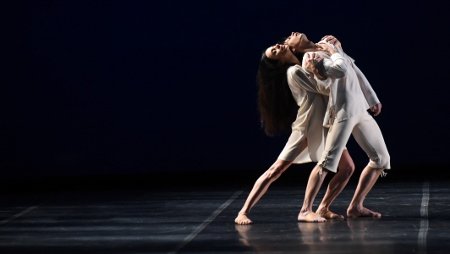 If you didn’t already know that Alessandra Ferri and Herman Cornejo were a couple, you would have after the concert, titled Trio ConcertDance, that they, together with pianist Bruce Levingston, presented at the Joyce Theater on Wednesday, the opening night of a six-performance run. The program presents as intimate a series of dances as one can imagine without being an invasion of privacy. I would have preferred more choreographic variety, but I cannot deny that seeing these enraptured dance virtuosi was nonetheless breathtaking to watch. And, after all, variety wasn’t the point.

This particular program has been around the block for a while, since Ferri and Cornejo connected during the course of the run of Martha Clarke’s Cheri, a theatrical/dance piece that I found dramatically wanting, but rewarding for the opportunity to see Ferri emerging from retirement to play what essentially appeared to be herself: a mature ballerina still able to move and emote like molten silver.

I’ve lived with Ferri, figuratively of course, for over thirty years, ever since picking her out of the corps in a Royal Ballet performance at the Met. You knew on sight the ballerina she could become, even though she was not individually featured. There was an almost hypnotic intensity about her, an aura, that set her apart. Her progression to becoming one of the world’s greatest ballerinas was meteoric thereafter – but there’s no need to elaborate; it’s common knowledge to anyone who might read this. Cornejo, of course, has been a highly respected principal dancer with American Ballet Theatre since 2003, with a well-deserved international reputation for dramatic intensity as well as artistic athleticism that avoids relying on superfluous ‘tricks’. The two of them together ignite the stage, and raise the theater temperature in the process.

Although the mood of all the duets is similar (these are passionate, romantic duets; period), the program was intelligently presented. There is a progression, from a dance picturing an awakening relationship to one that captures a more fully developed but still passionate one, and from the weakest of the dances both structurally and in terms of audience interest, to the strongest. 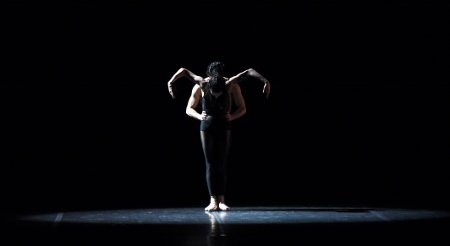 Flair, created by Demis Volpi, resident choreographer of the Stuttgart Ballet, to Ligeti’s Musica Ricercata No. 2, is a sensitive, slow-moving, heartfelt, and frankly, if it weren’t for the dancers, dull piece showing the couple initially atop and holding each other while on the stage floor in relative darkness, then rising, still in relative darkness, to face whatever it is that awaits them.

The piece is a ‘private light’ (the title of a ballet that Volpi previously generated for ABT) darkly revealing the outline of a relationship that showed no ‘flair’ whatsoever. Their next duet was Pavane, choreographed by Houston Ballet’s Artistic Director Stanton Welch to a Ravel composition unfortunately titled Pavane pour une infant defunte (Pavane for a Dead Princess). Although it’s somewhat more of the same, the dancers here are given choreography that is visually more animated and more interesting to watch – which I concede might just as easily have been the product of white, bright costumes as opposed to the black costumes in Flair, and lighting that permitted the viewer to see more than limited body outlines. Russell Maliphant’s Entwine further increased the choreographic quality, but provided essentially still more of the same, with the two lovers molding into each other like liquid corporeal streams that flow together and are eventually indistinguishable. Each of these ballets, with the possible exception of Flair, would have looked better highlighted individually in a more varied program, but that was not this program’s purpose.

The most entertaining, if not the most skillfully crafted, duet of the bunch, and the dance which closed the evening, is the pas de deux from Angelin Preljocaj’s Le Parc. Where the other pieces seemed peeks into the lovers’ private spaces, here the passion appeared to be a captured series of moments in an overall larger context: a display of profound affection meant to be shared unapologetically with anyone who happened by. This relatively familiar piece (to my knowledge the only one of the duets not specifically choreographed for them) reaches its culmination as Ferri cradles her arms around Cornejo’s neck and kisses him. Then, seemingly carried away by the passion and oblivious to anything but the passion, he spins her horizontally, with the power and speed of the generated centrifugal force gradually lifting her off the ground until she spins almost horizontally in the air, with nothing holding them together but her arms around his neck and their locked lips. The visual effect was like one of those amusement park rides featuring make-believe cars or airplanes lifted and spun around a central pillar, but this, of course, was considerably more dramatic, passionate, and human.

By far the more interesting pieces on the program are the solos sandwiched between the duets. Momentum, which Cornejo choreographed himself for himself (to Philip Glass’s Etude No. 16), is a miniature revelation of Cornejo at his best: controlled, precise, and like a lit container of dynamite, exploding with testosterone-imbued brilliance. Seeing his talent up close at the Joyce space was revelatory. A parallel display of intensity, but on the opposite side of the visual spectrum, is Ferri’s performance of Fang-Yi Sheu’s Senza Tempo. The music by J.S. Bach, Gottes Zeit ist die Allrbeste Zeit (God’s Time is the Very Best Time), a sacred cantata that sounds funereal but that is more solemnly spiritual than mournful, is converted by Ferri into a visual plumbing of the soul. There is no extraneous movement beyond simple walking or standing pointework, and moderated port de bras; if there are any explosions, they are within. Ferri still can command a stage, even when just standing on it.

Finally, I must recognize that this program was not a display of passion by two outstanding artists, but by three. Although the dances had a common thread, the only commonality among the pieces that Levingston played (those he performed between the dances, as well as the accompaniment to the dances themselves) was his exquisite piano playing. Unlike the way most of the choreography looked, each musical selection sounded unique, and I cannot pinpoint one piece that, in his hands, was superior to another. Like the dancing by Ferri and Cornejo, his musicianship was consistently sublime.