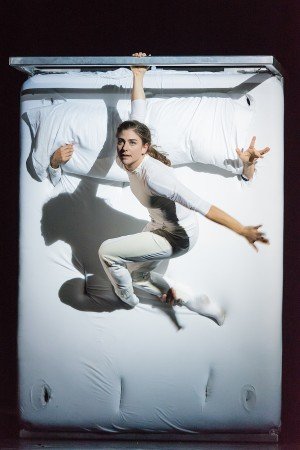 Québecois modern circus has made a big impact over the past three decades with Cirque du Soleil firing the starting gun. Since then other groups such as Cirque Eloise have created innovative theatre works combining circus, drama and dance. 7 Fingers had a major international hit with Traces, a collection of fine circus skills, rough and ready but effective movement, hung from a loose post-apocalypse narrative. The founders, Samuel Tétreault and Isabelle Chasse, tell us in the programme of their love of dance and theatre as well as acrobatics, and Triptyque brings these different forms together in the hands of three choreographers to provide a triple bill structure rather than a typical episodic modern circus show.

The resounding success is the final work, Nocturne by Marcos Morau, who brings together circus skills, choreography, surreal imagination and humour in a work that had me grinning with delight. As the title suggests this is a dream like creation, set on a black set with costumes and equipment in white, featuring a large bed and a young woman, Anne Plamondon, watching TV and sweeping around and over the bed in staccato movement as she listens to the world news. Slumber does not bring peace but a single, hesitant visitor, followed by figures appearing from under the bed. Morau finds intriguing shapes for the ensemble, sometimes like a snake, sometimes joining the woman in a circle on the bed with swinging arms and bodies – always visually interesting.

Nocturne uses a greater variety of circus skills than the other two works on show. Widely spread hanging ropes are intertwined, so that the performers fall together half way up and make eye-catching trios. The bed takes flight and swings around the stage with the dancers hanging on. And then it is upended on the floor facing us with the sleeper curled up, when hands appear through the mattress providing support for new moves as well as a funny, but unsettling images. A nightmare section with all the ensemble in fish heads is ended quickly with our heroine roughly pulling the fake heads off – wish my nightmares were so easily dismissed. After an anxiety sequence with elevated figures running furiously on the spot, we have expert manipulation of glass balls seemingly defying gravity – not only fascinating but according perfectly as part of a dream sequence. More peaceful slumber eventually comes with a man 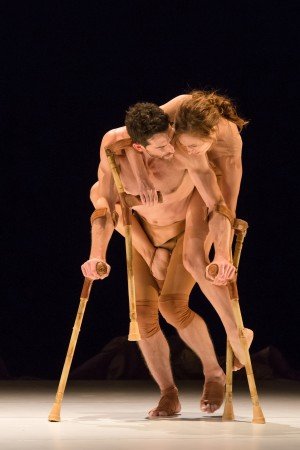 performing a handstand on a table, then spinning on an inset turntable in ever faster revolutions as the lights fall. Plamondon plays the central woman forever puzzled or alarmed at the strange occurrences, and is always worth watching for her sharp, precise moves.

Marie Chouinard’s Anne and Samuel for two dancers using crutches, features a fiercely sensual quality. Initially we see Anne Plamondon hanging from a bar in dim light with legs folded, tied up by a Japanese bondage expert. But this use of Kinbaku is only a prelude, as Samuel Tétreault soon brings her down and releases her, with none of the ritual repositioning and retying that is usually a feature of this Japanese form. Tétreault dominates the early encounters, as her saviour, but also simulating lifts with his teeth. However, the balance of power shifts and eventually it is Plamondon who asserts herself. The highly charged erotic encounters are enhanced by the crutches to give support to positions otherwise impossible, such as Plamondon running up and down Tétreault’s outstretched leg, braced at 45 degrees. The coupling culminates with Plamondon discarding her crutches and wrapping herself around Tétreault as they sit on a spinning turntable. There’s no question of the commitment of the performers and this study of obsession lingers in the mind.

The title of Victor Quijada’s Variation 9,81 refers to the acceleration due to gravity, and how strength and skill can hold it at bay. We first see the performers upended, supporting themselves on stands like elongated trumpet valves of differing heights, moved throughout the work to numerous fixing places. There’s no denying the skill of the artists balancing on their hands whether still or scissoring their legs. Back on the ground, 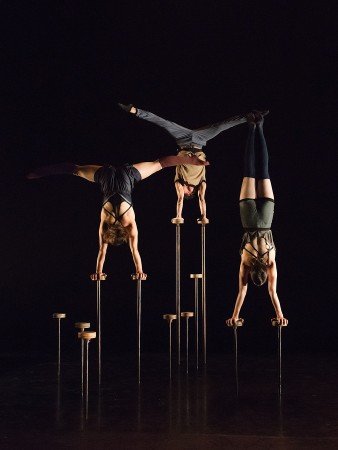 there is an atmosphere of unexplained apprehension as they move in generic contemporary dance moves and then we return to variations on the balancing. The problem being that in a 30 minute work this particular trick wears thin. However, in the final scenes, choreography comes more to the fore and Marie-Ève Dicaire and Geneviève Drolet weave elegant, synchronised shapes on top of their supports.

Overall Triptyque’s experiment of adopting a triple bill format for a circus / dance programme succeeds, principally due to Marcos Morau’s delicious Nocturne – I may have more fun in an auditorium this year, but if so, I’ll be fortunate.