New York’s City Center presented an evening devoted to choreography by Twyla Tharp, who recently celebrated her 80th birthday, which I saw at its opening night performance last Wednesday. Called “Twyla Now,” the program featured two rarely seen dances and two world premieres performed by some of the biggest names in the dance world. But the program’s real purpose, and the reason why so many ballet “stars” eagerly participated in it, is that it honored Twyla Tharp.

The evening, even with one piece that to me missed the mark, was a smashing success. I’ll consider the older (or “less new”) pieces first, then the premieres.

The program opened with Cornbread, which premiered at the Brooklyn Academy of Music in 2014. Tharp would have been 73 years of age at that time. At its premiere, it was one segment in a concert that featured a group of country / bluegrass singers called Carolina Chocolate Drops. In its original incarnation the dance was titled Cornbread Duets, and was then performed by New York City Ballet’s Tiler Peck and Robbie (then Robert) Fairchild. Regrettably, I didn’t see that program, and the choreography may have been modified since Cornbread Duets premiered. Regardless, while not the greatest of Tharp dances, as performed here by Peck and NYCB’s ubiquitous wunderkind, soloist Roman Mejia, it’s great fun. 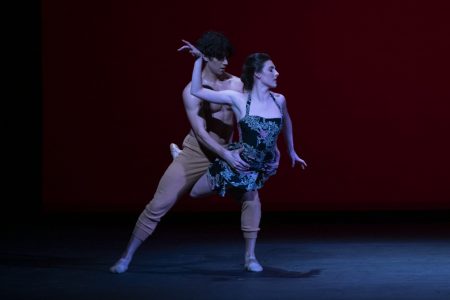 Essentially, Cornbread is a ballet pas de deux choreographed to country rather than classical music. It’s akin to similar solo and paired dances that amalgamate different dance styles with ballet [of those recently seen: Alexei Ratmansky’s Fandango (Spanish and ballet) – a solo for Mejia; and Jerome Robbins’s Other Dances (folk and ballet) come immediately to mind], here with addition of Tharp’s characteristic style. Although it’s not really anything new, it’s irresistible.

I’ve observed previously that a Peck/Mejia partnership doesn’t work as well as imagined pairings of each with other dancers, but of those I’ve seen Cornbread comes closest to showing greater compatibility and mutual stage interest. Peck and Mejia again appear as distinct entities, but here it works. Mejia succeeded in turning bumpkin into ballet, and was as magnetic a stage presence as he usually is, but to me this was more Peck’s show. Watching her apply her extraordinary sense of timing to the occasional stereotypical Tharp movement qualities, which she executed with the same spectacular aplomb that she applies to Balanchine, was alone worth the price of admission.

For this program, however, the audience got a twofer. Or maybe a threefer. NYCB’s Sara Mearns and Fairchild hit the ball out of the park in their outrageously brilliant and gender bending performances in Pergolesi.

Pergolesi has an interesting history. As the program note indicates, it premiered on November 27, 1992 at the Wexler Center for the Arts in Columbus, Ohio, but that doesn’t tell the full story. At its premiere, it was performed by Mikhail Baryshnikov and Tharp herself, and was then the second part of a three-part evening program called “Cutting Up” that featured Tharp and Baryshnikov. The piece itself was originally titled Bare Bones (choreographed to several pieces or excerpts therefrom by early 18th century Italian Baroque composer Giovanni Battista Pergolesi). It’s this piece that was subsequently “distilled” as a solo for Baryshnikov, titled Pergolesi, that premiered at a performance by the White Oak Dance Project in London in June, 1993, and that was subsequently performed at various locations in the U.S. [This information is taken from the Twyla Tharp Foundation website – where I also found that Tharp had choreographed a piece together with Robbins of which I previously was unaware, titled Brahms / Handel, that premiered in 1984. I haven’t seen it, and hope that somewhere down the road NYCB revives it.]

I suspect that the choreography was modified somewhat from the original Bare Bones to the solo Pergolesi, and then again to the duet titled Pergolesi that was performed as the third piece on this program, but, as is the case with Cornbread, that history is interesting but far less significant than the quality of this performance. 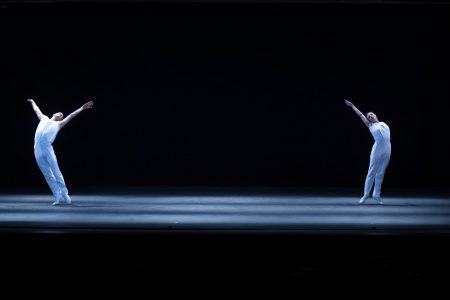 The novelty here was having Mearns dance Baryshnikov’s role, and Fairchild dance Tharp’s, with each maintaining intact the comparative styles, the recognizable role references, and the gentle one-upmanship that percolate throughout the piece. The original apparently successfully mixed both styles; this version scrambled them.

Mearns was not able to regurgitate the Baryshnikov solo exactly (I’ve seen a video of the solo, and a brief excerpt from Bare Bones), but that would have been virtually impossible, and was not what I suspect that Tharp expected. Rather, Mearns absorbed Baryshnikov’s role and made it her own, and was credible enough to be both authentic-looking and hilarious. Her performance here was one of her finest.

Even more impressive was Fairchild. His role required that he not only adopt the stereotypical Tharpian choreography that Tharp had performed (the shifting weight, the explosive directional shifts, the choreographic “asides” that make her choreography as endearing as it is accomplished), but that he also deliver it as Tharp would have danced it. Indications of the role’s female dance characteristics are subtle at first. Then, in one second, it comes out when Fairchild very deliberately (and knowingly) taps one of his feet gently onto the stage floor, as if he’d been wearing pointe shoes, before transitioning to the next choreographic phrase. That single motion was executed so perfectly, and so remindful of similar in-performance ballerina images, that it prompted knowing giggles from many in the audience. From that point, the female nature of Fairchild’s role exploded in body posture as well as movement quality. And when the dance ended with Fairchild suddenly pumping his fist as Tharp herself did in the original (referencing an identical and iconic image that concludes a masterpiece that she had choreographed six years earlier, In The Upper Room), the audience went wild.

I suspect that my take on Tharp’s two new dances is a minority opinion, but on multiple levels I enjoyed watching – experiencing is a better word – Second Duet, which was sandwiched between the two prior pieces, more than the expansive All In, which closed the program.

Second Duet had two casts. In the opening night program that I saw, the roles were performed by Jacquelin Harris and James Gilmer, both of whom have lengthy dance resumes and are currently with Alvin Ailey American Dance Theater. The second cast included American Ballet Theatre Principals Cassandra Trenary (replacing the originally cast Catherine Hurlin, who is injured) and Aran Bell.

Second Duet is another relationship dance. But that’s like saying that Robbins’s Other Dances is just another piano ballet. It’s different from other relationship dances on multiple levels: the nature of the visualized relationship, because it’s as dramatic as it is, and for its unusual (for Tharp) choreography – it looks nothing like any Tharp piece I’ve previously seen.

Effectively the piece consists of two related duets, with the second being the one that survives in the end, and that is indelible in a viewer’s mind.

The first segment is intentionally annoying, as the pair are reasonably accommodating and solicitous to each other, including relatively brief moments of somewhat arid intimacy and stunning-looking overhead lifts that require extraordinary strength from both of them. More significantly, however, the pair consistently assert and maintain their independence (particularly Harris). One scene of Harris playing a video game while Gilmer does something else (I don’t recall what it is) is priceless. At one point Harris and Gilmer are joined upstage by several musicians in part shadow, perhaps reflecting a passionless “evening out.

In the second duet the stage relationship between Harris and Gilmer changes. They’re now inseparable. Literally.  The choreography is extraordinarily physical: Harris and Gilmer roll around each other on and above the stage floor, including intricate looking partnering that makes it appear that the two are trying desperately to stay in contact with every inch of each other. 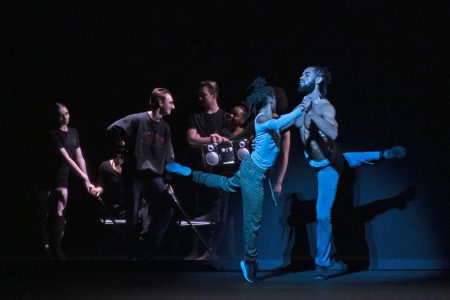 I can see why some viewers might think that the choreography for the second duet is overbaked. It is, but there’s obviously some purpose to it. Creating a dramatically schizophrenic and undeniably theatrical dance may be all that she intended, but perhaps Tharp is presenting the two extreme prongs of the relationship to make a point about the extremes inherent in all relationships, not that one is better than the other.

However, regardless of one’s emotional response or Tharp’s intent, the choreography for Second Duet doesn’t look like Tharp choreography, and it represents yet further choreographic development and variety coming from an 80 year old. Equally noteworthy is the extraordinary, apparently flawless, and emotionally overpowering execution by Harris and Gilmer. The second duet in Second Duet is so intense that the viewer necessarily detaches and becomes more voyeur than vicarious participant, but that’s a small sacrifice in comparison to the physical and emotional human qualities that Tharp, Harris and Gilmer depict here.

I would love to have been able to see Trenary and Bell (or Hurlin and Bell) dance Second Duet, partly because I suspect they’d bring different (not necessarily better or worse) individual qualities to the roles, and partly because I just want to see this moving and superbly choreographed duet again.

All In, on the other hand, moved me not at all – except to appreciate the individual talents of those involved. Choreographically, All In brings to mind multiple references to Tharp choreography that I’ve seen before, but without any coherence beyond these references to hold it all together. It looked like she just threw it “all in.” It may be that that’s the dance’s raison d’etre – sort of a summation of most everything that Tharp has created – but it looked too substantively flimsy for that.

There were, however, some highlights. The “star” dancers, at least in this piece, blended together – except for Trenary, who here danced with particular aggressiveness, confidence, and maturity.

In addition to including all the ballet stars who comprised the program’s “company,” Tharp added a group of young dancers in this piece (who reportedly were individually approached and recruited by Tharp after she saw them on the internet) of varying ages, backgrounds, and body types. Most of the time this ensemble was used as a background corps, but toward the end they took center stage, and promptly added a palpable sense of joy to what up to that point had been relatively lighthearted matter-of-fact. I hesitate to single out any of them individually, but there are two I recognized from YAGP, Brady Farrar and Savannah Kristich, each of whom excelled. They were joined here by Zoe Liebold, Jaiden Galan Roman, Alycia Williams, William Woodward (with understudies J’var Martin and Gabrielle Rembert), whose fine work spread the joy and made it contagious.

At the conclusion of All In I turned to my seatmate for the evening and described it as looking like a Tharp farewell. I hope that that’s not the case. Regardless, were her choreographic career suddenly, and prematurely, to end, I feel reasonably comfortable saying that she’s already choreographed more dances, ballets, Broadway shows, and movies, and received more awards and recognition than anyone else presently alive in the dance world.

But what sets Twyla Tharp apart is not just her quantitative output.

There are very few choreographers who are immediately identifiable by their first names alone. Indeed, I can think of only two. When I hear the name “Jerry,” it must be Jerome Robbins. The other is “Twyla.” Curiously, they have a lot in common, the most significant of which, to me, is the sense of humanity that’s reflected in most of their work and which, in addition to technique and invention, defines and distinguishes them. The roles she creates, for all their at-times quirkiness, seem real on a human rather than super-human or imaginary scale.

Among the many awards that Tharp has received I found one that appears particularly apt: the 2008 Jerome Robbins Award.