As much as I enjoy seeing anything created by Twyla Tharp, I wasn’t really looking forward to a program titled “Minimalism and Me.” I anticipated an evening filled with … minimalism, which I frequently find as entertaining and/or illuminating as watching paint dry. I should have known better. “Minimalism and Me” is not only both entertaining and illuminating, it’s almost thrilling. It’ll leave you with a smile permanently etched on your face – at least for two plus hours, and one doesn’t need to enjoy minimalism to appreciate it. Simply put, it’s entrancing theater, illuminating dance, and one of the most entertaining programs I’ve seen in New York this year.

Above all else, “Minimalism and Me” is a history of Tharp’s choreographic (and to some extent personal) evolution during the early years of her performing and choreographing career. And the key to it being as wonderful as it is is that the evolution is presented in the form of a time travelogue narrated by Tharp, with the biting wit that she’s known for aimed squarely at herself.

My first acquaintance with Tharp’s choreography came via the Joffrey Ballet (its New York/City Center incarnation). Deuce Coupe, choreographed to music by The Beach Boys, had its New York premiere in March, 1973, and I believe I saw it shortly thereafter. Aside from that dance’s entertainment value, which was off the charts, I recall thinking to myself as I watched it that it was created by someone with a computer mind; the intricate movement patterns that appeared to have no rhyme or reason (unlike, say, Balanchine) but somehow worked beautifully had to have been the product of a computer program or a mind that thought like one. And the ensuing As Time Goes By and Deuce Coupe II, although not quite as successful (or surprising), only reinforced that assessment.

Turns out, I wasn’t far wrong. 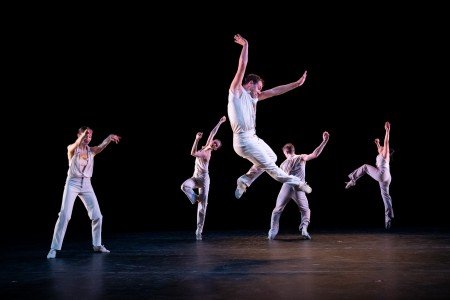 During the course of her presentation, Tharp displays her choreography at various early points in time both as produced by a real computer (albeit a prehistoric one), and as created and memorialized in her diagrams, which looked as if they’d been created by computer but did the job much more successfully. Many have seen choreographers’ creative diagrams of the placement of bodies on stage and the direction of movement, but rarely has anything looked quite so scientifically based.

But I digress.  As “Minimalism and Me” begins, and to the surprise of those in the audience who didn’t know it was coming, Tharp herself enters from the stage left wings and takes a position behind a lectern. Seconds later, she begins what is to be a history of her early evolution as an artist / choreographer, told via snippets from some of the many pieces she created from 1965-1971 and live performances. Tharp is intelligent enough to know that complete versions of these dances wouldn’t move the narrative ball forward, so excerpts are converted into examples that weave into her narrative. The entire production, from libretto to execution, is so accomplished (and just short of being overly slick) that I suspect it will, and certainly should, be memorialized in a more permanent form -perhaps a book/CD combination). 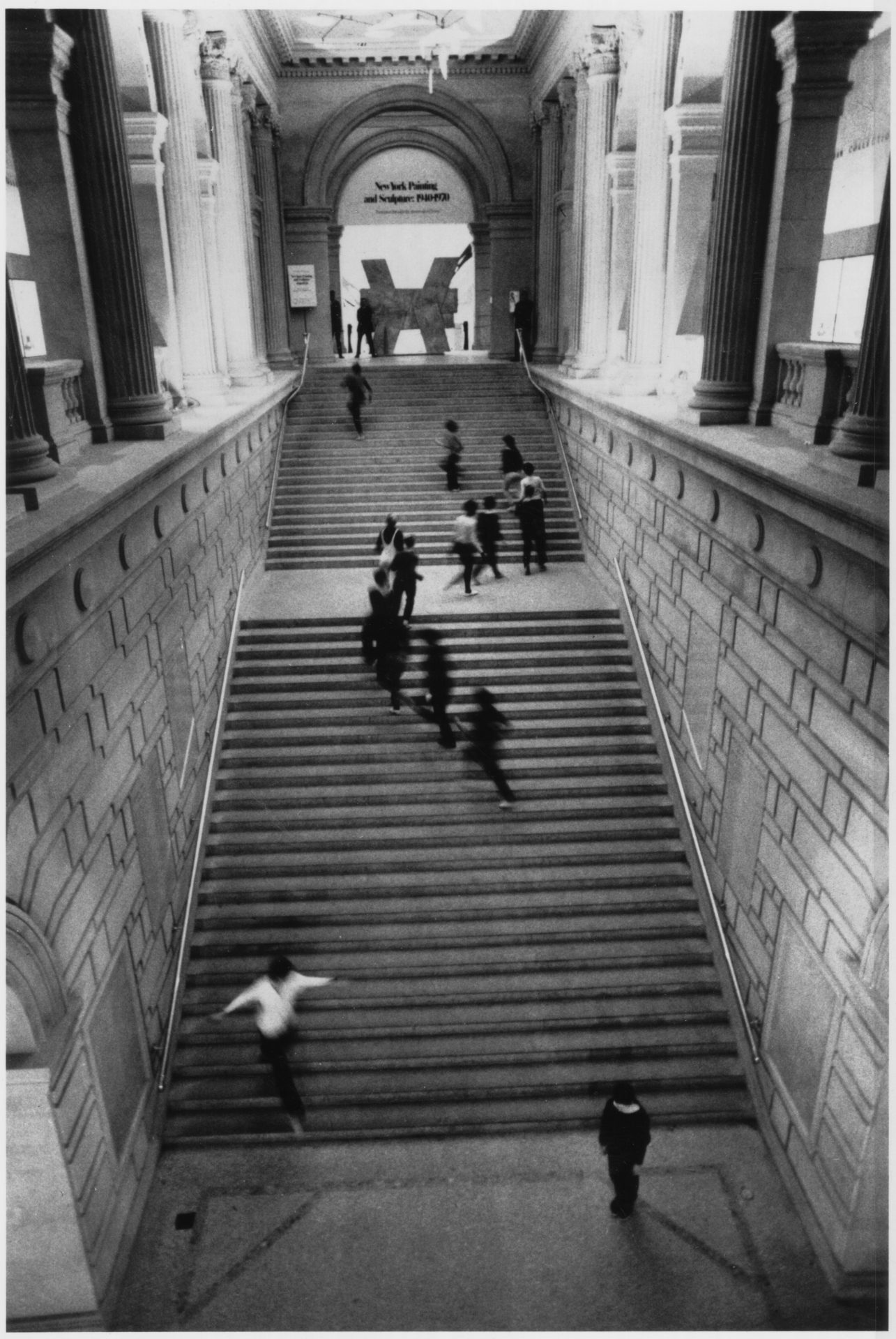 Twyla Tharp and Rose Marie Wright in a scene from “Dancing in the Streets of London and Paris, Continued in Stockholm and Sometimes Madrid,”
from “Minimalism and Me”
Photo by James Kravitz

Although I took extensive notes, there is no way to adequately replicate here that intelligence and wit, the pithy observations, the self-deprecation, and the nonchalant references to accomplishments that were interjected throughout Tharp’s narrative. It’s easier just to describe, in rough terms what the presentation looked like.

It begins with a photograph from one of her first performances, while she was thoroughly the minimalist revolutionary, which features her in a standing pose, aligned both vertically and horizontally to the floor at the same time – which was the artistic accomplishment. An excerpt from Tank Dive, which premiered in April, 1965, follows. Here, and in subsequent excerpts, Tharp enlists a group of 11 volunteers / dance students to act as an audience – and also to provide a critical counterpoint to the orthodoxy that Tharp’s movement then reflected. So in the Tank Dive excerpt, Kellie Drobnick replicates Tharp standing in second position, in releve, when the dance was performed at the Judson Memorial Church – the fulcrum around which post-modern, or post-post modern, dance turned. That’s it – for three or four long minutes – the length of the song that provided the piece’s musical accompaniment (Downtown, sung by Petula Clark, which has no relationship to the movement, such as it was, beyond being the most popular single in New York that month) – while the “audience” rebels at seeing one dancer standing in place with the only “movement” being her attempts to maintain her balance. 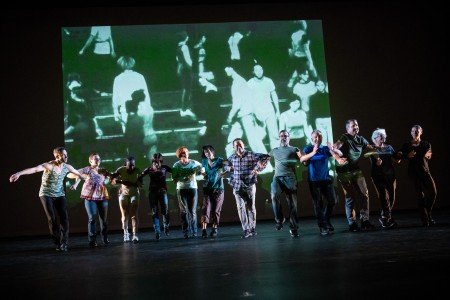 Recognizing that extreme minimalism, once movement has been eliminated, has nowhere else to go, Tharp gradually adds limited movement into her choreography, and recruits a company of women (eventually growing to six) who rehearse and perform wherever they can find space (rehearsal spaces and black box theaters did not then exist). Augmented with period photographs and fuzzy videos from the original performances, excerpts from Re-Moves (10/66), Disperse (4/67), and Generation (2/68; which was performed at the Wagner College gymnasium) follow, with Tharp’s movement vocabulary gradually growing (although initially parts of the movement were kept hidden from the viewing audience; part of the gestalt of being avant-garde). After After ‘Suite’ (2/69), included among a variety of presentations by modern dance companies at the Billy Rose Theater on Broadway (and as to which Tharp displayed a photograph of the contributing choreographers, including, among others, Martha Graham, Jose Limon, and Paul Taylor) and Medley (7/69), which was performed outdoors and produced the world’s first “flash mob” (except then, to my recollection, they were then called “happenings”), came Dancing in the Streets of London and Paris, Continued in Stockholm and Sometimes Madrid (11/69), which featured Tharp’s dancers performing dance “installations” long before that was considered fashionable. The dancelogue concluded with pieces that more thoroughly reflected her stereotypical movement quality, The Fugue (8/70), and The History of Up and Down (1/71).  Throughout, dancers with her current company performed the excerpts, sometimes with men dancing pieces created on the original company’s women (as Tharp explained, the dances were not gender-specific). 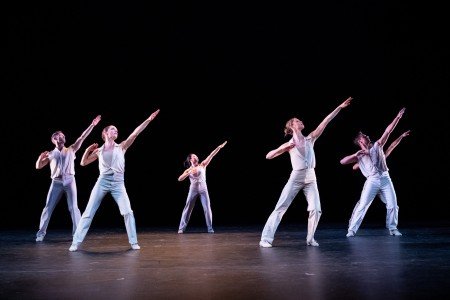 A full performance of Eight Jelly Rolls (9/71), a Tharp classic that I’d not previously seen, followed after intermission, danced by her full company (Matt Dibble, Ron Todorowski, Reed Tankersley, Kara Chan, Mary Beth Hansohn, and Drobnick). The choreography is fabulous, as are the dancers, and is marked by the sense of the impromptu (though there’s nothing impromptu about it), the humor, and the non-reverential sense of American culture that has been a hallmark of many of her pieces since.

Finally, as a grand coup de theatre, Tharp joined her company in a performance of an added encore of sorts to Eight Jelly Rolls in which the seventy-seven year old Tharp danced with the same energy level and enthusiasm as her dancers. I don’t know if this was special for opening night, or if it will be repeated throughout the run, but it brought the audience (including me, creaking bones and all) to its feet, astounded by – and not a little envious of – her still abundant and accomplished physical ability. 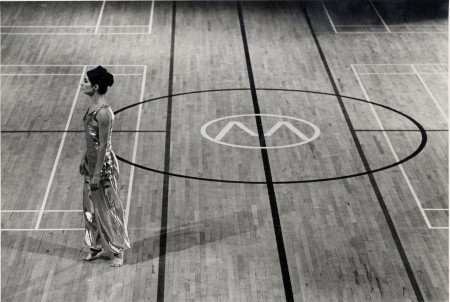 Twyla Tharp in “Generation,”
as presented in “Minimalism and Me”
Photo by Bob Propper

“Minimalism and Me” left me wanting still more. While one can see the evolution of her choreography from minimal to magical, the initial impetus for her idiosyncratic movement quality seems to have just “happened.” That may have been the case, but some more clear indication of that development, to the extent there was one, would have been instructive.  And taking the steps further, it would have been nice to have witnessed the genesis of Deuce Coup, considered the first crossover ballet, and perhaps of the dance that put Tharp on the map, Push Comes to Shove, which she created for American Ballet Theatre, considered one of the best of crossover ballets and which I witnessed at its premiere performance. [For those interested, much of the opening night audience at the Uris Theater had no idea what to expect, and sat bemused for much of the piece’s 22 plus minutes. But the staid ballet crowd eventually warmed to it, and erupted at its conclusion. Why ABT has not revived it in recent decades is incomprehensible; the company has adequate replacements for the original leads Mikhail Baryshnikov, Martine van Hamel, and Marianna Tcherkassky – several times over.] Lastly, with respect to the “Minimalism and Me” production as well, the piece looks so well-rehearsed and produced (it premiered in Chicago, and was here having its New York premiere) that it borders on being a bit too polished.

But those observations are insignificant in the face of the artistry and entertainment that Tharp here presents. It should be obvious that this is one of the finer dance events in New York this year, a great way to kick off the holidays, and a must-see for anyone interested in dance, in Tharp, or simply having a great evening’s entertainment. The engagement is a long one (through December 9), so there are no excuses. Don’t miss it.

Twyla Tharp: Still Creating After All These Years, Redux