So what’s a 76 year old to do after crafting some 160 performance pieces, including 129 dances, 4 full-length ballets, and 4 Broadway shows? Well, create a new dance, of course. And perform in another. And present one of the Joyce Theater’s finer programs. 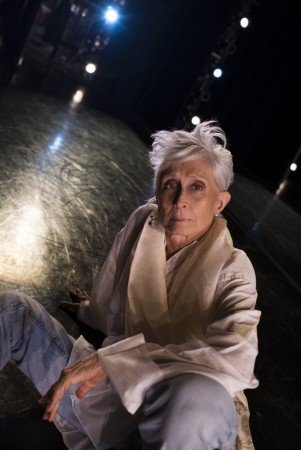 For its current three week engagement, and utilizing the formula she used in her Joyce program last year, Tharp and her company of seven dancers are presenting a mini-overview of her work, including one world premiere, two major revivals, and, at least at the program I saw, an unannounced addition: excerpts from a piece she presented earlier this year. As was evident last year, she’s still creating. And with Twyla Tharp, the hits just keep on coming.

Before discussing the dances themselves, I must initially salute the company’s dancers. They’re an extraordinary group, both individually and collectively, and each seems to fill a particular physical and “stage persona” niche. Although at times one might be tempted to think that Tharp’s dances could be executed by well-trained automatons, these dancers – John Selya, Matthew Dibble, Reed Tankersley, Daniel Baker, Kaitlyn Gilliland, Kara Chan, and Kellie Drobnick – add their distinctive personalities to their precision execution of Tharp’s quirky and quicksilver choreography, and elevate the audience experience in the process.

Also elevating the audience experience were the lighting and costumes created for each dance by the consummate design artists, Jennifer Tipton and Santo Loquasto, each of whom has collaborated with Tharp since early in her career.

Since I suspect that Tharp’s choreographic style is familiar to anyone reading this, I see no need to provide details of her characteristic movement quality here. Suffice it to say that the backbone of each of her dances is a style that’s recognizably hers, not an anti-style that’s a reaction to some other style. And although it may come across as somewhat irreverent, it’s the irreverence of a sudden breeze. 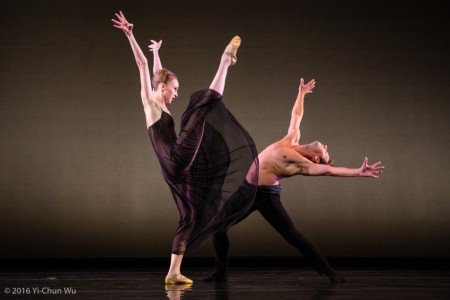 The program’s most eagerly anticipated piece was her newest, Dylan Love Songs. It’s serious fun, and although it takes its sensibility from the country / bluesy parameters of the seven selected songs, it’s also timeless and limitless, and as much a breath of fresh air now, in its own way, as her groundbreaking early creations.

Tharp took a crack at Bob Dylan’s songs previously, in The Times They Are A-Changin, a short-lived 2006 Broadway show – two years after her mega-hit to songs by Billy Joel, Movin’ Out – that was not well-received by critics and expired fairly quickly (although it apparently fared better earlier that year in San Francisco). I missed it, so I cannot say if there’s a connection between that production and this dance either choreographically or in component songs. But I can say that whatever may have been wrong with the earlier show is not evident in this dance.

If you were maybe expecting, from a dance titled Dylan Love Songs, an evening of romantic songs with choreography to match, think again. There are a few exceptions (Lovesick, I Want You), but most of the songs selected don’t sound like stereotypical love songs (granted, though, that little of Dylan’s oeuvre can be considered stereotypical anything), and none are what one might consider romantic. There’s no Lay, Lady, Lay, for example, or even Don’t Think Twice It’s Alright. For these reasons, the thought occurred to me that maybe the title of the dance simply begs the question: love of what?

However, there’s an interesting common thread – the presence of Selya meandering though most (if not all) of the dances wearing a black cape and black hat that seems to grow in size like Pinocchio’s nose and at times conceals his face. Initially, the sense is mysterious, a little Drosselmeyer-ish; a little Svengali-ish; a lot strange old man (at times walking with a cane). Why this particular visage? And why does he seem feeble at one point; energized at another? But as the piece progresses, he becomes more of a combination director and observer; sage and celebrant: a Dylan surrogate meandering through the dances … like a rolling stone.

Given this, perhaps the dance is “about” (if it’s about anything in particular) the “love” of time passing, of uncertainty, of change – and of change being something to embrace. Whether that’s the case or not, Selya’s role is as much a force as it is a character, and it takes the dance to a different level: from exciting choreography to music that one might not think could be danceable, to a work of dance art that has a message – even though I can’t be certain exactly what that message is. 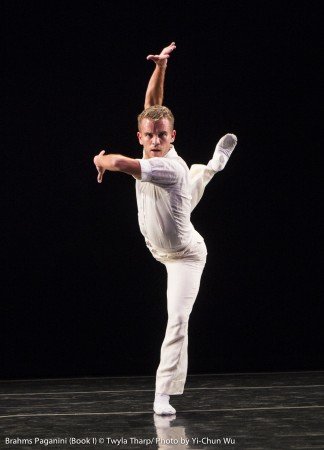 Reed Tankersley of Twyla Tharp Dance,
here in “Variations on a Theme by Paganini”
Photo by Yi-Chun Wu

To me, the best segments are those to I Want You, Shelter From the Storm, and the final dance, Jokerman – again, to me, a reference to Dylan himself. But it’s all good. And although no one dancer is more praiseworthy than another, I must note that Tankersley danced with astonishing command and presence. The cast was completed by Dibble, Chan, Gilliland, and Rika Okamoto.

The Raggedy Dances, a 1972 piece that opened the program, is anything but what the word “raggedy” normally connotes. Even though it doesn’t have the same scope as her break-out crossover ballet Deuce Coup, which was next on Tharp’s choreographic timeline, it has the same lightheartedness, the same sense of programmed zaniness, the same experimentation, and the same sense of seeing movement in a different way. It would be difficult to mistake this for a dance by anyone other than Tharp.

That the disparate elements of The Rageddy Dances fit together as well as they do is perhaps the most remarkable quality of this remarkable suite of dances.  And perhaps there’s a reason for this beyond Tharp’s skill as a choreographer – her undeniable intellectualism. I sense a common denominator, simplistic though it may seem, that ties the ragtime music of Scott Joplin, Charles Luckeyth (Lucky) Roberts, and William Bolcom together with the piece by Mozart. They’re all, in a sense, derived from what may be considered ‘folk” songs.

Ragtime, which got its name from the “ragged” sound of syncopation, has many roots in African-American music, which in turn has roots in European step dance forms such as the jig. [Save your letters – I know things are more complex than that.] And to a large extent dance forms such as the jig have roots in folk music. The Mozart composition that Tharp uses, Variations in C Major, KV 265, has its very obvious roots in folk songs as well: the French folk song Ah Vous Dirai-je, Maman. Although the melody is familiar (Twinkle, Twinkle Little Star, Baa Baa Black Sheep, and others), Mozart plays with it the way ragtime composers play with the underlying melodies in their music, creating something related, but different. And although I couldn’t detect evidence of syncopation in the Mozart, the variations he composed to the traditional melody take that melody in new directions. One can almost visualize Mozart dancing a jig to several of these variations – and the dances that Tharp created to the Mozart music flow seamlessly from the ragtime.  So perhaps Tharp put them together to demonstrate the connection between these seemingly unrelated and incompatible musical genres – and perhaps also to illustrate that her on choreography has evolved from seemingly disparate dance roots. Just a thought. 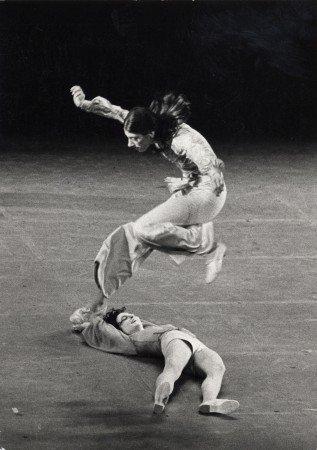 Be that as it may, the dance is always delightful. Baker, Drobnick, Gilliland, Chan and Dibble were the magic-making dancers. And the skilled piano play of Joseph Mohan, who performed live, complemented and enhanced the other components of the dance.

My understanding is that this presentation is the first revival of The Raggedy Dances since its 1972 premiere. It was staged by two Tharp dancers who performed in the piece then (Sara Rudner, Rose Marie Wright), and another, Okamoto, who began to dance with the company in 1993. Their efforts merit kudos not only because the result looks as good as it does, but also for preserving the dance for future audiences.

Although it reportedly derives its form from Bach’s The Musical Offering, The Fugue is a study in movement that creates its own music form from the sound of the dancers on stage. Created in 1970, it has much in common with Jerome Robbins’s “silent ballet” Moves, which he created in 1959 for his own company, Ballets: USA for the Spoleto Festival, and which New York City Ballet premiered in 1984. Both rely on the sound created by the dancers – and perfect timing. Tharp’s piece is a bit more explicit in that respect (the sound of feet pounding on the stage floor, and of Tankersley setting the pace by slapping his hand against his thigh). The greatest difference between the two, however, is that The Fugue isn’t ballet, and doesn’t have a semblance of a narrative.

The Fugue marks an important step in the evolution of Tharp’s choreography, and it’s unquestionably a superb, and intriguing, study of movement in silence. But although I find such pieces interesting and unusual, I don’t find them particularly entertaining to watch. Be that as it may, Chan, Gilliland, and Tankersley executed brilliantly.

Entrâ’Acte, the surprise bonus piece, consists of excerpts from a “demonstration” series of programs that Tharp presented last spring at The Harlem School of The Arts, titled Twyla at Black Box. Like everything else on this program, it was great fun. It looks like a random assortment of class demonstrations and commentary, but, like Tharp’s choreography, it’s hardly random. And it provided the opportunity to hear Tharp’s commentary (still sharp as a tack), to see her dance (more nimble than people half her age), and to see her still creating after all these years.

Twyla Tharp Dance will present this program at the Joyce through October 8. It’s a must see.

Twyla Tharp: Still Creating After All These Years