The first time I saw Twyla Tharp’s choreography was at a Joffrey Ballet performance at City Center in March, 1973: the legendary “first crossover” ballet, Deuce Coupe. A few months later, she created another crossover ballet for the Joffrey: As Time Goes By. I recall admiring both dances, as well as the iconoclasm and computer mind (back then, computers were unusual enough to be descriptive adjectives) of their creator. But even though she’d been choreographing since 1965 (primarily for her own company), and despite the rave reviews for Deuce Coupe, she didn’t “arrive” until Push Comes to Shove premiered with American Ballet Theatre in January, 1976 at the then relatively new Uris Theater (now the Gershwin Theater). I remember that premiere performance well, and that the more conservative ABT regulars at first didn’t know what to make of it, and crossed their arms or sat on their hands. But by its end, many gave it a standing ovation – long before ABT standing ovations became de rigueur.

This year, Tharp is celebrating 50 years of choreographic creativity, which included a special presentation sponsored by the Joyce at the David H. Koch Theater last fall. Now she and her company have a two week residency at the Joyce itself. I did not have an opportunity to see the Koch performances, but based on the Joyce program, Twyla Tharp and Three Dances, she has created dances that have enduring artistic value, and hasn’t stopped creating dances of genius. 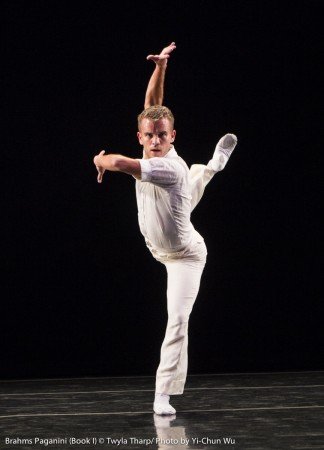 And as much as the choreography on display is stellar, her dancers are as well. Indeed, the program might just as well have been titled “Twyla Tharp and Nine Dancers”. Each one of them left vivid impressions – and Kaitlyn Gilliland, who joined the company for this 50th Anniversary season, is a particular marvel.

Beethoven Opus 130, which premiered on June 30 in Saratoga, is a haunting, cerebral, and tumultuous dance. One may not understand what Tharp is doing or why she’s choreographed as she has every step of the way (with Tharp, I usually don’t), but it has an unmistakable overall theme, and is non-stop entertaining from beginning to end.

At least on the surface, Beethoven Opus 130 (his String Quartet No. 13 in B-flat major) reflects the twilight of a performing career. It was choreographed for Matthew Dibble, who is nearing that point (though you wouldn’t know it from his performance). As it begins Dibble is seen as the central figure, perhaps the leading dancer among a group of six other dancers. Then, gradually, he’s no longer the alpha dancer ballerinas prefer to dance with, and other male dancers push him out of the way. He can still “do it”, but it seems more of an effort. Eventually, as his performing colleagues abandon him (or simply disappear from view), he’s left staring into space, at his past, or his future, or both. 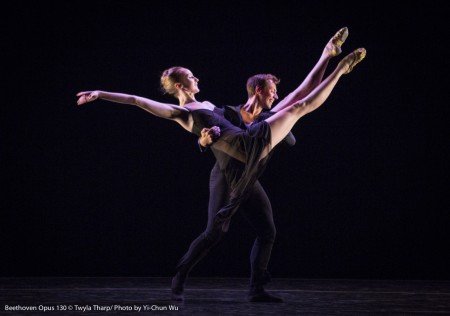 But that doesn’t tell the half of it. That the piece has a theme, whatever that is, may be helpful, but its movement quality, presentation, and execution is what makes it more than a glorified cliché. And in Beethoven Opus 130, there’s never a dull moment because so much of it is simply thrilling to watch.

The staging is constantly varied, with no orthodox relative positions on the stage. There never is in a Tharp piece. Everyone moves all the time, but it never looks forced or busy. And although there is no pointe work, the dancing is primarily ballet, not just scattered ballet steps added for variety or effect. Gilliland, a former member of New York City Ballet, is the ballerina she was and still is; Dibble, formerly with the Royal Ballet, is the danseur few knew. (Each of the company’s dancers has significant ballet performing background, as, of course, does Tharp.) 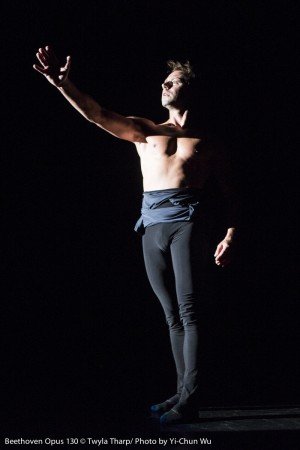 And the dance is filled with compelling visual images that linger in the memory far longer than its theme. For example, the dancers are costumed in black – simple shorts and tops for the women; slacks and shirts or T-shirts for the men. (The costumes were designed by Norma Kamali.) After the initial segment of the piece, Gilliland enters clad differently – in a black leotard and a long skirt made of a mesh-like fabric that, though possibly black as well, looks dark grey. The contrasting shades and skirt fabric make her appear ethereal; a vision – which perhaps is what she is in Dibble’s memory.

Dibble and Gilliland initially are the central partnership – clearly a ballet partnership, adapted for a dance without toe shoes. Suddenly, a bare-chested younger-looking male dancer appears (Nicholas Coppula, who had danced earlier in the piece with his shirt on), and Gilliland, perhaps impressed by his youth and virility, is swept off her feet. Literally. (Although they don’t look at all alike, I saw Coppula, and his execution and attitude brought to mind the late Alexander Godunov early in his ABT career.) It’s a compelling sequence that adds passion to the sensuality already evident in Gilliland’s character, and even though it doesn’t last long, it begins a change in dynamics that the piece roughly follows thereafter. That it ends with Dibble shirtless as well, for reasons that elude me, doesn’t matter.

But perhaps most impressive is that it’s not just “about” Dibble, or “about” a choreographer at the twilight of her career, or “about” any individual. Its sense of accomplishment, success, abandonment, and loss are universal. And with the gloss of controlled creativity and brilliant execution, Beethoven Opus 130 is one of the most impressive new dances to be performed in New York in 2016. 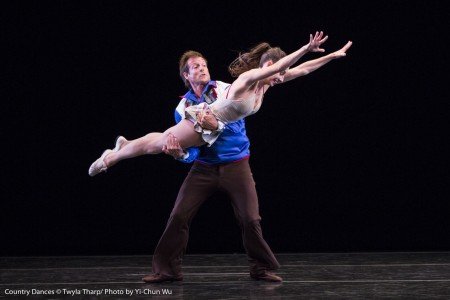 Country Dances, which opened the program, is a fluid series of dances to seven country songs that might be completely unfamiliar to people without strong country roots (e.g., Texas Quickstep, Rat Cheese Under the Hill, Cacklin Hen and a Rooster Too) sung by equally unfamiliar groups (e.g., The Hired Hands, The Skillet Lickers, The Kessinger Brothers). But that lack of familiarity adds to the charm of the piece. Created in 1976, Country Dances very much reflects Tharp’s distinctive choreographic style at that time, as well as her singular ability to fuse songs and sounds together and create movement that both enhances and reflects the music of that particular time and place – as she did so well with other music of other times and places (Deuce Coupe, Movin’ Out, Sinatra Suite). Periodically one can see images that echo Push Comes to Shove, As Time Goes By, and that would later populate In The Upper Room – ballet steps that suddenly become “slinky” “slouchy” casual, as if the rigid bodies suddenly lose whatever force was required to keep them uplifted, as well as the characteristic parallel arm swings that pull the body back and concurrently propel it forward. 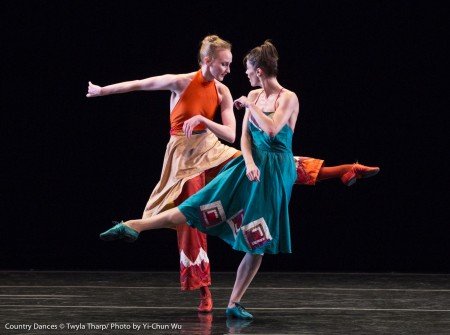 But it’s not a carbon copy of any of these other dances, nor is it dependent on that particular style. Country Dances stands on its own as a light-hearted take-off on square dance form, mostly without the squares, and a breath of fresh country air. Equally important are the costumes (by Santo Loquasto), which paint a picture that expands the country “take-off”. It’s a blast.

What makes it even more of a blast are the four dancers who light up the stage. John Selya, the sole male, has the enviable obligation to dance with each of the three women in the piece, as well as his own solos, and the former ABT dancer shines through all of it. Amy Ruggiero, with an abundance of spunk and a killer smile, and Eva Trapp, who adds cheerful country elegance, are top notch dancers. 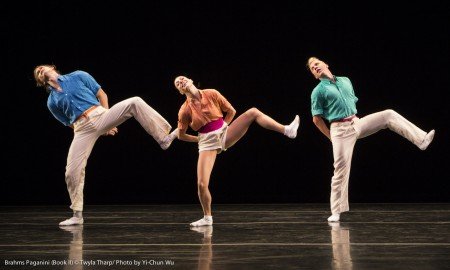 But Gilliland steals it seemingly without trying. Abetted by a costume that looks pasted together from odd swatches of leftover cloth that makes it resemble some odd country quilt, and choreography that looks somewhat out of control, Gilliland looks and dances “odd”, but the kind of “odd” that makes her character endearing. And she plays it deadpan hilarious most of the time – except for those singular moments when she’s dancing with Selya, and softly rests her head on his chest. It’s delightful, and it’s a gem.

Where Country Dances is delightful and Beethoven Opus 130 is cerebral, Brahms Paganini, created in 1980, is simply exciting. Choreographed to Books I and II of Brahms’s Variations on a Theme by Paganini, Opus 35, the piece is divided, not surprisingly, into two parts. Like the music, the parts are similar but not identical. In Book I, Reed Tankersley, costumed in white (costumes by Ralph Lauren), delivers a tour de force solo performance that whips the audience into an appreciative frenzy. In Book II, Tharp initially uses four dancers (Daniel Baker, Ramona Kelley, Ruggiero, and Coppula) to execute the rapid-fire footwork, but Gilliland joins the group and dominates the action thereafter. Also dressed in white, she’s the analogue of Tankersley in Book I, and her performance is equally extraordinary. 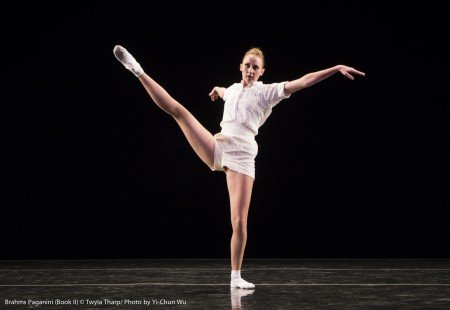 Some say that Tharp may have been iconoclastic in the past, but her work is no longer “cutting edge”. That may be true. But it’s also irrelevant. “Cutting edge” is an ever-changing concept. In the long run, it’s quality that counts, and this program demonstrates Tharp’s lasting creative quality. But there is one thing that has changed over time. At the beginning of this review, I noted that my initial impression of Tharp was that she had a computer mind. The “computer mind” has now come full circle: if you mistype her name, Autocorrect suggests “Twyla”. In effect, Tharp is now on the computer’s mind – as well as that of anyone interested in superb dances created over the past 50 years.

Twyla Tharp: Still Creating After All These Years, Redux