Having lived in Japan over twenty years ago, I have a certain love for the beat of a taiko drum. There’s a magic in its sounds, from deep resonating booms to sharp taps. Seeing a performance that combines taiko and dance was too intriguing to me to miss, and I’m glad I checked it out. Unit Souzou is co-directed by husband and wife pair Michelle Fujii, a fourth generation Japanese-American woman, and her Japanese-born husband Toru Watanabe. The couple met in Japan when Fujii was on a fellowship studying traditional Japanese folk dance and they now live in Portland, Oregon. The work they presented, 88: Hachi Hachi, was more than simply creative. It was deeply personal and contemplative, rich with ideas and imagery. 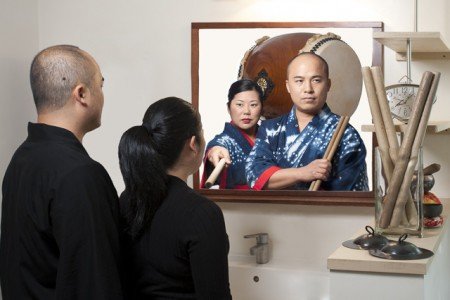 In Japanese, the number 8 is pronounced “hachi.” Among other things, if you place two eights side by side, you have a single number formed by two figures, and each figure, turned on its side, represents infinity. If this sounds complex, it is. There’s math involved! Another meaning of the title — Fujii and Watanabe married on August 8. The heart of 88: Hachi Hachi is, well, the heart.

Early in the work, one notices patterns. The performers walk in loops, forming invisible eights across the floor. In the beginning, Fujii and Watanabe wear yukata, traditional Japanese cotton robes that are often worn at Japanese festivals. In silence, they slowly engage with several taiko drums on the stage, gently touching the surfaces like one would caress the cheek of a lover. I felt as if the performers were both warming up and blessing the space.

Eventually they sit on stools and exchange hand gestures and a series of words. For example, “Can you hear me?” and “I just want to avoid conflict.” It’s clear the subject is the couple themselves and their marital relationship. Men and women sometimes talk past each other, and walk past each other, too, which Fujii and Watanabe do once they stand. They turn away but then face each other, with a drum in between like a small table. Each performer slides a hand across the drum, fingers scamper over the wooden side. They use the heel of the hands. They establish a rhythm.

Over time, their bodies become more involved and other drums are added. Their steps become bigger, bolder, and they weave around. Finally, they pick up drumsticks and the beats that follow sound like an argument. Indeed, Fujii and Watanabe incorporate verbal gripes, like who will take the dog for a walk. At a certain point, she moves separately, and then stands behind him. You can be married and be an independent individual at the same time, they seem to convey.

For the second half of 88: Hachi Hachi, the artists undress and wear dark tops and pants with a bit of a print. Watanabe sings in Japanese about walking through hardship and supporting each other, while Fujii adds English translations. A metronome is placed center stage. It reminded me of a shared heartbeat. During a community discussion after the performance, Fujii revealed that she studied classical music as a child, so the metronome was a strong childhood memory for her. Delving into childhood memories makes the work seem almost like psychotherapy. 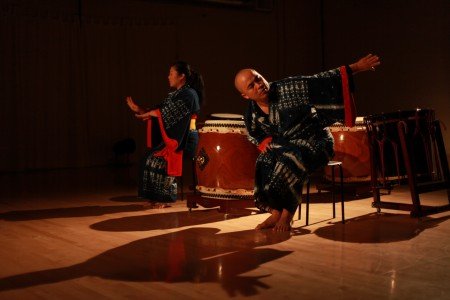 Playing taiko and dancing together obviously requires intense communication. Even in the moments of tension between the partners, the duet reflects intricacy and synchrony. As well, playing taiko requires real physicality. It was extremely interesting to see an instrument capable of such noise and vibration used in a work so intimate.

On the relationship journey that this innovative work conveys, the couple questions who will change, who understands, all while keeping up taiko beats. Aggressive hits to the drum by Watanabe express his frustration. Pent up anger is one way to use a drum! 88: Hachi Hachi is honest and raw and a lovely exploration of how listening is key to both playing the taiko and making a marriage last.