Urban Bush Women (UBW) has been around since 1984, and this innovative company dedicated to “weav[ing] contemporary dance, music, and text with the history, culture, and spiritual traditions of the African Diaspora” is still going strong. UBW’s recent work, Hair & Other Stories, choreographed by Associate Artistic Directors Chanon Judson and Samantha Speis in collaboration with company members, is purposefully provocative. Is it about hair? Yes, and no.

There’s certainly a lot to discuss when it comes to hair, and UBW introduces conversations about hair, in particular “nappy” hair (they take on this word directly) and efforts to tame it (or not). You can’t be duped into thinking the performance is solely about hair because a warning comes early that talking about hair provides a ticket to a journey elsewhere (the written program also states, “Don’t come here for no show: we’re goin’ on a Journey!”). It’s really the other stories and the elsewhere (the “beyond” as described by the dancers) that dominates this dance/theater piece. Hair simply serves to initially frame the discussion. As the work progresses, the strands of hair all but disappear in favor of attention to the broader issues of beauty, identity, and race. 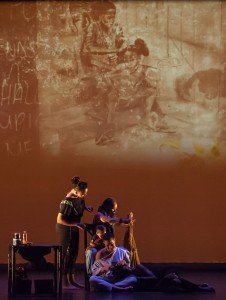 UBW in Hair & Other Stories, photo by Christopher Roesing

UBW’s company members are multi-talented, and this is necessary due to the nature of the work they do. They dance, of course, but they also talk, they challenge and engage. In the case of Tendayi Kuumba, she really belts out notes (in addition to being a dancer, she’s a singer/songwriter). Just as the dancers are called upon to do more than dance, the audience is called upon to do more than sit. In Hair & Other Stories, the audience is invited to join the performers on stage, but even those who elect to remain seated are asked to think and actively witness. Eradicating racism appears to be the admirable goal of the performance (UBW acknowledges that Hair & Other Stories is informed by its ongoing partnership and work with The People’s Institute for Survival and Beyond’s Understanding and Undoing Racism workshop).

Undoing racism is no easy task. Hair & Other Stories should be applauded for its efforts in that direction, for creating a safe space for dialogue. Because I’m a dance critic, I’m going to present some criticism, not of the subject matter, but of the performance. My perspective is, of course, influenced by the experiences I’ve had, and my own personal lens, which are intertwined with the color of my skin (white).

I’m certain that Hair & Other Stories, like most works of art, strikes different people differently, and that’s a good thing. There’s a lot to mull over. Many times my personal stories intersected with or diverged from the conversations at the forefront of the piece. The performers made it clear that discomfort might occur, and that it should be welcomed as part of the journey. 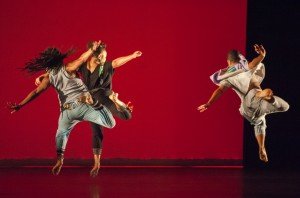 UBW in Hair & Other Stories, photo by Christopher Roesing

My criticism mainly centers on formal, structural elements of the composition itself. I wonder  how Hair & Other Stories would read with more editing and fewer theatrical devices. I appreciate combining dance with text, I’ve got no problem with singing or live film projections, or the use of a very adorable toddler on stage (the precious and precocious Aminata Mariama Balde Top, daughter of Speis). However, when extensive audience participation is thrown in, too, the narrative thread/message gets blurry. In addition, the work clocks in at well over two hours in length. There’s so much going on, I can’t adequately summarize what takes place. Via various tales, songs, screen projections, and physical movement, even some play with dolls, plus guided exercises on stage involving the audience, UBW’s performers reflect on race, history, hair, and more.

Another criticism — there’s simply not enough pure dancing for my dance critic soul. The dancers are magnetic. Hair and Other Stories has far too few moments of glorious dancing for my taste, but I realize that this is a choice. Nevertheless, I can’t help wishing for more dancing! Moreover, I wish the ending had completed the circle and somehow returned to the topic of hair, which didn’t happen. I left feeling generally hopeful and uplifted, but I’d have liked having the loose ends tied up.

Now that I’ve gotten those criticisms out of the way, I can zero in on what I liked most. Without a doubt, I was drawn to the vibrant performers. Judson, in particular, is beguiling. She’s both tender and tenacious. It’s hard not to want to watch her endlessly, whether she’s moving or standing still, sharing a story or staring ahead in silence. All of the dancers, though, have impressive stage presence, young Aminata included. (Although there’s “women” in UBW’s name, two men, Du’Bois A’Keen, and the fair-skinned redhead Ross Daniel were among the group for the Sunday afternoon DC performance co-presented by Dance Place and CityDance). 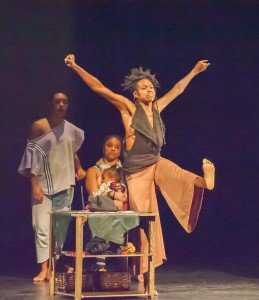 UBW in Hair & Other Stories, Chanon Judson in front, photo by Christopher Roesing

Furthermore, I really loved the costumes by DeeDee Gomes, a remarkable self-taught fashion and fiber artist based in New York. Her eclectic costumes for Hair & Other Stories could be an art exhibit. I longed to study them up close. Through patches of fabric and glitter, Gomes turned casual loungewear into striking artistic statements.

Finally, I enjoyed the heart and humor of Hair & Other Stories. The funny and serious moments both left lasting impressions. A long silky black skirt, worn over the head, becomes idealized smooth hair that blows in the wind. A young girl being chased with a hot comb suffers searing burns that an errant wiggle might have caused. Thanks to this performance, I can imagine the weight of carrying a lifetime of social messages about what kind of hair is desirable. Those messages are not about hair as much as they are about colorism (discrimination based on skin color), and that makes them all the more damaging. That Hair & Other Stories focuses on the dubious value we attach to hair type and skin color at the expense of our greater humanity is proper and profound, and the resulting meandering journey is worthwhile.