Urban Nutcracker, brainchild of retired ballet star and current dance educator Anthony Williams, is a hybrid of several performances.  A showcase for a variety of dance idioms, including hip-hop, flamenco, jazz, swing, and sophisticated tap, it’s also a retelling of the classic E.T.A. Hoffmann tale with lots of twists and modernizations.  Beyond that, it’s an opportunity to hear some of the Duke Ellington-Billy Strayhorn Nutcracker Suite played by a jazz combo. And, last, but definitely not least, it’s a classical ballet featuring two principal ballerinas who would grace any professional company in the world.  With tasteful choreography created by a team of dance makers as well as colorful costumes and sets with a retro vibe, Urban Nutcracker is a winning combination that certainly helps to make the season bright.

Perhaps the most noteworthy aspect of the show is that it’s not a low-budget traditional production.  This Nutcracker is completely reimagined, from the plot to the music to the character of the divertissements.  It also includes lots of delightful surprises, the first one being the appearance of a jazz combo that marches from the back of the house to the stage while playing a New Orleans second-line version of Tchaikovsky’s overture.  The combo was soon ensconced in a perch above the stage, and hearing their music (minimally amplified) was one of the great pleasures of Act I.  In Act II the frequent switching between the combo playing offstage, with much more aggressive amplification, and recordings of the original score was less successful.  I was told that one of Mr. Williams’s goals is to have more live and less recorded music in the future. 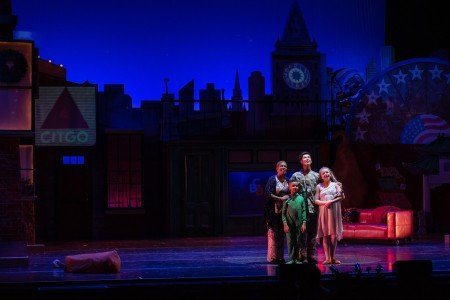 A second surprise came as a result of my not reading the program carefully.  In the Act I party scene I was immediately impressed by the actress playing the mother of the family.  Although she didn’t do much dancing, every gesture she made was so elegant and precisely placed that it struck me as luxurious casting to have such an accomplished performer in the part. 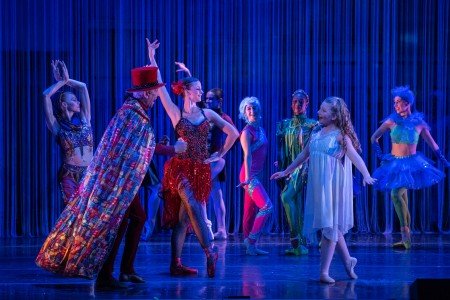 Then all of a sudden I realized who she was … Erika Lambe, whom I remembered seeing many times as a party guest or snow flake in the Boston Ballet Nutcracker when she was a company member from 1993 to 2005.  It was such a treat to see her onstage again.  In the party scene she often interacted with her mischievous onstage son (traditionally named Fritz, but here called Omar) who, as played by Marcus Colimon, was full of energy and enthusiasm; he’s definitely a young performer to watch.  The other junior stars, Stella Kotter (named Ruby this year in honor of Williams’s late aunt) and Echo Kirke-Sofer as Samantha, seemed to be ballerinas in the making. 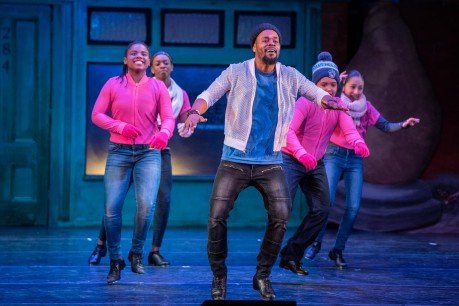 Other highlights included Khalid Hill, a tapper whose style seemed similar to that of Savion Glover, and indeed the program states that Hill was in the first national tour of Bring in ‘da Noise, Bring in ‘da Funk, Glover’s Broadway show of the 1990s.  Hill danced in an Act I face-off with hip-hop dancer Omar “Firelock” Thomas and in the “Tip-Tap Top of the Hub” construction-workers scene (set to Tchaikovsky’s Mother Ginger music).  Whenever he appeared, his footwork was rhythmically interesting, with his ability to travel on the tips of his toes being especially thrilling. 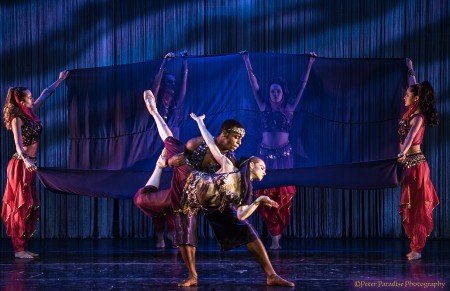 Guest artist Ruth Bronwen Whitney in the Arabian divertissement and Kseniya Melyukhina as the Sugar Plum Fairy, both of whom I saw in Midsummer Night’s Dream last June, are ballerinas of the first rank.  Melyukhina, who is a member of Williams’s City Ballet of Boston company, might have injected a bit more jazz into her variation, which was set to Ellington and Strayhorn’s “Sugar Rum Cherry,” but in the grand pas de deux (danced to the Tchaikovsky score) she could not have been more exquisite.  The move that stuck with me most was an astonishing, rock-solid balance that both punctuated the music and demonstrated her power as ruler of her domain.  If her dark-colored tutu decorated with what looked like city-building windows was any clue, that domain would seem to be firmly situated in the urban landscape. 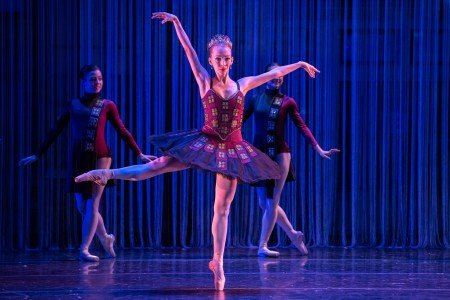 One feature of the choreography in the grand pas gave me pause, however.  Sugar Plum traditionally dances it with the Nutcracker cavalier, but here she interacted with two cavaliers and Drosselmeyer.  Since this sequence is set to some of the most romantic music Tchaikovsky ever wrote, one expects to see a love duet.  Inevitably, the intimacy implied by the music is vitiated when Sugar Plum has three partners. 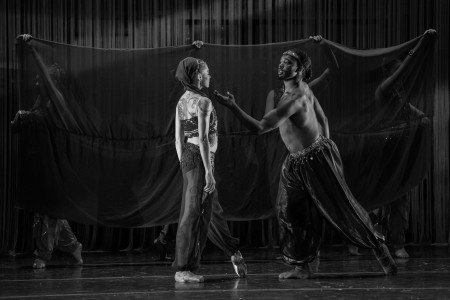 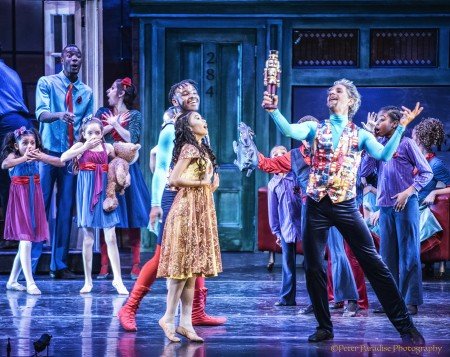 Keeping the whole show together was Gianni Di Marco as Drosselmeyer.  Frankly, I’m happy to watch him in anything he does.  As Bottom in Midsummer Night’s Dream, he achieved a nice balance of comedy and pathos.  In this production, decked out in a red top hat, he reminded one of Dr. Seuss’s immortal Cat in the Hat, who proclaimed, “It’s fun to have fun, but you have to know how.”  Di Marco knows how.  A selfless performer, he is not merely willing but downright eager to create all kinds of virtuosic silliness onstage for the sake of his audience and fellow cast members.  During his time at Boston Ballet he played Carabosse as a toweringly malevolent figure, and he brought the same kind of over-the-top energy and disciplined physicality to this role.  Urban Nutcracker is fortunate to have a character dancer of his distinction.  One wishes that Boston Ballet would invite him back the next time it needs someone to do Carabosse, Madge, a wicked stepsister, or similar role.  He is definitely the man for the job.

Take it for all in all, Urban Nutcracker is an enjoyable, entertaining, well-staged production that fulfills its mission of presenting diversity onstage while upholding high professional standards.  In its set projections it’s also a tribute to the city of Boston, and residents of the Hub – not to mention tourists – are bound to appreciate the compliment.