When the curtain went up on George Balanchine’s Symphony in C, it first generated an audible and wonderful intake of air and then applause from the audience, which was as smitten as I was with the sea of pure white tutus taking the stage — and the corps had not yet moved a muscle. But when they did, ah, magic.

While its current title has long been used, its original, Palais de Cristal, hews more closely to both the premise and clarity of this iconic masterwork. My own first viewing was in 1975, in its original version and at its original home — the Paris Opera Ballet, and I’ve been a big fan ever since. This is one of those ballets that you go out of your way to see, as I did when the San Francisco Ballet performed it at the outdoor summer festival venue of Stern Grove, where I cheerfully peeked and dodged from behind trees standing on a steep hill in order to enjoy it.

Now with a clear view of the stage, the Pacific Northwest Ballet (“PNB”) has rarely looked better. At the start of its 2016-17 season, the company looked fresh, well-rehearsed and eager to get on with the business of dancing. In four movements, each of the lead couples brought their “A” game: Lindsi Dec and Steven Loch in the bouncy first; Laura Tisserand and Karel Cruz in the regal and elegant adage of the second; Leta Biasucci and Matthew Renko in the petit allegro of the third; and Angelica Generosa and Price Suddarth joined by a total cast of 48 for the grand whipping zip of the concluding fourth. And that fourth! Its last two or so minutes glorious with a corps making quick tendus in multiple, changing directions, and then all men and women big sissonne jumps and that amazing tableau where the four principal women are all bent over to their left in port de bras and passé poses. 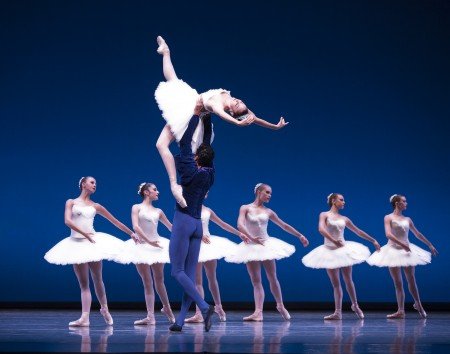 This ballet was danced cleanly, clearly, and with great sparkle, evenly, and with joy and wit. It’s almost hard to believe that the Bizet score was composed when he was only at the ripe old age of 17 and then forgotten until re-discovered in archives in the 1930s. How wonderful that Stravinsky brought it to Balanchine’s attention. For this I am ever grateful.

Too long out of PNB’s repertory [for about ten years, and having to do more with what were then unreasonable demands by the copyright/licensing owner as I recall, now deceased], Symphony in C is not only a great closer, it’s a great “rouser” — uplifting and enlightening, sending the audience out into the summer night stars.

The first two ballets of the evening were by Benjamin Millepied, hence the program’s moniker Tricolore, making reference to the French flag of blue, white, and red [in that order — “Le drapeau francais est bleu, blanc, et rouge.”]

Tisserand, accompanied and partnered by Miles Pertl, led the revival of 3 Movements, a work PNB commissioned from Millepied in 2008. I enjoyed seeing it again and found myself thinking this a ballet that’s better than its music by Steve Reich. The choreography is very well constructed and thought through, while the music itself goes in a linear and flat direction. It is very repetitive with little to no dynamics and is more atmospheric than anything. I’d love to see Millepied keep all the steps but change the music [which has and can be done with other ballets and dances].

The great Texas pianist Van Cliburn said that if he could create a perfect recital program, it would consist of three pieces: Beethoven’s piano sonata No. 23 in F minor, Op. 57; Opus 57; and yes, Opus 57. Clearly this guy’s favorite piece. Known as the Appassionata, Beethoven’s music was beautifully interpreted at the keyboard by pianist Allan Dameron and the work of the same name by Millepied sensitively danced by three couples on stage: Elle Macy with William Lin-Yee; Leah Merchant and Jerome Tisserand; and Elizabeth Murphy along with Cruz. 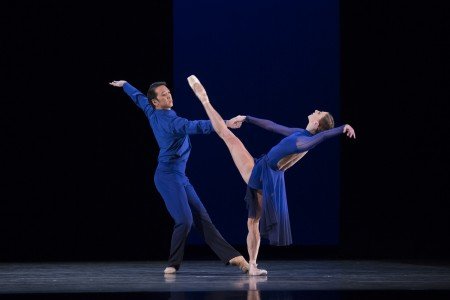 I was looking for the passion and found it in the dancing and in the structure of the concept and choreography. My only choreographic fuss was that there was too much running around, particularly during the last movement, which admittedly is longish and tempestuous. The late, great Loyce Houlton was firm in laying out her 10 Commandments for choreographic composition, and one of these was “Thou Shalt Not Run!” I would have liked to have seen some of Millepied’s good movement ideas perhaps developed, extended, and explored more.

I liked what, to me, were the obvious references to Jerome Robbins’ Dances at a Gathering and his In the Night, where we see a community and various stages of relationships enacted.

What worked less well for me were the costumes. The first part had the dancers in brightly colored jumpsuits and the women en pointe, and then they changed into more flowing garb, soft shoes, and the couples paired in white, black, and gray. While the choreographer himself said at a lecture that he felt this change was important for interest, I found it an unnecessary device, and a bit distracting, if not confusing.

The mighty PNB Orchestra was conducted by Emil de Cou for the first work, 3 Movements and for the glorious concluding Symphony in C. This was a program of pure white invention, passionate dancing, and magic.