It’s been nearly three decades since former Cleveland Ballet (predecessor company to the current Cleveland Ballet) co-founder Ian “Ernie” Horvath (1943-1990) lost his battle with AIDS at age 46. The life and career of this Cleveland native who danced with Joffrey Ballet, was chairman of Dance/USA, and was a pioneering advocate for those with AIDS, was honored in Cleveland-based Verb Ballets’ program, Dance Legacy: Celebrating the Life of Ian Horvath.

The program began with a trailer for the documentary that introduced Horvath to those in the audience unfamiliar with him. It also briefly described the evening’s opening dance, Horvath’s “Laura’s Women” (1974).  His earliest and most celebrated work, “Laura’s Women” was inspired by, and set to three songs by, late American singer/songwriter Laura Nyro (1947-1997). The modern dance trio about three differing personalities contained in one woman with a self-destructive past was staged by Verb’s artistic director Dr. Margaret Carlson, a former Cleveland Ballet dancer under Horvath.

While dated with regard to its soundtrack and movement language, “Laura’s Women” was nonetheless a masterful creation from an era from which seemingly few works survive in the repertory of dance companies today.  Nyro, who was critically acclaimed for her own recordings, also wrote the commercial hits “Eli’s Coming” popularized by Three Dog Night, “Wedding Bell Blues” recorded by The 5th Dimension and Barbra Streisand’s rendition of “Stoney End.”  The three songs of hers used in “Laura’s Women” (“Emmie,” “Poverty Train” and “Lonely Women”) reflect her sensitivity as a songstress to the human condition, especially concerning woman. These songs and their lyrics were as integral to the work’s heartfelt narrative as they were to Horvath’s choreography.

Danced with feeling by Kelly Korfhage, Christina Lindhout and Lieneke Matte, “Laura’s Women” was awash in emotion from hopefulness to hopelessness. It began in silence with Matte appearing onstage and launching into Horvath’s José Limón-esque choreography laced with image-evoking hand and arm gestures that suggested division. She was then joined by Lindhout and Korfhage who slipped in single file behind her through a rear stage curtain. The trio then split apart moving off to opposite areas of the stage, indicating a split in Matte’s stage persona.

Korfhage then set out on a sweeping and somewhat hopeful solo danced to Nyro’s song “Emmie”.  With its “Oo la, la, la, oo la, la, la, la” lyrics, the song, and Korfhage’s dancing, were the soothing calm before the storm that was Lindhout’s unhinged solo to “Poverty Train,” whose lyrics suggested a woman cursed by the devil and driven to prostitution by poverty. With long teased hair flying about, Lindhout aggressively swooped and swayed about the stage — her performance like a mini-tornado on a path toward its own destruction.

Beautifully-crafted and danced, “Laura’s Women” concluded with Matte performing a heart-wrenching solo to the song “Lonely Women” that ended with the three women lined up one behind the other again; Lindhout and Korfhage then slipping out the back curtain and leaving Matte in a final pose, head bowed, resigned to her desolation.

After more documentary excerpts, an all-male cast performed Horvath’s final work “No Dominion” (1988), staged by Pacific Northwest Ballet soloist Margaret Mullin, who is also the director and producer of the Horvath documentary. 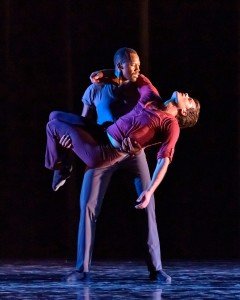 Originally created on The José Limón Dance Company, “No Dominion” was essentially Horvath’s farewell message and gift to the world. Created when he was dying of AIDS, the piece, set to music by Sir William Walton, was another touching statement on Horvath as a human being and dance maker. The work featured guest dancer Brandon Leffler portraying Horvath aware of his fate and surrounded by figures representing those he loved, some of whom were also lost to the disease.

Titled after the Dylan Thomas quote “…though lovers be lost love shall not; And death shall have no dominion,” the dance moved through vignettes in which Leffler was paired with several other dancers in partnering sequences that were as athletic as they were poignant.  Most piercing was a final duet with fellow guest dancer DeMarcus Suggs as a former lover of Horvath in which he lovingly cradled Leffler (as Horvath) in his arms as a chorus representing departed friends moved along the back of the stage toward a light indicating the hereafter and beckoning Leffler to follow.

The enriching program concluded with Kay Eichman’s “Mendelssohn Italian Symphony” (2018), the first ballet that Eichman, another of Horvath’s Cleveland Ballet dancers, has created for a professional dance company. Currently a ballet mistress at Cuyahoga Community College’s Creative Arts Academy in Cleveland, Eichman initially choreographed the first movement of the ballet on her student dancers. For Verb’s rendition she expanded the neo-classical ballet to three sections for four couples set to, and in response to, the first, second and fourth movements of the Mendelssohn’s “Symphony No. 4 in A Major, Op. 90” (Italian Symphony).

Despite having the word ballet in its moniker, Verb Ballets is better known for its repertoire of contemporary and modern dance works. As such, Eichman’s ballet, while performed adequately by Verb’s dancers, exposed their technical weaknesses in the style. Led by the company’s de facto ballerina Korfhage, formerly with Kansas City Ballet’s second company, Verb’s dancers navigated Eichman’s choreography with vigor and only a few bobbles. Full of familiar steps, movement phrases and dancer couplings seen in other ballets, Eichman’s “Mendelssohn Italian Symphony” nonetheless bubbled with enthusiasm and proved a spirited counterpoint to Horvath’s mostly melancholy works.