Recently hired Boston Ballet principal dancer Viktorina Kapitonova arrived in town just in time to perform in “Fancy Free” and “Glass Pieces,” two of the three Jerome Robbins works in the season opener, “Genius at Play.” Born in Russia, she trained in her native country and after dancing professionally with companies in Kazan and Moscow, spent almost a decade with Zürich Ballett. Currently she is preparing both the Sugar Plum Fairy and Dew Drop roles in Mikko Nissinen’s The Nutcracker, which is very different from the modernized version by Christian Spuck that she danced in Zürich. In fact, the Boston Ballet staging of E.T.A. Hoffman’s tale, with choreography based on Petipa and Ivanov, brings her back to her Russian roots. About two weeks before opening night, we chatted about her career as she looked forward to becoming part of Boston Ballet’s The Nutcracker, a lavish production whose sets, costumes, special effects, and live music make it a true holiday extravaganza.

Tell me about your training.

I was born in Cheboksary and started training a little bit late, at age 13. Normally, one begins at nine or 10 years old.  When I was five years old, my mom sent me to a school of the arts, where you go once or twice a week for instruction in painting, singing, dancing, and other activities. The teachers at the school noticed that I was talented and said it would be better to send me to a dance school. After searching for one, my parents found the Kazan Choreographic School in the nearby city of Kazan.

I went to that school for eight years. They have a big theatre in Kazan, and every year they do a Nureyev festival because Nureyev went there to conduct toward the end of his life. I started my professional career there and stayed for three and a half years. They sent me to study at the Bolshoi for a month to develop my technique, which was a great experience.

So you come out of the Bolshoi more than the Mariinsky tradition?

I wouldn’t say that. Of course, they’re a little bit different. My teacher, Davleeva Valentina, studied at the Vaganova School, and taught us Vaganova technique. I found that in Moscow the movement is more free and dramatic, not so conservative.

How did you end up in Zürich?

After I left Kazan, I went to the Stanislavsky Ballet [in Moscow] and worked there for a year. Then one of my friends left to find work in Europe and landed in Zürich. After a month he called me and suggested that I go there because at the time it was one of the best technical companies in Europe.  [Former artistic director] Heinz Spoerli offered me a principal contract, and I stayed for eight years.

While I was there I created many roles in classical, neoclassical, and contemporary ballets.  One of the highlights of my time in Zürich was working with Alexei Ratmansky to create the role of Odette-Odile for his reconstruction of Swan Lake.  Another was the Giselle I created with Patrice Bart coaching me [https://www.youtube.com/watch?v=f1w-oAdcG18]. I really liked working with him; he’s very precise, but he wants the movement to look natural. In Giselle I also had the amazing opportunity of dancing with Roberto Bolle. He gave me a lot of freedom and confidence. I knew he was there to support me in whatever I did.  Since this was only the second time I had performed Giselle, his support made a huge difference.

The acting you did in Giselle was really extraordinary. How did you develop the character?

The character of Giselle is so close to me as a person.  She is a simple girl from the countryside.  Her lightness and happiness came easily to me and helped build the drama of her devastation when she is betrayed as well as the heartbreak of her determination to save Albrecht in the last act. She is the character I identify with most in all of ballet.

Tell me about when Giselle, in her madness, pushes Albrecht out of her way. How did you come up with that detail?

It came from Patrice Bart. Giselle goes past him [Albrecht] and tries to understand where she is, but she doesn’t recognize the person in front of her.

Similarly, she pulls away from her mother.

Yes, she says to her mother, “Who are you? I don’t recognize you.”

What about that fall to the floor toward the end of the mad scene? I’ve never seen it done that way.

He [Patrice Bart] wanted Giselle to fall in the shape of a cross.

So she’s been crucified by the social forces arrayed against her.  That gives further resonance to the agony of her mental breakdown.  I also loved the shoulder bump that Albrecht gave Giselle at the beginning of Act I.  He completely revealed his character at that point – if only Giselle had understood him.

Patrice Bart wanted Albrecht to be a little bit brutal at that moment. The message is that he just wants to play, but she’s shy and doesn’t know how to behave. She’s a natural girl; she lives near the forest, loves the flowers, and believes a flower will tell her whether Albrecht loves her. She’s really naïve.

How did you end up in Boston?

After my pregnancy, I realized I would like to dance more classical ballets.  In Zürich it was getting a little bit too contemporary for me, and I missed the classical repertoire so I tried to find a company that would offer me that.  I think the ballet philosophy and atmosphere created by [Boston Ballet artistic director] Mikko Nissinen is really amazing, particularly the choreographers he invites here. In my audition class I had a great feeling of support and thought that the company was not only really talented but always working hard to improve. I am coming here to be a better dancer during the best years of my career.

You say you would like to do more of the classics, but Boston Ballet is known for doing contemporary works.

In addition to some contemporary repertoire, Boston Ballet performs many modern classics from wonderful choreographers, such as Jerome Robbins, which are based on classical technique and feature ballerinas in pointe shoes.  Also, this season Boston Ballet will present two classic works: Coppélia [choreographed by Balanchine and Danilova after Petipa] and Ashton’s Cinderella.  Few companies have such a mix of styles; it’s a perfect fit for me because my dream is to expand my technique and artistry.

The Nutcracker you did in Zürich is very modern. Is the traditional choreography done much in Europe?

Christian Spuck [current artistic director of Zürich Ballett] has his own artistic style.  He created the choreography in the Zürich version, and he wanted it to be more dark and modern.  I think this is the only version in this style in Europe or anywhere. Most companies in Europe have their own classical versions of The Nutcracker, but they are not danced every year. 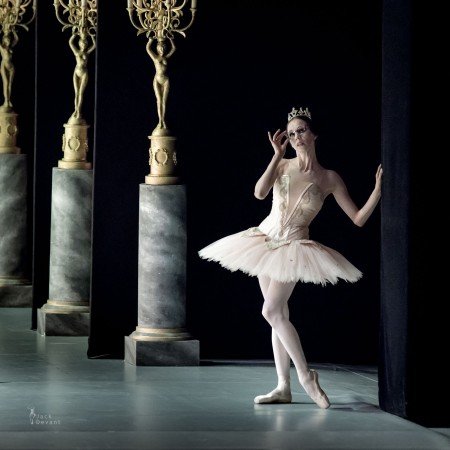 Is The Nutcracker a big moneymaker in Europe?

I think the European model is different.  Most big companies there are supported by their government so they don’t need annual moneymakers. Each company has its own tradition and audience, and tickets for most performances are sold out no matter what they are dancing.

Boston Ballet will be doing forty performances of The Nutcracker this year. Do they do as many in Europe?

No, The Nutcracker is just part of the regular repertoire if it is performed at all. Most companies do not dance more than 10 to 15 performances of any ballet in a season.

Have you seen the sets and costumes for Boston Ballet’s The Nutcracker?

I’ve seen them only on video, but they look wonderful. The costumes are amazing. I’m really looking forward to dancing it.

Have you done a Nutcracker based on the choreography of Petipa and Ivanov before?

Yes, in Russia we have similar versions.  Early in my career as a principal dancer in Russia, I danced Clara, who did both the snow and the grand pas deux. They don’t have the Dew Drop character in Russia; instead four couples do the “Waltz of the Flowers.”

You’re learning the Sugar Plum Fairy and Dew Drop roles, which do you like better?

I enjoy them both.  Mikko’s choreography is really beautiful.  For me, it’s just pure joy. I will be dancing with Patrick Yocum, and he’s a wonderful partner. I’m very happy to dance with him.

I’m also working with [ballet master] Larissa [Ponomarenko]. At the beginning of Sugar Plum’s variation, Larissa says it’s as if Sugar Plum is in a place that’s full of sparkling crystals. Larissa finds words that help you develop your interpretation of the role. 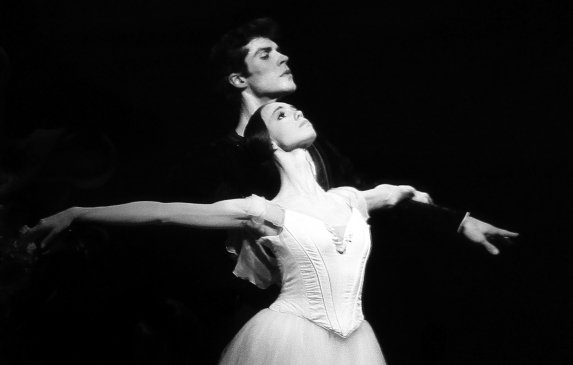 Boston Ballet’s production includes many children. Have you worked with children onstage before?

Yes, I worked with them in another production of The Nutcracker in Zürich under Heinz Spoerli. In that one I played the children’s aunt, who became the Sugar Plum Fairy.

When Clara is played by a child, I think of her as a baby ballerina to whom Sugar Plum, as a mature artist, passes the torch.  Do you agree?

A dancer’s career is very short, so it’s nice to be able to create that connection with the younger generation onstage.  The Nutcracker can inspire the children in the audience and onstage to keep their love of ballet burning, but I am not sure the torch passes directly from Sugar Plum to Clara because there is so much uncertainty in a ballet career.

What do you think of The Nutcracker as the first ballet many children (and adults) will see?

The Nutcracker sends you to another, happier world. I hope the children and adults who come will return to see another ballet. The Nutcracker is the best way to introduce people to the art form.

How do you balance motherhood and a career?

I have a wonderful husband who looks after our son when I am in the studio. It has been an adventure for us to come to Boston, which has so many great things for us to enjoy. When I travel to galas or go on tour, we go together as a family.

What do you want to accomplish at Boston Ballet?

First, I want to become a better dancer and work hard on my technique.  Second, I would like to repay Mikko Nissinen’s faith in me when he brought me here as a principal dancer.  I really trust him to choose the right roles for me to support the company. The best part of joining Boston Ballet will be learning a totally new repertoire and style of dancing.  Everything I am performing this season will be a debut, and that is not only a big challenge but also a great chance to grow.  I have learned so much from watching the dancers here; I will try my best to give back to the company and to the young dancers I work with.

What are your goals for the future?

I am focused on this new beginning because each performance in Boston offers me so many new experiences. I feel that I am starting a great adventure, and my horizons are changing. I am so happy to be a part of this company, and I am looking forward to all that it brings.