The Friday night performance of South Africa’s Vuyani Dance Theatre (VDT) began in the dark with loud weeping, and those wails eventually grew into a song. In Cion: Requiem of Ravel’s Boléro, the company presented grief as a complex journey that’s best shared with others who can help lift the burden. Although it may not sound like a fun way to end the week, the multi-layered performance, despite its heavy theme, was riveting and inspiring. The dancers were dancing about the impact of death, but they did so in a very lively fashion. Whether bent over sobbing or reaching high into the air or energetically tapping up a storm, their movement reflected a spectrum of stages of bereavement, from the depths of despair to the weightlessness of letting go. Befitting the church graveyard setting (crosses were displayed prominently on and above the stage), a sense of religious spirit infused the work. 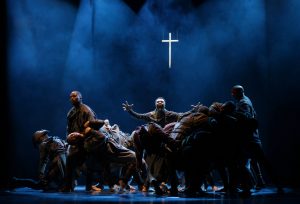 Everything in Cion: Requiem of Ravel’s Boléro was first rate. The musical direction and composition by Nhlanhla Mahlangu was simply phenomenal. I’m not a music critic, but I can’t imagine a music critic would have a negative word to say about the incredible music I heard. I was blown away by the arrangement. The costume design by BlackCoffee, the set design and technical direction by Oliver Hauser, the original lighting design by Mannie Manim, and the sound design by Ntuthuko Mbuyani were all tremendous as well. In fact, I’ve rarely seen a performance featuring such a high level of excellence across the board.

Notably, Cion: Requiem of Ravel’s Boléro offered stellar vocals. Most amazing to me, the four standout singers were completely integrated with the nine talented dancers. Wearing the same dusk-colored monk-like draped costumes, the dancers occasionally sang and the vocalists moved, and the cohesion between them was striking. Strong voices captured an incredible range of sounds. Clicks and whizzes became glorious choral alchemy. I kept waiting to hear composer Maurice Ravel’s intoxicating Boléro, and when I did at what seemed like the performance’s midpoint, the reward was beyond belief. Isicathamiya is a genre of South African a capella music, accompanied by dancing and clapping. Boléro, performed in this manner, was familiar and yet utterly and beguilingly transformed.

Choreographer Gregory Maqoma founded VDT in 1999, and he has won numerous awards. It’s easy to see why. His dancers moved with unparalleled rhythm and grace and continually melded divergent styles — African dance and contemporary dance, yes, but also movement that resembled robotic animation and breakdance. Individuals clung together in a tight-knit group, then they were flung out, sliding into a collapse like a baseball player diving for home plate. Dancers took turns lifting each other skyward. Sometimes they volunteered the comfort of an embrace, but other times they struggled and fought or stepped away into the distance, leaving a mourner alone. Always, however, the performers were expressive, whether quietly so or raging and screaming. At one point, the dancers donned white gloves, which accentuated their hands in the dim light and made them appear ghostly. Strips of cloth that were slapped on the floor and tap shoes came out toward the close of the work, and the resulting explosions of noise were dynamite. I didn’t catch the dancers out of sync once; they moved in flawless unison when called to do so. 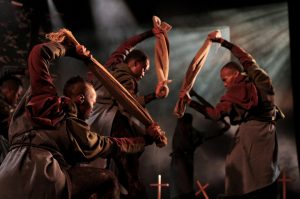 I don’t claim to have understood all of the work’s references and connections (according to the program notes, it was inspired, in part, by the character Toloki in South African literature), or even all of the language (not all was English), but no matter. Dance is an international language that needs no translation, and grief is a universal emotion. I thoroughly enjoyed experiencing this work that weaves together elements from South African culture to create a message of self-reflection for all. The program notes indicate that Maqoma intended for audience members “to pause for a moment and urgently think about the pain inflicted on others by the actions of others.” It’s a timely and important message to receive in a city divided by bitter partisan bickering. There’s not a civil war ongoing in the United States at the moment, but dangerous old wounds are reopening, and we’re killing ourselves in a myriad of ways. Maqoma’s brilliant piece urges peace.