To end Julie Kent’s first season as Artistic Director of the Washington Ballet (TWB), the company presented a world premiere, Frontier, choreographed by Ethan Stiefel, who like Kent, once danced with American Ballet Theater as a principal dancer. Stiefel has many other credits to his name, including dancing as a principal with the New York City Ballet and the Zurich Ballet, acting as the artistic director of the Royal New Zealand Ballet, and serving as the dean of the University of North Carolina School of the Arts. To ballet movie fans, however, Stiefel is perhaps best remembered for his heartthrob role in the drama Center Stage (Kent also appeared in the film). He’s married to ABT principal dancer Gillian Murphy.

With his new ballet, Frontier, Stiefel, unfortunately, delivered a clunker of a commission.  As part of a celebration of what would have been John F. Kennedy’s 100th birthday, Frontier, a tribute to space exploration, reportedly cost $155,000.  It wasn’t just me whose first thought after the ballet finished was, “What a waste of  money.” To be blunt, Frontier isn’t inspiring, despite the inspiring ideas behind it. I have no desire to see Frontier again, and I can’t imagine it having a long life in TWB’s repertoire. 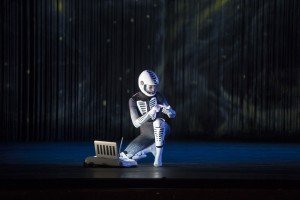 Part of my disappointment stems from the hype leading up to the premiere. I had such high hopes. Indeed, a space ballet intrigued me tremendously. So it was with great anticipation that I held my breath as the curtain rose. And then nothing interesting happened. The scenery and video by Dmitrij Simkin is fairly successful, but I cannot praise anything else about Frontier, other than praising the dancers for sticking it out. The music, by Adam Crystal, is just ok. The utilitarian gray jumpsuits worn by the dancers (costumes by Ted Southern and Flora Gill) are unflattering. Sure, they resemble what astronauts wear, but this is a ballet. Ballet dancers have beautiful bodies, and seeing their movement clearly is often critical to enjoying a performance. Bagginess around the waist and elsewhere did not enhance the beauty of the dancers. To the contrary, the costumes detracted from the typical visual appeal of ballet dancers’ limbs and lines.

The first section of Frontier is danced by a group of “astronaut candidates.” There’s no doubt that the dancers are mimicking astronauts in training. In a series of dull and very literal gestures, they enact physical workouts — pumping weights, jumping rope, doing jumping jacks, etc. Sadly, there’s no discernible emotional involvement. The effect is like watching strangers at the gym, only less engrossing, because the movement is utterly empty.

Emotion appears later, in the form of a tender pas de deux by Sarah Steele, as an astronaut, and Gian Carlo Perez, as her husband. They’re preparing for a goodbye, as Steele is headed to space. It’s a sweet enough concept, but it becomes demeaning when the climax is Steele returning to Earth to reunite with her man. I seriously doubt any female choreographer would have Steele’s brave and triumphant tour of space conclude in an extended series of embraces with her spouse. The pair danced adeptly, but their movement appeared incongruously careful. 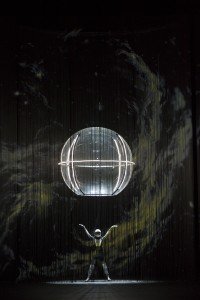 Steele’s solo material as a space traveler should have been captivating. Depicting weightlessness ought to be a fun challenge for a choreographer, but Stiefel failed at this task. The weightless moments looked awkward. Steele’s knees jerked and shuddered, but her movement didn’t resemble weightlessness to me. Where was the joy, the boundlessness? Many aspects of Frontier ended up coming across as cartoonish, especially the clear bubble containing Steele that rose and fell, simulating rocket takeoffs and landings. It was a smart move to begin the night with Frontier rather than ending on this unfulfilling note.

The program only really had up to go after Frontier, and up it went with Jardin Aux Lilas (Lilac Garden). I’ve always liked this Antony Tudor ballet. I’ve seen it done better, so TWB has room to improve, but it’s a ballet that I think suits the company. It was far more choreographically challenging for the dancers and more satisfying for the audience than Frontier that preceded it. EunWon Lee, as Caroline, danced well. Yet she and the entire cast lacked the emotional depth that should be conveyed. To some extent, it’s a matter of nuance. One cannot rely on steps alone to make this ballet transcendent. In this work, TWB’s dancers need to express themselves more dramatically, moving both with more confidence and more subtlety. With more rehearsal time, Jardin Aux Lilas holds promise. Under Kent’s guidance, I assume the dancers can add more grandeur, romance, and polish over time. 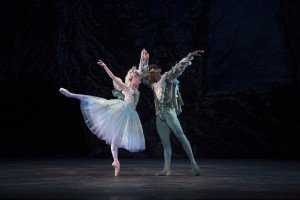 By far the best piece on the program was Sir Frederick Ashton’s The Dream, a delightful ballet based on Shakespeare’s comedy, A Midsummer Night’s Dream. Finally, there were performances that truly shined. I would definitely like to see TWB do this ballet again, and I hope I have that opportunity. Maki Onuki as the Titiana, the Queen of Fairyland, was poised and practically perfect, as always. Brookland Mack, as Oberon, the King, commanded the stage, again, as usual. Onuki and Mack are, hands down, my favorite current TWB dancers, and I love seeing them dance together. Another favorite, Andile Ndlovu, was splendid as Puck. You’d swear he was on a trampoline given the height of his jumps.

The surprise nearly show-stealer in The Dream, though, was Daniel Roberge, who hasn’t particularly stood out to me before. In a ballet replete with charm, his portrayal of Bottom possibly contained the most of it. He flawlessly captured the liveliness and humor of the role. I must include in the charming department the Changeling Boy, Andre DeSantis, who couldn’t have been cuter. The Arlington Children’s Choir, led by artistic director Kevin Carr, did a great job, too. 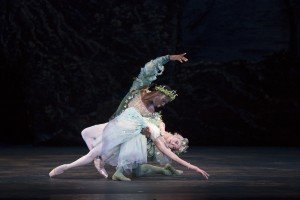 In The Dream, the scenery hardly changed from that of Jardin Aux Lilas — there are dark arches of greenery in both. The mood, however, is vastly different. The Dream is light and happy, and it banished the melancholy of Jardin Aux Lilas. The fluttering fairies, in green tulle, could have danced a little more crisply. As they flitted about, there was more muddle and blur than pointed excitement. Nonetheless, it worked. The Dream plainly should be a “keeper” for TWB.  I’m thankful the evening closed on such a high.

The Washington Ballet: The Sleeping Beauty