When I saw The Washington Ballet (TWB) perform Giselle in the fall of 2013, I was impressed. Under the leadership of then Artistic Director Septime Webre, TWB’s Giselle stuck me as surprisingly successful. It’s not easy to mount a favorite classical ballet like Giselle with a smaller-sized company and have it come across well. And it’s certainly not easy to compete with the esteemed large-scale companies that visit the Kennedy Center and perform ballets like Giselle quite regularly. There’s an appeal to presenting Giselle, as it’s popularity is likely good for ticket sales, but there’s a downside if you’re seen as offering a defective product. Although I was fearful of a Giselle-light nightmare, TWB’s risk paid off, and what the audience got in 2013 was a lovely Giselle, with splendid performances all around. While not on the same level as, for example, the Paris Opera Ballet, whose Giselle knocks you out with the depth of the dancers’ technical prowess and beauty, TWB nonetheless did themselves proud. Although better known for contemporary works, they pulled off a solid classical ballet with aplomb. 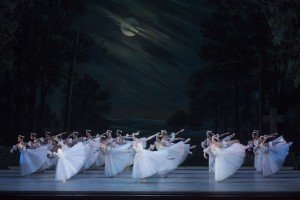 Flash forward a few years to 2017. Now TWB is led by a new Artistic Director, Julie Kent, the beloved former American Ballet Theatre (ABT) star. I was filled with anticipation to see what changes she would bring to Giselle. Her approach would be different from that of Webre, but how? I figured under her direction Giselle would be more traditional. My prediction was right. Things did feel more traditional, most notably the abundance of gestures and mime. Whether this is good or bad, I suppose, depends of the eye of the beholder. For the most part, this beholder wished a lot of the hand talk was cut out. Even though I know the story, some of the gestures were unintentionally comic and confusing. Had I not known better, I could have sworn Count Albrecht (Brooklyn Mack) and Wilfred, the count’s squire (Samuel Wilson), had an extended sign language conversation about wearing no pants. While some gestures were mystifying, others were overkill. Giselle (Eunwon Lee) knocked a fist into her hand to imitate the the count’s knocks on her cottage door, then pulled her hands over her heart. Tons of blown kisses followed.

Giselle started painfully slowly, and the long, drawn out mime bits made me nervous that no actual dancing would occur. If ACT I had not been overpopulated with mime, I’d have enjoyed it more. Thankfully, the pace picked up eventually, but Act I plodded along. No other dancers were on stage at the point where Giselle and Count Albrecht played the “loves me, loves me not” game with flower petals. This made the moment very intimate, but the game lasted too long. The Peasant Pas de Deux (Tamako Miyazaki and Daniel Roberge) was pleasant, but not awe-inspiring. During most of Act I, the dancing proceeded, not crisply, with drama, but like an out-of focus film, everything soft and blurred. Even the hunting party’s three sleek greyhounds (Milou, Homer, and Vesper) were so well behaved, they seemed more like pets in a painting than real animals — not that you want misbehaving dogs on stage, it’s just that there was a lack of liveliness overall. The end of Act I did bring more dramatic tension, but Lee danced her heartbreak and death with somewhat measured abandon. Her performance paled in comparison to Maki Onuki’s delightfully crazed breakdown in 2013. Unfortunately, I wasn’t given a press ticket to see Onuki reprise the role on opening night. 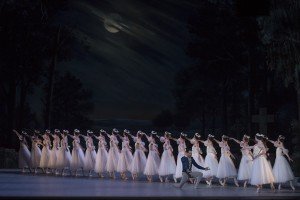 Like the rest of the cast, Lee didn’t really take off until Act II. There, in the world of the ghostly Wilis, she became even lighter and more ethereal, and Mack had a chance to shine too. When Mack lifted Lee above his shoulders, I thought she might keep floating up like a balloon into the sky. His jumps, high and powerful, propelled him into the clouds with her. The 18 dancers composing the Wilis (plus two named Moyna (Nicole Graniero) and Zulma (Stephanie Sorota)) performed adequately. Although sincere, they weren’t especially captivating. The exception was Francesca Dugarte as Myrta/Myrtha, their queen. Dugarte had such command of the stage, I couldn’t take my eyes off of her, even when she was standing still. She was the epitome of intensity. The program doesn’t give credit to a makeup artist, but Dugarte’s face was stunning and eerie, with very dark lips and heavy shadow emphasizing her cheekbones. She looked a little zombie-like, and it worked. Dugarte’s performance was the most haunting and memorable of the night. 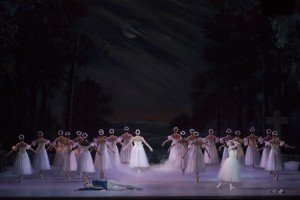 While doubtless some people like the old-fashioned feel of this Giselle, I was disappointed by it. I’ll be interested to see whether Kent can guide TWB’s dancers toward more stirring, and less “safe” performances in the future. It was nice that Kent apparently insisted on live music and found the money to pay for it. Guest conductor Charles Barker, currently principal conductor of ABT, definitely enhanced the experience. One assumes Kent will continue to exploit her ABT connections to bring talent to DC, and that others will be drawn here by her name alone, and that holds promise for the future.