On February 14, 2018, Valentine’s Day, 17 people, mostly students, were murdered by a gunman with an assault weapon at a high school in Parkland, Florida. I know this is a dance review. But this news was still very much on my mind when I attended the performance of John Cranko’s Romeo & Juliet by The Washington Ballet (TWB). Both the popular Shakespearean tragedy and the recent real life event involve the deaths of teenagers. What would have happened in Verona if the Capulets and Montagues owned semi-automatic rifles? The tragic bloodbath surely would’ve been worse than the body count that resulted from a vial of poison and some swords and daggers.

Broken hearts and petty feuds shouldn’t lead to the snuffing out of lives, that much I know. And there’s something especially sad about children who will not grow into adulthood, who will not know the joy and wisdom that should have awaited them. Romeo & Juliet and the Parkland massacre have that in common — young lives needlessly cut short.

Given the awful slaughter that occupied the headlines, it could’ve been a very depressing evening at the ballet, but thankfully it wasn’t. What saved the night was the production itself and my companion for the performance, a neighbor and friend who had never been to see ballet before. John Cranko’s Romeo & Juliet by TWB, viewed through her virgin eyes, had more excitement than it would have otherwise. 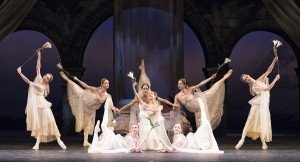 The best thing about Cranko’s Romeo & Juliet may be that it generally moves along at a fast clip. But the best thing about Romeo & Juliet overall, no matter the choreographer, is Sergei Prokofiev’s traditional score. There are snippets of Cranko’s choreography that stuck in my mind, but primarily the beautiful, catchy, emotionally laden music kept running on and on in my head well after the performance was over. I was pleased to see that The Washington Ballet Orchestra was conducted by a woman, guest conductor Beatrice Affron, who did a fine job. (Affron joined Pennsylvania Ballet in 1993, became its music director and conductor in 1997, and has been the principal guest conductor of Boston Ballet since the summer of 2016).

Cranko’s choreography definitely serves the story well. He peppers the dancing with plenty of humor, like a fruit throwing fracas, which is nice when you’re watching a tragedy unfold. For me, however, there are too few stellar moments that really allow the dancers to shine. On the other hand, there’s something appealing about the simplicity of the movement, which allows the tale to proceed very naturalistically. What I could have done without are the times when Cranko has the dancers gather in cute group poses like a pile of cheerleaders preparing for a photo. The repeated folksy snaps of fingers and slaps of the floor somehow annoyed me, too. And, although I understand it’s included in other choreographer’s versions of Romeo & Juliet, I didn’t like the ballroom pillow dance, in which men carry around fat little pillows and fall onto a knee atop them in front of their female partners.

I didn’t care for the scenery and costumes by Susan Benson, either, which were on loan from the National Ballet of Canada. Many of the costumes are so full of fabric that it’s hard to see the bodies of the dancers underneath. Huge hooded capes, wide billowy skirts, and long drapey sleeves act as disguises (yes, there’s a costume ball, but you can still wear a costume while showing off your limbs). Opulent period-appropriate costumes make sense, but these costumes aggravatingly hide movement rather than highlight it. Many of the costumes and backdrops are dark colored, too, which again makes sense, I suppose, but I’d have preferred more lightness all around. The balcony scene I found odd. Adjacent to the balcony was a lump of stone with built-in steps, which Juliet sort of awkwardly hopped down and then hopped back up again. 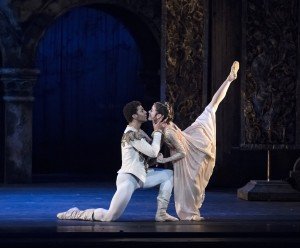 As for the dancers, TWB’s EunWon Lee captured Juliet’s girlish impetuousness. With the assistance of her dreamy partner, Gian Carlo Perez as Romeo, she excelled at looking light as air, wispy and delicate, yet determined as he lifted her. She bent and dipped like a ribbon in his arms. Her spine is incredibly supple. She arched over the head of Perez like a rainbow, and swept backward swooning until her head nearly touched the floor. Perez danced with great strength, perhaps too much so, as his interactions with Lee didn’t seem quite as tender as they ought to be. Their arms floated up and reached out toward each other, and then they came together like magnets, joining hands, but I didn’t feel enough attraction.

Perez is a powerful dancer, and Lee creates unbelievably elegant images, but I felt Andile Ndlovu as Mercutio delivered the best performance of the cast I saw. Cranko endowed the role of Mercutio with a ton of personality, and Ndlovu seized every opportunity to accentuate the endearing playfulness inherent in the choreography. Ndlovu also has a vertical jump like a rocket. He traveled straight up to impressive heights, his body maintaining perfect lines and form, all while smiling broadly. Mercutio’s dying moments are over the top, but Ndlovu danced it just right, balancing clownish wit with heartstopping sadness. The male leads, when dancing together, though, weren’t in perfect synchrony, which was a disappointment. 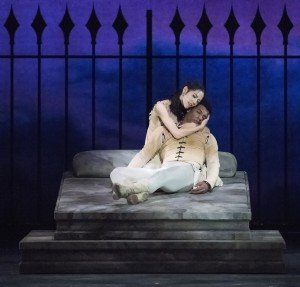 In some iterations of the ballet, there’s an epilogue in which the two warring families come together in mourning after the loss of their children and pledge peace. I yearned for this reconciliation, but Cranko’s Romeo & Juliet ends as most of the ballets do, the lovers dead, collapsed upon each other, cradled in each other’s arms. Let’s hope our world can do better going forward when it comes to preventing tragedies.