The Washington Ballet (TWB) began March 2017 with the classical ballet, Giselle, and ended it with a mixed bill featuring works by three contemporary choreographers, Jiří Kylián, Justin Peck and William Forsythe. It’s hard for me to say which TWB performance this month I preferred. Frankly, I didn’t love either the classical or the contemporary presentations, which probably means I’m not in love with the company’s present artistic vision. This doesn’t mean there aren’t fine dancers in TWB, or that Julie Kent, in her first year as TWB’s Artistic Director, is doing poorly at her task. To the contrary, TWB has some very likable dancers, including long-time local favorites Maki Onuki and Brooklyn Mack, who glowed as usual. And in Forsythe’s challenging In the Middle, Somewhat Elevated, Andile Ndlovu, Ayano Kimura, and Kateryna Derechyna each had bright moments. Neither Giselle nor this evening of contemporary works were disasters by any means. Yet I walked away disappointed both times.

Before seeing the contemporary program, I thought it might suit TWB better than Giselle because in the past the company has excelled in its presentation of younger works. But, after viewing the contemporary program, I think the current company is equally strong, or weak, depending on how you look at it, at both contemporary and classical works. In some ways, this is good news for Kent. It means that she has dancers who can tackle a variety of styles. The bad news right now is that TWB is clearly going through some growing pains. Under Kent’s guidance, I have hope TWB will move into the realm of excellence. There are thrills to be had, and Kent needs to figure out how to make TWB deliver them. 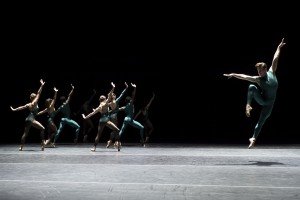 The Washington Ballet, In the Middle, Somewhat Elevated, photo by media4artists Theo Kossenas

Forsythe’s In the Middle, Somewhat Elevated, is a piece that’s packed with thrills, but it came across as mostly cold and repetitive. I don’t care for the music (the music by Thom Willems in collaboration with Lesley Stuck sounds, to me, like a garbage truck that has crashed and emptied its heavy metallic contents). I also don’t care for the dark and stark lighting (which often obscured the faces of the dancers), the plain jade green and black costumes, or much of the choreography (the costume, stage, and lighting design are all credited to Forsythe), but I acknowledge that it’s a work with a strong punch. It begins with a rip of sound, and two female dancers, hands on hips, who stare at each other as if beginning a duel over center stage. While I’ve read about two golden cherries hanging above the stage, what I saw was a face with a swoosh of hair, eyebrows, and a mustache. Is what’s hanging in the middle, somewhat elevated open to interpretation?

On opening night, the dancing in In the Middle, Somewhat Elevated wasn’t consistently crisp, and the clanging music hit harder than the dancers’ slashing kicks and glares. There were glimpses of greatness by a few dancers, but those glimpses were fleeting. Just when one dancer seemed to be really “getting it,” the momentum tapered off and the energy died. The music falls in the category of aural assault, and unless the dancing is dazzling, the relentlessly annoying music tends to overtake everything. The choreography demands that the dancing be as fierce as the music, and I didn’t think the dancers entirely fulfilled their obligations. 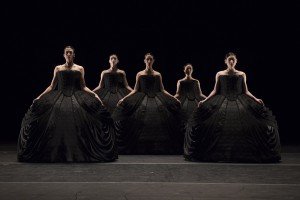 Of the three works on the program, in my eyes Petite Mort was the most successful. I have a soft spot for this little gem. It’s short, sweet, and funny, a real crowd pleaser. I wouldn’t ever place it first on a program, though. It’s more of a closer. It seemed odd to get settled into my seat for such a brief appetizer, only to have the intermission that followed last about as long as Petite Mort itself.

So many things about Petite Mort are clever and unique, from delicately balancing swords (even picking up swords between toes), to hiding behind huge rolling dress forms. The costumes, by Joke Visser, basically nude corsets, fit Mozart’s music and show off the bodies of the dancers well. I’ve seen Petite Mort numerous times, and it’s the playfulness and the surprises that I adore. Somehow, however, the surprises were less impactful than I remember, and I think this is because the pacing and timing were off. 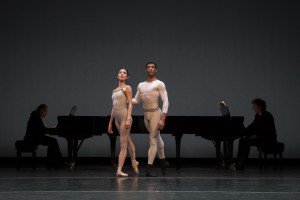 The Washington Ballet, In Creases, photo by media4artists Theo Kossenas

Justin Peck is a young choreographer who has received heaps of praise recently. I’m embarrassed to admit I don’t understand the hype. In Creases, like other Peck works I’ve seen, is underwhelming. His choreography is not on par with that of Kylián and Forsythe. I was baffled by In Creases. Some bits of choreography were so stiff and awkward, some phrases so unconnected, that I cringed. Sure, it’s an early Peck piece (from 2012), but it looks like exactly that — a young choreographer’s fledgling efforts.

Eight dancers, in plain costumes (they appeared to be dusky white, but it was hard to tell with the lighting), the men wearing black socks and black ballet shoes, moved like they were executing class exercises, much like the fairly simple movement and costumes in Balanchine’s The Four Temperaments. But Peck’s movement was occasionally odd, and not in a good way (a male dancer jumped back and forth over women lying on the ground, like a football player doing pre-game warmups), and otherwise seemed conventional and uninteresting. The dancers looked mechanical and sometimes rushed. Their arms repeatedly resembled clock hands jutting out at angles. They joined in lines, or in flocks, some posed by the two pianos, which faced each other. To me, the music sounded too soft, although the pianists, Glenn Sales and Eric Himy, played beautifully (music by Philip Glass). I overheard behind me the following conversation, “What did you think of Peck’s piece?” The answer — “Not much. It was kind of boring.” I concur. 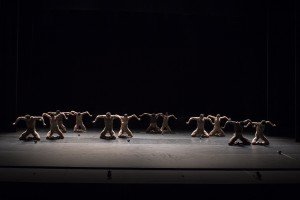 Strangely, the printed program did not include any biographical information about the choreographers. Strange, too, is the fact that for In Creases, and In the Middle, Somewhat Elevated, the program did not reveal what year, where, and by whom the pieces premiered (or provide any other information about these works, like what inspired them). Those seem like peculiar oversights. In addition, on opening night, two of TWB’s Studio Company members performed (Darion Flores and Alexandros Pappajohn), but their biographies were not included in the program, either. I’m capable of finding all of this information online, but it would’ve been nice not to have had to have gone through the extra effort.

Unfortunately for TWB, on opening night there were some empty seats, and I got the feeling that many in the audience were longtime dedicated TWB supporters — the kind, though, who are more interested in dressing up and networking than in actually enjoying ballet, and who would politely clap for anything and hand over a check in order to continue to hobnob with pretty people. Several patrons gabbed loudly even in the midst of the performance. Hamburg Ballet’s The Little Mermaid is currently charming audiences at the Kennedy Center, during the same timeframe as TWB’s contemporary program, and I suspect that the Kennedy Center is drawing some of the serious ballet fans, as well as tourists, away from what otherwise might have been a better selling performance for TWB. In the future, it probably would be wise for TWB not to compete for an audience with a ballet company at the Kennedy Center, and not to choose a contemporary program during a time when National Cherry Blossom tourists could be wooed to purchase tickets to a more familiar classical ballet.