As it did last year, The Washington Ballet (TWB) presented three world premieres at the end of its season. In 2017, to conclude Julie Kent’s first season as TWB’s Artistic Director, the company presented one world premiere, Frontier, choreographed by Ethan Stiefel. The new works this year were far better than any of these prior world premieres. In particular, the new work by Stiefel was a success. This surprised me because I called Frontier, a ballet about space travel, “a clunker of a commission.” In my handwritten notes about Stiefel’s new piece, Wood Work, among other things I scribbled “redeemed.”

Indeed, Stiefel’s Wood Work was not only my favorite of the three world premieres, it’s an accomplished ballet that I’d like to see again and hope TWB repeats. The dancers looked fabulous, composed and yet joyfully springy. Stiefel’s choreographic skills shined through in this one. I liked everything about it. The Danish String Quartet’s modern renditions of traditional Nordic folk music played splendidly by Regino Madrid (violin), Armine Graham (violin), Stephanie Knutsen (viola), and Sean Neidlinger (cello) run from somber to sweet. The costumes by Derek Nye Lockwood fit the theme — prim frock coats and tailored dresses in mostly dark muted blue and gray shades but also with a highlighted couple (Maki Onuki and Gian Carlo Perez) in mustardy gold. The excellent lighting design by Joseph R. Walls places the dancers in a foggy forest, which is later steeped in dappled sunshine. The choreography is varied and interesting, and very musical. And the dancers seemed at ease with the shifting moods, from flirtation to longing, whether buoyantly leaping and grinning or standing still, looking pensive.

Wood Work is inventive and invigorating, and the imagery is rich. I admired the often clean lines, the way the dancers’ arms seemed to sprout at the beginning like new buds and branches. When the music sounds like a jig, dancers tap their feet along with the plucking strings, their heads happily jiggle. To the appealing wholesomeness of what might be remnants of a community dance, Stiefel adds delightful quirks. When everything seems straightforward, Stiefel reliably throws in movement that breaks the Puritan feel. Suddenly, hips swivel, arms snake, women on pointe purposefully land on half-toe, dancers walk backward, some face up on their hands with knees up in a crab-like position kick up their legs, arms whip around in a backstroke. Onuki was at her spritely best, and Perez matched her enthusiasm. Perez thrilled in a solo section in which his shoulders peculiarly but wonderfully rolled over and under, and then he sped off in a series of spins.

Dana Genshaft, the lone female choreographer on the program and a former soloist with the San Francisco Ballet, contributed Shadow Lands, set to music titled “Omnivorous Furniture” by Mason Bates. I might have enjoyed it more if I had enjoyed the music, but I found the recorded music loud and extremely unpleasant, jazzy but uncomfortably dissonant. I do think, however, than Genshaft and her creative team adeptly conjured an alternate futuristic world. The costumes by Reid & Harriet Designs feature an abundance of nude sheers and tight-fitting metallics, shorts that look molten. Once again Joseph R. Walls hit it out of the park with his lighting design. Light dazzles forth in a vertical beam that peeks between two almost-closed curtains. Subsequently, a spectrum of mood-shifting colors bathes the dancers. 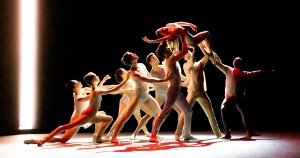 For all the drama in the music, however, the dancing somehow struck a false note with me. Genshaft’s choreography isn’t timid, but it doesn’t delve quite far enough into the realm of the strange given the strange music that accompanies it. I admit I easily tire of endless extensions and lifts in which female dancers spread their legs. A woman’s hand resting on her male partner’s chest or shoulders — that seems oddly traditional and incongruous with the sci-fi theme. Rolling on the ground, though, isn’t typical in a ballet, and I wanted to see more of that. The dancers sometimes came across as insect-like, and when they did, I paid more attention. At times, the strip of light at the back of the stage could have been a bug zapper.

In sum, I felt that Shadow Lands fell short of being finely polished, but I would welcome seeing something else by Genshaft. I know that just because one piece doesn’t capture my fancy, another by the same choreographer just might.

The evening of world premieres closed with Trey McIntyre’s Teeming Waltzes. I had read beforehand that the ballet would incorporate a ball pit. I wasn’t sure how I’d feel about that, but after seeing it I can tell you it’s a fun prop. Yet I don’t think McIntyre used it to its fullest potential. His Teeming Waltzes is a silly comic romp, missing inspirational choreography, but supplying laughs aplenty. In the program notes, McIntyre said he created it to “generate more love in the world.” Lighthearted ballets have their place in a company’s repertoire, but I don’t think Teeming Waltzes is one that will likely be continually performed.

The costumes and scenic design by Design Army are a sight to behold. Two bright yellow suns (or moons depending on your perspective) hang over the stage. More planets dangle later on, and a handful drop at the end. In addition, of course, there’s the ball pit at the back. The ball pit is mostly used as a sight gag, with relatively few little kicks and dives into it. The music is Johann Strauss’s “Emperor Waltz” and “Blue Danube,” played live by the same quartet that accompanied the first work on the program, plus the spectacular Glenn Sales on piano. The music doesn’t really fit the choreography, but I assume that was McIntyre’s intent. The contrast is humorous. 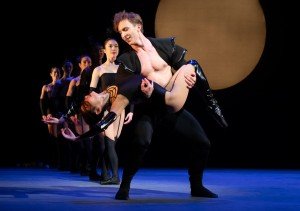 Alex Kramer and Corey Landolt wear white and yellow vests, respectively, like members of different sports teams. Kramer’s sleeveless vest fully covers his upper body, but Landolt’s yellow one is tiny and leaves his chest mostly exposed. There are also ridiculous giant circular hats for six women, yellow and black ones that make them look like oversized black-eyed susans. And their black leotards have a circular cutout in the center that shows off their belly buttons. Onuki appeared in a spider-woman type getup. Her face had a mask of black lines, her neck was lined in black webbing, and she wore shiny tall black boots. Her partner, Tobias Praetorius, an exchange artist from the corps of the Royal Danish Ballet, wore a black sort of bolero style jacket that reminded me of a matador. Together, they resembled practitioners of sadomasochism.

Kramer and Landolt made the most of their comic roles, throwing balls at each other, then making up with a hug. They excelled at clowning, turning expertly from playful to vengeful to tender. They’re “frenemies,” I guess? I can’t say the six women are given much interesting to do, other than to rock their heads back and forth, and in one case retrieve a tossed ball. Onuki and Praetorius in the second half of the ballet don’t seem very funny, and I couldn’t discern why they were there. Teeming Waltzes is campy and amusing, but it’s not one of McIntyre’s best works.