The Washington Ballet presented three world premieres by three dancer/choreographers, Gemma Bond (a current member of American Ballet Theatre’s corps de ballet), Clifton Brown (who rejoined the Alvin Ailey Dance Theater in 2017), and Marcelo Gomes (a former Principal Dancer with American Ballet Theatre who recently resigned from the company amid sexual misconduct allegations). Being a good dancer does not necessarily mean one has choreographic talent. The premieres by these emerging choreographers produced mixed results. All three new works feature classical music and classical ballet vocabulary, including ballerinas en pointe. To my surprise, Brown, who appears from the biographical information in the program to be the least experienced choreographer among the three, and who is perhaps less versed in traditional ballet technique than the others, achieves the most success.

Brown’s Menagerie, set to the music of Gioachino Rossini (Duet for Cello and Double Bass in D Major, played live by Suzanne Orban and Marta Bradley), comes across as a complete and remarkably well crafted ballet. Curiously, its shortcomings are also some its strengths. I like it when all of a sudden the dancing on stage goes somewhere expected. In Menagerie, the dancers share moments of humorous self-consciousness, inviting the audience to laugh at the fact that the dancers are hyper-aware they’re being watched. They cheerily wave at faces in the crowd, breaking the usual wall between performers and those taking in the performance. It’s funny, at first, it’s just that there are too many of these moments. A little quirky clowning around goes a long way. The extensive mugging and silliness ends up detracting from an otherwise accomplished and complex piece. 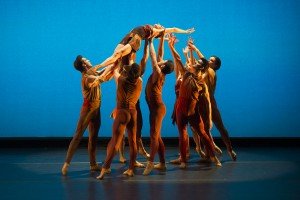 Brown uses both male/male and male/female partnerings. This use is no longer unconventional in the ballet world. Indeed, it’s fairly ubiquitous in today’s contemporary ballets, and I appreciate it. Brown steps it up a notch by having the women occasionally take on the traditional functions of male dancers. A female dancer’s arms encircle her male partner’s waist as he turns. She becomes the guardian and protector.

I also noticed many lifts in which the female dancer’s legs are kept tightly locked together in a straight line, which I’ve been seeing a lot lately, too. The women, frozen stiff and solid, are twisted and turned like batons. Finally, Brown’s interpretation of the music is at times awfully literal, but amusing, and it mostly works. In a section in which there are low plucked strings, a male dancer hilariously creeps along, head down, deeply hunched over like a cat burglar.

I enjoyed Menagerie and give it a grade of B, which is pretty good for such an early choreographic effort. Other than wishing for Brown to dial back the directness of the wit a bit, I feel his choreography has all the structure, visual interest, and variation one wants to see in a contemporary ballet. I absolutely look forward to watching him grow as a choreographer and hope he’s given the chance to do so.

Bond’s new work, Myriad, did not please me, and based on seeing it, I’d not be particularly eager to see another of her pieces. Myriad is stuffed with a lot of what I don’t like in ballet. The six female dancers move from pretty picture pose to pretty picture pose, and it looks as if that’s the intent, to be ready to be photographed at every turn. And then there’s the melodrama. The women often look pained. Their arms swoop and arch and reach like storybook dying swans or tragic sylphs, but I couldn’t fathom the reason behind the histrionics, unless it was simply to copy familiar classical ballets. 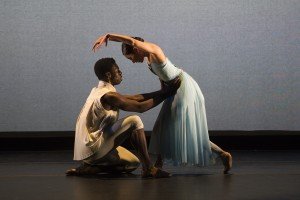 I was also bothered by the presence of the sole male dancer. When I attended the performance, the male role was danced by Brooklyn Mack. One “problem” with Mack is that he lights up the stage and dances so incredibly brilliantly. The female dancers paled in comparison to his bright spark. Another problem is that there is a man in the work at all. I understand that the pas de deux is a staple of classical ballet, and Bond, in emulating the older classics, clearly wanted to include a series of them. Yet Myriad is supposedly about different facets of the female character, and the many facets of women obviously can be communicated without a man on stage.

The women, each wearing a long flowy tulle skirt in a separate shade of blue (costume design by Bond), dance to recorded songs by Henry Purcell. The distinct colors, I imagine, are made to highlight their distinct personalities, but I didn’t feel the distinctions in their successive solos. In fact, as my companion for the evening noted, Myriad resembles an episode of the TV show The Bachelor, in which one man dates multiple women. I don’t think that’s what Bond was attempting to convey!

Gomes’s work, The Outset, closed the program. He describes in the program notes that The Outset is about a small American town, and a man who longs to break away and discover what lies beyond the predictable place he knows. That choice, says Gomes, means leaving loved ones behind. I was able to discern, especially because of the suitcase, that Gian Carlo Perez, as the lead male, wanted to go somewhere new. He also kept staring at one upper corner of the stage, as if that’s the only location that life beyond his small town could possibly exist.

There’s an extended duet in which the central pair (Perez and the vibrant Brittany Stone) agonize together over the man’s desire to take off. The pas de deux is at least twice the length it ought to be. I do think there were some nice moments in it, my favorite being a long embrace because it gave the dancers and the audience a chance to breathe. 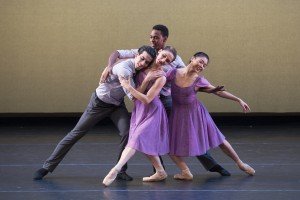 The Washington Ballet in Marcelo Gomes’s The Outset, photo by media4artists Theo Kossenas

An interesting quartet emerges in which two men and their girlfriends dance together. The story, however, is not quite “traditional.” One of the men becomes heartbroken over his close pal’s eventual engagement. The wedding preparations (swooshing around a veil, ribbon, tulle skirt, and bouquet) and “walk” down the aisle (a series of bourrées) are something right out of an old classical ballet, and not in a good way. So, too, is the unoriginal circling up and clapping to represent the folksy spirit of the small community. The Outset, overall, seems lightweight, and it doesn’t elevate itself above any of dozens of ballets with leaving, small town, and/or wedding themes.

The best thing about The Outset, in my view, was the music by Antonin Dvořák (String Quartet No. 12 in F Major, Op. 90 “American”) played by four women: Sally McLain, Mayumi Pawel, Jennifer Ries, and Orban. These strong musicians, during women’s history month, made me proud to be a woman. The ballets, on the other hand, didn’t do very much to uplift the status of the fairer sex.