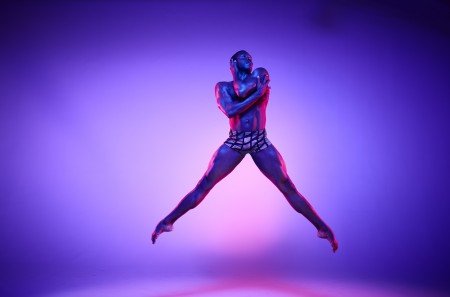 Bay Area dance fans have much to look forward to during the Spring Season, one of the most-anticipated events being Alvin Ailey American Dance Theater’s yearly residency at Cal Performances. Every year, the company, presently under the Artistic Direction of Robert Battle, spends a week on the campus of UC Berkeley, engaging with the community and performing a set of distinct programs at Zellerbach Hall. I usually catch one of these shows, but 2018 called for something different. This April marks an astonishing five decades of bi-coastal creative partnership between AAADT and Cal Performances. With such a major milestone, it felt like the year to take in every program. And so I spent the weekend at Zellerbach Hall, seeing each offering (though not in order) on consecutive days – C on Friday night, A on Saturday afternoon and B on Sunday afternoon.

April 13th (Program C) – The scope and breadth of AAADT’s repertory was on full display with Program C’s first two works, dances that were about as different as one could imagine. The curtain rose for the West Coast premiere of Gustavo Ramírez Sansano’s Victoria (2017), revealing large, stark, tree-like structures (design by Luis Crespo). Michael Gordon’s dire score pervaded the space. Melodic chords would ring out for a second before deflating and sliding dissonantly down the scalic wall, like fingernails scraping down a chalkboard. A soloist began cycling through Sansano’s high-powered, frenzied, athletic choreography – super fast movement imbued with abrupt starts and stops, extreme isolations, sharp edges, locked arms and legs. A sense of groundedness was also present, with many of the phrases unfolding overtop of a bent knee foundation. Dancers emerged from the shadows to join the scene, the manic physical energy continuing and building. Halting gestures punctuated the physical prose; fingers splayed and circled in the casting of a spell. The atmosphere was anxious and eerie, as if we had been transported to the ominous forest scene of a fairy tale.

Everything about Victoria felt unsettled, and not negatively so, purposely. This work was in flux from beginning to end; circumstances and conditions constantly changing; directions, axes and weight shifting in every instant. Unfortunately, the music actually distracted a little from that beautiful uncertainty. It did lighten a bit in the last third of the piece, but quite often, the piercing tones pulled focus away from what was happening onstage.

The evening’s sonic journey continued with Twyla Tharp’s The Golden Section. Ahead of the curtain, ephemeral, celestial tones (by David Byrne) sang through the air, this time a perfect match to the retro fête that would soon commence. A gold lamé curtain hung as a backdrop, framing a work that is undeniably a product of the time in which it was created, 1983. But The Golden Section is not at all dated. It’s fun. It’s whimsical. It’s celebratory. It’s about a community coming together and enjoying one another.

Wearing gold costumes, golden jazz boots and calf-high tube socks, the cast filtered on and off the stage in a variety of solos, small group sequences and large ensemble choreographic statements. Disco and concert jazz dance influenced and peppered the contemporary phrases – hitch kicks, stag jumps and pony step-ball-changes meeting shimmying shoulders and undulating hips. And just like in Tharp’s iconic Deuce Coupe (composed in 1973 for The Joffrey Ballet), The Golden Section concludes with a lyrical, balletic sequence, acting as a stunning counterpoint to the rest of the piece. Seeing The Golden Section in 2018, nostalgia is palpable. Though not just for the movement of that time, for the choreographic clarity. While some might find it to be old school, strong, defined physical positions can never go out of style as far as I’m concerned.

An embodied interpretation of Ella Fitzgerald’s jazz scat, Battle’s 2008 duet Ella is a definite crowd-pleaser. Danced on Friday evening by Renaldo Maurice and Michael Francis McBride, the brief pas de deux finds the pair scatting with their entire being. Choreography changes levels to mimic the vocal path up and down the musical register. Consecutive split jumps and dramatic knee falls speak to virtuosity. Battle even injects the “shave and a haircut” rhythm into the percussive footwork and has the two dancers share a drink through gesture.

April 14th (Program A) – Program A’s first two pieces echoed Program C to some extent with one work from the early 80s and one from 2017. First up was Talley Beatty’s Stack-Up (1982), a composition that transports its audience to an earlier era. Shimmery fabrics, aerobics outfits and bell bottom pants abounded. Jazz runs, expansive pas de bourées and layouts permeated the choreography. Stack-Up’s high-energy opening statement (danced by seventeen company artists) had a definitive disco club vibe, wherein the movement and the youthful elation were totally infectious. Suddenly, a lyrical saxophone ballad ushered in a change of intensity, but not of emotion. A series of tender, sweet, caring pas de deux unfolded as the wind instrument crooned, each replete with flowing arms, partnered falls and swirling lifts. Stack-Up had joy to spare, expressed both in large gatherings and intimate exchanges.

But then there was a total shift. Drugs enter the picture and one of Stack-Up’s central characters is pulled under their influence. Quickly, his reality disintegrates with episodes of physical mania, mental confusion and desperation. Joy gave way to anguish, and as Beatty’s dance closed, there had appropriately been no resolution.

Current company artist Jamar Roberts’ Members Don’t Get Weary took the middle spot on the mixed repertory bill, an ensemble work set to John Coltrane’s music. The West Coast premiere opened with the cast costumed (also by Roberts) in various shades of blue, wearing large straw-brimmed hats. Gazing out into space, they reacted to something in the distance, walking towards it, hands reaching to grasp it. Then, the group turned and the sequence started again. Were they searching for the musical melody? I wonder, because as the piece evolved and new material was introduced, the dancers seemed to embody the musical lines. Perhaps their search had been successful. Elbows fluttered while the piano trilled, feet ran during a sustained tremolo. During a long descending arpeggio, bodies crumpled slowly to the floor and as multiple musical voices intertwined, the cast similarly passed by each other, weaving their bodies in harmony. As opposed to some neo-classical choreographic approaches to music, Members Don’t Get Weary wasn’t seeking an interpretation or mimic of the score; here, the movement and sound were deep in conversation.

Costumed differently than the rest of the ensemble, in dark eggplant, a soloist appeared just as a new voice (jazz flute, I think) entered the score. She hovered above the ground just as the higher musical line also hovered above the other instruments. A trumpet solo layered in unexpectedly, while another soloist appeared from the back of the stage, similarly out of nowhere. Members Don’t Get Weary’s emotive quality suggested that narrative threads were also at play, though for me, it was the structural interdependence of the music and movement that spoke volumes. However, I do think the piece could be shortened. There was a full cast section about two thirds of the way through Members Don’t Get Weary that really seemed the end point. But there was quite a bit still to come – material that felt like a lengthy coda after that vibrant segment.

April 15th (Program B) – Program B was all intensity and power with three works of topical thematics and choreographic rigor. AAADT’s artistic team also wisely chose to include Ella on this program, injecting a hint of fun into an otherwise heady mix. Danced on Sunday by Megan Jakel and Jacquelin Harris, it was wonderful to see a work where casting is not gender-specific. On Friday, I saw Ella danced by two men, Sunday by two women and according to the program, on Wednesday night, it was performed by one woman and one man. 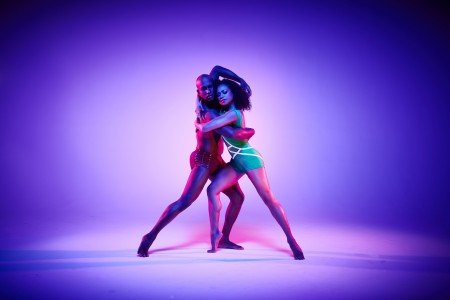 A beam of spiraled light, design by Burke Wilmore, cast a shadowy haze as dancers entered from the side wings for the West Coast premiere of Battle’s Mass. Boureéing in parallel, hands cupped in front, and costumed in long robes, they looked like a chorus of angels (albeit with serious facial expressions) floating over the stage’s surface. Sometimes the group moved as a collective, familiarly cycling through a physical pattern known to them, like a daily practice or a long held religious liturgy. At other moments, individual dancers would break away, railing against expectations and conventions. A time in which their own reality rose above the authority of the mass (an aptly titled work, to be sure). Mass’ vocabulary had a wonderful, diverse range: calm side bends; vigorous flat-footed jumps; gestural punctuations; pounding, percussive arms. And Battle’s choreography for Mass also had a distinctively angular quality, which reminded me of Graham chorus work.

Homelessness was at the center of Shelter, choreographed in 1988 by Urban Bush Women’s founder Jawole Willa Jo Zollar. With a percussion and text score, six women took an incredibly intense journey from the dance’s first cluster pose to its final moments, one that had a multitude of interconnected narrative fibers. Clinging to each other, they searched for safety and protection. Desperation roared through the space as they collapsed and seized on the ground. They sought visibility through extreme jumps, layouts and arms flinging up in the air. They would catch each other mid-fall in companionship and empathy. Gathering downstage, the cast pointed their finger out to the audience, tracking the horizon from right to left. A confronting gaze now fell on the viewer. And throughout Shelter, the text score reminded us of the porous space between what we deem to be security and the poverty we so often ignore.

Following this striking performance by six women of the company, the gender dynamic pivoted and six men took the stage for Battle’s 2001 The Hunt. Primal, ritualistic, aggressive phrases pulsated on the stage. The men circled each other, stalking their prey. They ran across the space, determined and focused with singular, unflinching purpose. They flew, leaping and diving in surprise attacks. Nothing let up during the entire dance – fingers throbbed like rhythmic claws, palms sliced through the air. One dancer even provoked the others, gesturing to them, “come and get me.” As the lights fell on The Hunt, the whole theater seemed to exhale as one body – it felt like no one had dared to move a muscle during the entire dance.

In keeping with tradition, each AAADT program closed with a performance of Ailey’s 1960 masterwork Revelations. Like so many, I am completely moved by this piece every time I see it. And like others, I also have my favorite moments and vignettes. Highlights from Friday evening include the intense hinges and sagittal curves in “Didn’t My Lord Deliver Daniel,” both classic examples of Ailey’s Horton lineage. Ghrai DeVore’s promenade in ecarté and front penchée during “Fix Me, Jesus” were the best, technically and artistically, that I’ve ever witnessed. And Clifton Brown had such an inspired interpretation of “I Wanna Be Ready,” his struggle, so, so potent. On Saturday, Akua Noni Parker and Jermaine Terry’s “Fix Me, Jesus” had the most stunning last pose, growing and growing as the lights dimmed and Yannick Lebrun’s arabesque line in “I Wanna Be Ready” was something to behold. Sunday afternoon’s “Wade in the Water” scene struck with supple, articulate torsos from the entire quintet, particularly Vernard J. Gilmore. And the trio of Jeroboam Bozeman, Sean Aaron Carmon and Kanji Segawa danced an exceptional “Sinner Man” variation, every parallel pirouette, lay-out, army crawl and tilt in second a perfect blend of technique and emotion.