“Why Wendy Whelan?” I kept thinking as I watched Some of a Thousand Words, a unique collaboration between Whelan, dancer and choreographer Brian Brooks, and the string quartet Brooklyn Rider. For those who don’t know, Whelan retired in October 2014 as a celebrated principal dancer with the New York City Ballet. Retirement for Whelan doesn’t mean giving up her dance career. To the contrary, saying goodbye to life as a ballerina simply opened the door for her to delve deeply into contemporary dance. Even two recent hip surgeries haven’t slowed her down much. Whelan admits she’s “still recovering,” but I detected no traces of lingering injuries in her performance of Some of a Thousand Words, despite 30 years with the NYCB and the inevitable physical toll 23 years as a principal dancer takes on one’s body.

I wondered why Brooks chose Whelan as his partner, given her limited experience in the realm of modern dance. The choice seemed odd to me. Whelan is, without a doubt, a talented dancer, but intense ballet training is hard to unravel. Ballerinas often struggle with contemporary works. Ballet bodies have been molded to move in certain prescribed ways, and choreography beyond ballet presents significant challenges for serious ballet dancers. This is actually a large part of why Brooks wanted to work with Whelan, he explained in a post-performance conversation with the artists following the performance, facilitated by Vladimir Angelov, founder and director of Dance ICONS, an international organization for choreographers. In fact, both Whelan and Brooks alternately excited and terrified, they said, by the prospect of merging their different backgrounds and seeing what was possible.

Brooks counts among his influences Elizabeth Streb, Trisha Brown, and Susan Marshall. Whelan described how learning Brooks’ choreography was “so freaking hard” that she cried. And yet she’s stuck with Brooks for five years. Damian Woetzel, via the Vail International Dance Festival, initially played matchmaker between Brooks and Whelan. Brooks was commissioned to make a new work with dancers from the NYCB, and 2012’s First Fall, with Whelan, resulted. It’s clear Whelan remains hungry to grow as an artist. Upon seeing Brooks execute unfamiliar movement while warming up prior the prior performance, Whelan reportedly exclaimed, “What’s that called and how do I do that?” The pair, who have forged a friendship, came together again in Some of a Thousand Words. Brooks added choreography, making First Fall the last section of this new work. In my view, First Fall, to the music of Philip Glass, as great as it is, doesn’t really fit with the rest of Some of a Thousand Words. It feels like a separate unit, probably because it was created as one. 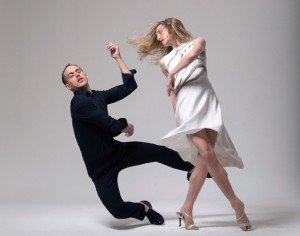 Wendy Whelan and Brian Brooks, photo by by Erin Baiano

First Fall, though, is mesmerizing in ways similar to that of the beginning section of Some of a Thousand Words. In First Fall, Whelan and Brooks explored supported falling. The choreography here made use of principles of contact improvisation. Whelan tipped backward onto the back of Brooks, and Brooks slowly lowered to the ground, with Whelan, stiff as a board, riding his back for the descent. This method of falling repeated with variations. When Brooks pivoted, Whelan came to rest at a different angle. In preparing for her falls, on relevé with her arms spread like Christ, Whelan trusted, and Brooks, with an occasional wince and remarkable strength, delivered only gentleness on the way down. Maybe more impressive was the ride up, in which Brooks moved from his knees to nearly a downdog position, smoothly nudging Whelan to standing.

Some of a Thousand Words began with Whelan and Brooks, side by side, walking forward very slowly in unison, so that one could see the curling of their toes, the unfolding of their knees. Waves started to occur. An arm swung forward, knees stayed pliable, and gradually, in perpetual rhythm, with slight shifts in weight, they took up more space on the stage. The live music echoed the movement. Michael Nicolas on electric cello, playing Jacob Cooper’s Arches, in one stunning moment that I noticed, physically echoed the movement as his elbow pulled back almost simultaneously with the dancers doing the same thing. The unison between Whelan and Brooks ceased quietly, but impactfully, as one suddenly faced a new direction. Timing changed, too. They moved in and out of synchrony, going separately for a while and then drawing together. Like randomly rotating figures on a screensaver, or fish tenderly wriggling their bodies around in a fish tank, the dancers languidly and lusciously looped across the floor in soft calligraphic patterns. For me, at least, the effect was relaxing and rewarding. I love seeing phrases in dance repeat.

When the work moved on to a duet with chairs, however, I became restless. I acknowledge I’m biased when it comes to chairs. I hate chairs as choreographic props. Yes, chairs are easy to obtain, lightweight, inexpensive, transportable, and present the opportunity to add levels to dancing by stepping up onto and off of them, but I just don’t find chairs intriguing. Why not a handmade prop that’s not a chair but still offers some of the same benefits? Brooks used the chairs imaginatively, but I’m worn out by having seen countless dancers manipulate chairs. I just can’t view chairs neutrally! 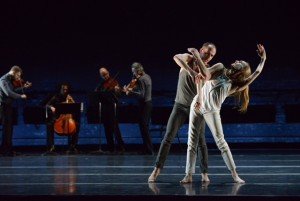 Wendy Whelan, Brian Brooks, and Brooklyn Rider in Some of a Thousand Words, photo by Nir Arieli

Both Whelan and Brooks performed solos, and the quartet also briefly had time alone on stage. In the solo by Brooks, he curved his shoulders and hips as he walked in circles. You could almost see a current being passed from one part of his body to another. The costumes were simple pedestrian t-shirts and pants. The scenic design (I could have done without the strip of pale damask wallpaper  hanging above the musicians for most of the piece) and lighting were also kept fairly simple, so it was easy to concentrate on the dancing and music. I was consistently surprised by discoveries linking them. For example, the dancing transitioned at points from circumscribed movement to larger gestures just as the music started to swell. The parallels between the music and dancing were endless. And the clarity of intention shared between the dancers and musicians was a joy to behold.

I hope these artists continue to work with one another. I’m confident that they have more to discover, and that audiences will find their future collaborations inspirational and just as fulfilling as Some of a Thousand Words.

The Day: Whelan and Beiser and Childs and Lang

Wendy Whelan Lets Her Hair Down