There must be something special about having alliterative first and last names.

Wendy Whelan and Brian Brooks returned to the Joyce Theater last night for a week’s engagement, with a new evening length piece, the New York premiere of Some of a Thousand Words. Even though it might take awhile to get used to (unless you’re already a Brooks enthusiast – or a Whelan enthusiast who doesn’t care what she dances as long as she’s dancing it), it’s worth the effort. The program is one of the better examples of contemporary dance, and, with the bonus of a live built-in concert by the string quartet Brooklyn Rider, is a must see.

Some of a Thousand Words, which premiered this past June at the International Festival of Arts & Ideas in New Haven, CT, is a suite of dances related by style, and perhaps by a generalized visual description of a relationship. The first section is comprised of four movements, and the second is the return of a Brooks dance from their “Restless Creature” collaboration two years ago: First Fall, to which Brooks has added additional choreography. The two dances fit together well – so well, in fact, that the end of one led directly into the other, with only the slightest of pauses. Indeed, First Fall can be seen as a “fifth movement” of the piece as a whole, transforming the overall dance into an evolving story or message – and taking that one step further, the movements themselves are composed of segments, and then further divisible (if one cares to find choreographic seams) into sections of phrases, perhaps accounting for the “thousand words” of the dance’s title. 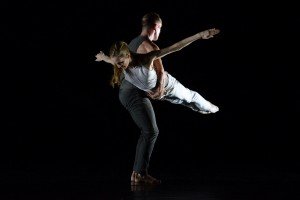 Moreover, the “five” movements together provide a formative education in Brooks’s choreography, which is idiosyncratic, but neither nihilistic nor self-centered, qualities that often plague independent – and not so independent – choreographers. On the contrary, there’s something about it that, despite its somewhat formalistic approach, is both genuine and engaging.

Generalizing any choreography can be difficult at best, and necessarily incomplete, but amid the clever echoes that penetrate and punctuate the choreography as it evolves, and the characteristic motif of Whelan repeatedly falling onto Brooks’s body, if there’s one sense that comes from Some of a Thousand Words, it’s that Brooks’s overall body movement seems a consequence of arm movement. Where the arms go, the torso and legs and sometimes head follow, and when the arms stop moving, everything stops moving. At times this is less apparent than others – indeed, the better (in visual terms) the Movement or segment looks, the closer the connection with movement from one part of the body to another looks – or vice versa.

This idiosyncratic style is evident from the outset of the First Movement. To music by Jacob Cooper (Arches), a cello solo played by Michael Nicolas, Brooks and Whelan emerge from upstage center, slowly swaying their arms in sync as they move down stage. Gradually, very gradually, the basically parallel arm movement grows broader, reaching out and up, and times mimicking the position and anticipating the movement of helicopter blades. The dancers’ torsos follow the movement of the arms, appearing at times ready to be lifted off the stage. Eventually the tempo quickens, as does the arm motion, becoming less synchronized as this segment of the dance progresses, but the arm movement still dictates the movement of the rest of the body. 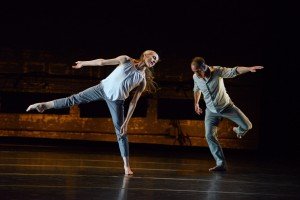 I found this initial Movement least interesting of them all, but not uninteresting. Even though the movement quality is repetitive, Brooks varies body positioning and overall movement such that after awhile it becomes hypnotic, like the music, rather than boring. Upright positions yield to bends and spins, the two separate and move sometimes in sync and sometimes not, reunite, and eventually walk off the stage moving in separate directions. By itself this movement would have been a curious dance, but in context it’s a fine introduction.

And in context it’s also an introduction to the choreographed relationship between Whelan and Brooks; a sort of ‘getting acquainted’ segment in which the two exchange visualized pleasantries but never touch. Indeed, the arm movement that I’ve described might, beyond the form itself, also be seen as the motion of humanoid antennae, sensing another body’s approach and evaluating whether it’s friend or foe, with the progressive relaxation of the arms as the suite of dances proceeds, and the visualized relationship deepens, indicative of these sensory antennae serving another purpose – facilitating and preserving mutual dependence and protection. And it’s noteworthy – though I’m not sure what, if anything, it represents other than an evolution – that as the piece moves from one Movement to another, the dancers’ costumes (designed by Karen Young) change from drab gray tops and bottoms, to white tops and gray bottoms (or the reverse), then to all white.

After the opening Movement, Nicolas is joined upstage right by the other members of Brooklyn Rider – Johnny Gandelsman and Colin Jacobsen (both on violin) and Nicholas Cords (on viola), and Brooks’s choreography, though still arm-propelled, becomes more visually interesting. To the sounds of Tyondai Braxton’s ArpRec 1, a piece of what’s called “generative” music – as I understand it, music that is set, or programmed, by outside electronic forces, perhaps using some mathematical algorithm (although it’s obviously played live) – Brooks has choreographed a multi-faceted dance that begins as an expansion of the First Movement, and then expands it significantly further.

After a brief “overture” Whelan enters and proceeds to dance solo, swinging her arms in a manner similar to the First Movement, but adding somewhat independent head and leg motion in contrary directions – all somehow still arm-directed. [Again, distinctions between the musical accompaniment and the piece’s movements are not clear, and I’m not certain where one piece of music ends and another begins. Suffice it to say that the Braxton piece is followed by an original composition by Brooklyn Rider’s Jacobsen (titled BTT), and the Jacobsen composition by a selection of music composed by John Luther Adams. Somehow they all work as part of a whole.] This is not awkward movement; on the contrary, the segment is as musical and graceful as any ballet solo, just different, and it doesn’t restrict Whelan’s innate fluidity in any way – even when she moves to the floor. 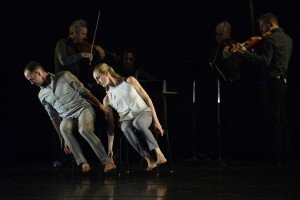 At the end of Whelan’s solo, Brooks joins her, bringing with him a chair, and later another. In a series of sequential mini-scenes, the two engage in a sort of game of musical chairs, although I doubt that that’s the point. Rather, I think the segment is intended to reflect a level of disagreement and tension, and a lack of certainty of who they are or where they’re supposed to be in relation to each other. It’s fun to watch – but there’s nothing comical about it.

And then something happens; the chairs morph from being emblematic of disagreement to being mechanisms for change, as Whelan begins to fall sideways onto Brooks; sliding off the chair (or both of them set together) onto him; or standing on a chair and falling down.

This segment is followed by a solo for Brooks, which is a brilliant contemporary take on individual angst (without being preoccupied with the fact of it) as if he’s at some sort of crossroad; a deep and heartfelt soliloquy. It’s beautifully done. And then in the final “new” (fourth) Movement, the pair return to the stage together, this time without the separation or the implicit tension. They touch each other. Whatever barrier there was has been broken. 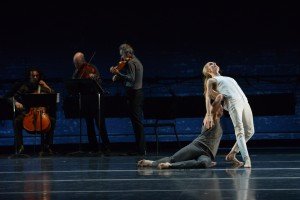 The revised First Fall, the dance’s Fifth Movement, follows. Originally commissioned by Damian Woetzel for the 2012 Vail International Dance Festival, I reviewed it when it was a component of Whelan’s “Restless Creature” program at the Joyce two years ago. It took awhile, but the vision of Whelan repeatedly falling onto Brooks, her reliance on him, and his concern for her, all as part of an evolving relationship, gave the piece a sense of purpose, and ultimately won me over.

Supplemented by the additional choreography, First Fall has now become much more significant a piece on its own, and a glorious capstone to the evening-length dance as a whole: a “sum” of the thousand words. Choreographed to spiritual-sounding music by Philip Glass from String Quartet No. 3 (Mishima), it’s a celebration: a paean to the nature of a mutually dependent, independent, and satisfying relationship; the culmination of the hesitation and the separation on display earlier. The two of them more than finally touch each other; they’re connected physically and emotionally – all in the context of a contemporary dance that shows no overt emotional gloss; it’s all in the choreography and the execution. The heart soars as the dancers do, and falls with each fall as if falling in love over and over again.

The additional glorious balletic lifts, the overall lyricism (it’s not ballet, but Whelan has rarely looked better), and those falls (there seem to be more of them, and with greater visual variety), elevate the dance to the level of a masterpiece.

Some of a Thousand Words will be performed at the Joyce through March 5.

The Day: Whelan and Beiser and Childs and Lang

Wendy Whelan Lets Her Hair Down