First off, bravo to Whim W’him and Olivier Wevers for their longevity and their persistence and patience in pushing through the pandemic of the past two (long) years. Opportunities for seeing in-person shows have been very limited and even now presentations have been sparse, and it feels like we’re just now emerging, having learned how to cope through means such as live-streaming performances, or in some cases deferring performances altogether.

So I was very happy and blessed to be able to attend Whim W’him’s opening night of its Winter 2022 program at the Cornish Playhouse where I enjoyed three dances, each of which was new to me, two of which were premieres. 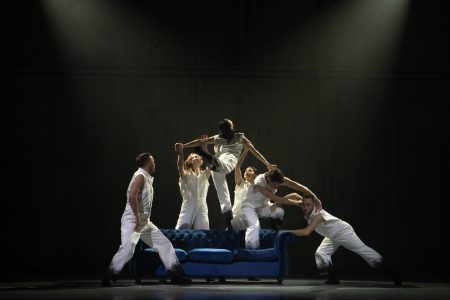 Jakevis Thomason has a true sense of composition and his Convenient Arrangements was a really good, clear, clean, and cheerful opener. I think there is an unwritten choreography rule that everyone has to create at least one “chair piece,” and in this case, it is a blue couch. This couch was more than a piece of furniture — it became a prop that was turned, twisted, moved, and manipulated around such that it was almost one of the cast members. I enjoyed its Rumba-inspired theme and appreciated how well Thomason built his dance — you could really see it going someplace. He made good use of the 6 dancers — Michael Arellano, Liane Aung, Jane Cracovaner, Nell Josephine, Andrew McShea, and Karl Watson — ranging from short solos to duos and the entire group, with these groupings sometimes juxtaposed.

A good, solid piece of dance fun, Convenient Arrangements is a keeper. It featured an original composition by Devan Monroe and costumes by Rob Newton. 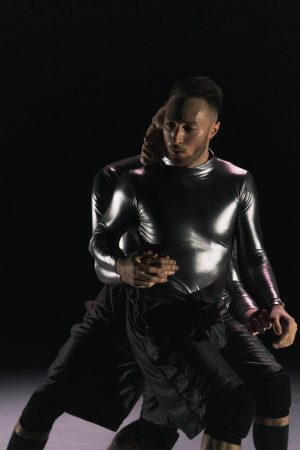 I don’t know if it was intentional, but the soundscore for Mark Caserta’s Underlove impressed me as similar to the recorded whale sounds that were so popular a few decades ago — at least I thought I heard that within it. With its Star Trek-like costume tops, the work gave the impression of something futuristic — Marvel superheroes meets “Game of Thrones,” meets what I’m not sure exactly but it struck me as interesting and certainly held my attention. I missed its September 9, 2021 Vashon Center for the Arts premiere and was happy that Wevers chose it to round out the program, especially given that due to time constraints he was not yet able to complete his own contribution. Hopefully, Wevers’s new piece will surface in the not-too-distant future.

Underlove has an original composition by SLOWDANGER and used a lighting design by Becca Blackwell, adapted by Michael Mazzola, with costume designs contributed by the choreographer. 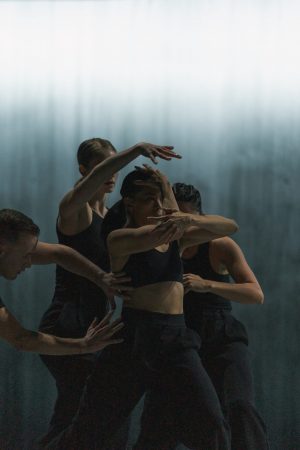 Ethan Colangelo’s a vanishing thread, was, to me, the least formally structured — no form for form’s sake, but was perhaps the darkest and most serious of the trio of works. At once simple and intricate, it was thought-provoking and one that I’d like to see again.

Whim W’him’s Winter Program repeats on Vashon Island on the 26th and on Whidbey Island the next evening.

Whim W’Him: A Trail of Souls