When Whim W’Him’s Artistic Director, Olivier Wevers created the overarching theme “Figurate” for the  company’s 2017-18 season, he could not have foreseen upon commissioning the three new works for the January run of “Configurate” just how connected the thematic outcome of these works were in their final form. 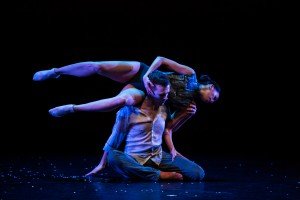 Joinery by Gabrielle Lamb is partly described as “…ideas about breakage, the notion that broken things, people, and connections are worth repair.” Wevers’ own contribution of 6 love letters explored the effects of his own family’s dealing with deterioration, stress, anger, and alienation. The last work, Seed, by Ihsan Rustem, used the actual life character, it would seem, of dancer Karl Watson (it was also a showcase for him) depicted in short unsettling scenes.

In theme at least, these works seemed to me to be of a palette, exploring and probing the human condition. 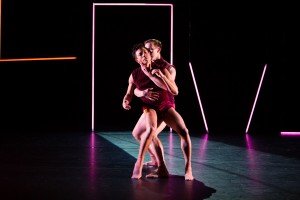 The last, 6th section of 6 love letters — all to the poet of the piano, Chopin, immediately impressed me as a mini-masterpiece; a true dance, at the moment Watson and Liane Aung entered and then reversed and changed positions. It was poetic and heartfelt — and a very good dance.

6 love letters employs a spartan and effective set of letters spelling out the word “LOVE,” with each letter at a different height. The “O,” set as a three-quarter rectangular door shape, was used just as that — one of the means of ingress and egress by the dancers. The work showcased Wevers at perhaps his most lyric. 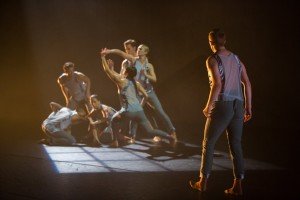 Lamb made a large-scale group work. The entire company was cast. But by large-scale, I don’t only mean that Lamb used all seven dancers; rather, she was able to successfully tackle a universal theme.

I tend to be a night owl and sometimes treat myself to the early ’60s TV series The Twilight Zone (12:30 a.m. on MeTV in Seattle) and found many parallels between it and Seed. Watson finds himself caught up in a nightmare not of his own making, where strange and competitive outside forces thrust themselves upon him. These forces are suggested by the very names the choreographer has given the cast of dancers: Karl (Watson); God (Cameron Birts); Devil (Tory Peil); Stone (Mia Monteabaro); Desire (Liane Aung); Shadow (Adrian Hoffman); and finally Sea (Jim Kent). 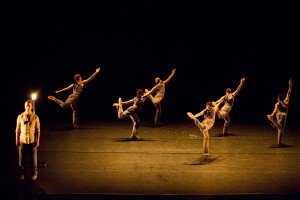 My only suggestion, should this very strong program be replayed in the future, would be to place Seed as the middle work, it being the darkest of the trio. Although 6 love letters may have had a disturbing and quite emotional basis for its birth, it came across actually as very kind, tender, and as the name suggests, one imbued with love. So, for me, it would have been a swell work from which to have gone out into the chilly Seattle night.

Whim W’Him continues to emblazon the dance community with works that engage, unsettle, cause discourse, and happily, as this program shows, uplift. I look forward to its spring program entitled “Transfigurate,” which will take place from June 8 – 16, again at the Cornish Playhouse.

Whim W’Him: A Trail of Souls