Two incidents in my ancestral past were brought to mind by Whim W’him’s latest bill, 3 x 3, where two of the three works depicted immigrant journeys, at least it appeared so to me. The first was how my maternal great grandfather had the courage to bring his family and emigrate from a border town in what is now Poland (sometimes it was in Germany, sometimes in France, depending on who won the latest skirmish) to, of all places with a great name in the US, Sheboygan, Wisconsin, in 1847, the city itself having only been established in 1846. 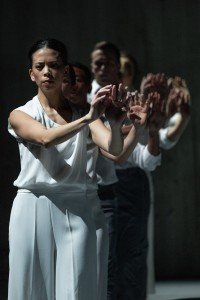 The other was my maternal great grandmother who had the wonderful name of California Van Hagen Bogue (whose own mother left Holland with her husband as they were not allowed to marry there due to class differences) who survived an 1867 shipwreck off the coast of Central America. In each case, I’ve asked, Why did they move initially? How did they overcome what difficulties they must have encountered and how did they make do? What was their community and how was it re-built?

Olivier Wevers’ Trail of Soles (which features many pairs of shoes on stage, used in various ways) is a very strong piece that shows the isolation and bias toward one person, danced by Cameron Birts, and how his relationship with the other cast members changes and evolves as they, individually and as a group, face the unknown. Set to the hauntingly beautiful score of Polish composer Henryk Górecki (I think his Symphony No. 3, Op. 36, also known as the Symphony of Sorrowful Songs), Trail of Soles is a mature choreographic work that bears repeating and seeing again. 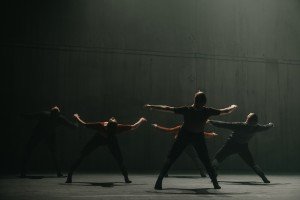 Likewise, Zoe Scofield’s This mountain is also a mature work by an experienced choreographer who understands and effectively deploys classic compositional tools that build into a moving dance. It begins with the cast upstage in a narrow curtain opening, moving toward the audience in a walking pattern where they take turns in front of and replacing each other, passing one front to back. The work states its theme well, develops it, and then returns to its opening motif. The dance also spoke to me of a body or community of individuals migrating and changing due to circumstances.

Yin Yue made the first work on the program, The Most Elusive Hold which I found to be a mercurial dance that challenged its cast of five dancers, Liane Aung, Jane Cracovaner, Adrian Hoffman, Jim Kent, and Karl Watson, with a dense amount of complex material in a relatively quick pace throughout. 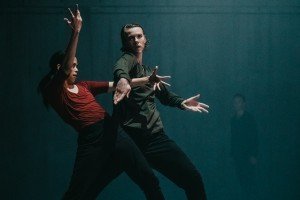 Bravo to the Whim W’him dancers for their bravery in venturing out with three new works, each a good challenge and “main-stage worthy.” Aung, Birts, Hoffman, Kent, Mia Monteabaro, Cracovaner, and Watson make a great team and it’s a joy to see them in the programs and how they adapt to the varying demands each choreographer places on them.

Next up is Wevers’ collaboration with Early Music Seattle in Pergolesi’s Stabat Mater, February 23 and 24th.